Home Entertainment Christopher Morahan, a Producer and Director of ‘The Jewel in the Crown,’... 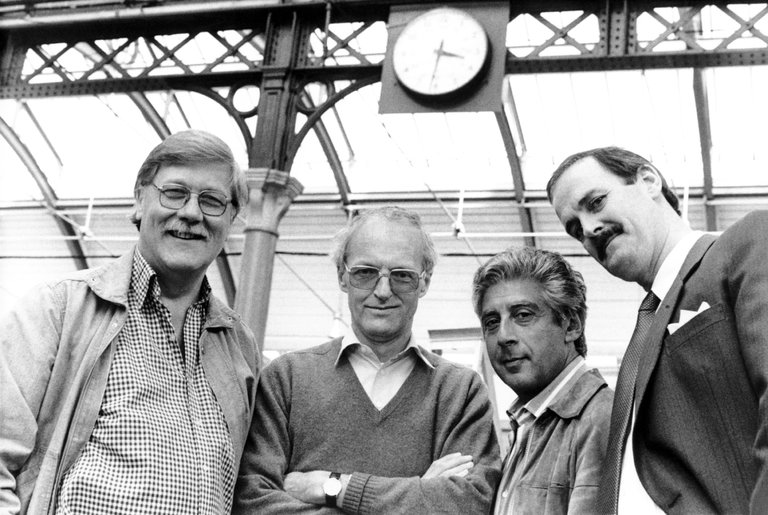 The director Christopher Morahan, far left, with, from left, Michael Frayn, Michael Codron and John Cleese on the set of the film “Clockwise,” in 1986.

Christopher Morahan, whose many productions for British television included the acclaimed 1984 drama series “The Jewel in the Crown,” about the last days of British rule in India, died on April 7 in Guildford, Surrey. He was 87.

The death was confirmed by his daughter, the actress Hattie Morahan.

Mr. Morahan was well known as a producer and director for stage and television when Denis Forman, the chairman of Granada Television, asked him to translate the four India novels by Paul Scott, known as “The Raj Quartet,” into a television series.

Filmed on location in India and broadcast in Britain by ITV in 14 parts, four of them directed by Mr. Morahan, “The Jewel in the Crown” was hailed as a superlative example of high-style period drama, an almost proprietary art form on British television. The cast included distinguished veterans like Peggy Ashcroft, Janet Henfrey and Charles Dance, along with newcomers and lesser-knowns like Art Malik and Tim Pigott-Smith, who died on the same day as Mr. Morahan.

“It was Morahan’s decision to shoot that series on film, to use archive footage to provide historical perspective and to cast a number of then relatively little-known actors, including Pigott-Smith, Art Malik and Susan Wooldridge, in lead roles,” the theater critic Michael Billington wrote in The Guardian. “If the result was a triumph, much of the credit belongs to Morahan.”

In his review for The New York Times, the critic John J. O’Connor called the series “superb drama of reverberating substance.” More than “engrossing television,” he added, it was “important television, a model of what the medium can do.”

Christopher Thomas Morahan was born on July 9, 1929, in London. His father, Tom, was a production designer for film, and his mother, the former Nancy Barker, had worked in the industry as well.

After attending Highgate School and completing his obligatory military service, Mr. Morahan spent nine months acting in a repertory company in Henley-on-Thames. In 1947 he enrolled in the Old Vic’s theater school.

Finding the theater culture of the time unadventurous, he gravitated to television. He worked as a floor manager for the medical soap opera “Emergency-Ward 10” and soon found himself sitting in the director’s chair.

“It was like the Wild West,” Mr. Morahan recalled in a 2010 interview with the film scholar Colin MacCabe. “If you rode into town and only had a pair of pistols, you could get a job. Or nerve to say, ‘I want to be a director’ — they said, ‘Fine, O.K., start.’”

Mr. Morahan went on to direct episodes of the police dramas “Z-Cars” and “Probation Officer,” and many plays for the BBC. He made his mark with two television plays by John Hopkins, a writer he had met on “Z-Cars.”

Mr. Hopkins’s “Fable,” broadcast in 1965 on the BBC, criticized the apartheid regime in South Africa by imagining a Britain in which whites were oppressed by a black majority. A year later, Mr. Morahan directed Mr. Hopkins’s “Talking to a Stranger,” a four-part drama revolving around a suicide that each family member explained in turn. It featured Judi Dench, in one of her first starring roles, as the daughter.

Mr. Morahan made his debut as a stage director in 1967 with Jules Feiffer’s “Little Murders.” He followed with David Mercer’s “Flint” and Harold Pinter’s “The Caretaker,” with Leonard Rossiter in the lead role.

He was hired as head of plays for the BBC in 1972. Over the next four years, he initiated the series “Play for Today” and “Play of the Month” and commissioned “Days of Hope,” a four-part series about working-class life during and immediately after World War I, directed by Ken Loach and written by his frequent collaborator Jim Allen.

He strayed into film on occasion. He directed John Cleese as an obsessively punctual headmaster in “Clockwise” (1986), with a screenplay by Michael Frayn. He directed Bob Peck and Miranda Richardson in a television film of the Simon Gray play “After Pilkington” (1987). Another film for television, “The Heat of the Day” (1989), with a screenplay by Mr. Pinter adapted from the World War II novel by Elizabeth Bowen, had a cast that included Michael Gambon, Patricia Hodge and Michael York.

Mr. Morahan’s first wife, Joan Murray, died in 1973. In addition to his daughter Hattie, seen most recently in “Beauty and the Beast,” he is survived by his wife, the actress Anna Carteret; another daughter, Rebecca Morahan, a theater director; his sons, Ben, a film production designer, and Andy, a director of films and music videos; and four grandchildren.