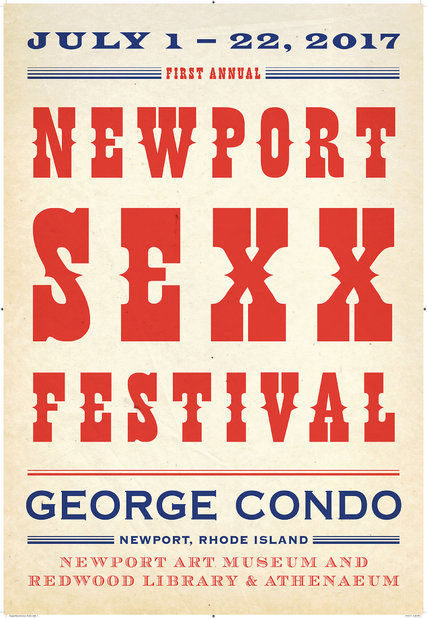 The first Art & Newport festival will include seven George Condo paintings in a show that he is calling “The Newport Sexx Festival.”

Newport, R.I., has long been famous for its music festivals. But public art there has been less abundant. Dodie Kazanjian, a native of that city who covers the art world for Vogue and is the director of Gallery Met at the Metropolitan Opera, is about to change that, with a low-key opening, as she put it, of the first Art & Newport festival.

“Newport has a long history as a place for artists,” Ms. Kazanjian said. “Luminists like William Trost Richards and Fitz Henry Lane came and painted here. And over 40 years ago, we had Monumenta, the international exhibition of public sculpture.”

Ms. Kazanjian has invited four artists to create works in three Newport institutions. Seven paintings by George Condo, in a show the artist has called “The Newport Sexx Festival,” are at the Newport Art Museum (plus one at the Redwood Library & Athenaeum); a poster declaring as much reworks a 1959 Newport Jazz Festival poster and will be for sale in a limited edition to benefit the museum (through July 21).

The video artist Tony Oursler has filled a tent on the museum grounds with floating heads and a smoke machine — a display that Ms. Kazanjian said would discombobulate the senses (through July 9). Shara Hughes, who was part of the recent Whitney Biennial, has taken over an octagonal folly at the Redwood, filling it with an imaginary landscape, among other elements (through Sept. 21). And at Trinity Church, the altar is to be animated by a wind-powered cloth sculpture by Paul Chan (through July 7).

The festival works will be open to the public starting on Saturday. Information is at newportartmuseum.org.