Home Business When the Kids Crash Your BBC Interview 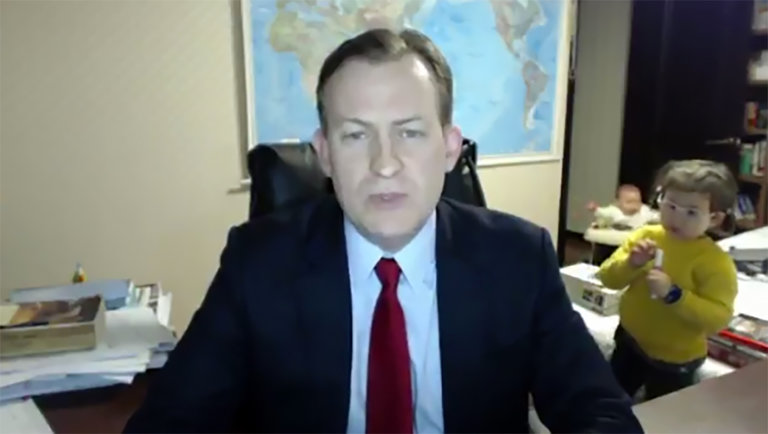 Professor Robert E. Kelly, of Pusan National University in South Korea, was being interviewed on BBC television when his children joined the live broadcast.

There are well known drawbacks to working from home: the isolation, the need for self-discipline.

But here is a new one: the invasion of the toddlers.

Robert E. Kelly, a political-science professor at Pusan National University in South Korea, learned this the hard way on Friday when he appeared as an expert on the BBC via Skype to discuss the South Korea impeachment scandal.

He appeared to be in a home office, with a door closed behind him. Shortly before the interview, he innocently let his Twitter followers know he would be on TV.

Then, as the questioning began,, the door opened. A child toddled in.

Then another strolled in, this time in a squeaky walker. And then a woman burst into the scene, skidding around a corner and frantically trying to herd the wayward young people out the door.

She knocked books off a table before falling to her knees and grabbing the handle to close the door, finally, behind them all.

The interruption, almost slapstick if it had not been real, was over within 40 seconds, during which Professor Kelly veered from apparent mild annoyance to repeated apologies to stifling smiles, while ultimately keeping his composure as he discussed the latest political drama underway in South Korea, where a court had removed President Park Geun-hye from office.

The toddler intrusion starts just as the BBC World presenter starts to ask him a question.

“And what will it mean for the wider region — I think one of your children has just walked in,” the presenter said to Professor Kelly.

He continues, gamely: “Do you think relations with the North may change?”

“Umm I would be surprised if they do … the um … pardon me. My apologies,” Professor Kelly said, closing his eyes and smiling — or grimacing — as the sound of the objects toppling off the table and squeals of protest came from behind him.

While the professor appeared to do his best to keep the live broadcast on an even professional keel, the clip was inevitably destined to do what these things do: spread widely across the internet.

Yes, it did “get weird.” News organizations and television channels, including Buzzfeed, The Guardian and CNN, picked up the story. Online, many of the comments were sympathetic (“This is TV Gold!” said one), while others said that Professor Kelly had “strong armed” one of the children when reached behind him to repel her advance, all while keeping his eye contact with the camera and continuing to speak.

Professor Kelly, who is an expert on politics on the Korean Peninsula, has been a contributing guest on the BBC for many years, as well as on ITN News and Sky. Many of his media appearances, chronicled on his YouTube page, appear to take place from the same room, which features a map on the wall and floor-to-ceiling bookshelves.

He could not immediately be reached on Friday, but his online biography and website, Asian Security Blog, notes his academic credentials and many contributions to scholarly publications and news organizations about North and South Korea.