There’s also plenty of time to admire the edifice you’re waiting to enter: three tiered trapezoidal stacks of bronze-tinted gating that sheaths a giant glass box. I had assumed that the gating was iron or actual bronze. Nope. Aluminum. Aluminum siding. But it’s the most vivid, most alive, aluminum siding you’re ever going to see. Obviously, we’re talking about architecture not black hair, but the edges lay perfectly. Designed just a little differently, the gating might have read as defensive, as a meticulous: “Keep out.” But the panels are too porous for combat. They extend cautious warmth, instead: “Take care.”

The trapezoids, we’ve been told, evoke a Yoruba crown, imputing a sense of majesty. You can see that, especially in the museum’s silhouetted logo. Yet viewed from the minor distance of 14th Street and Constitution, with the Washington Monument playing the role of antenna, it’s a fortress. But — unlike, say, the pink marble of its neighbor the National Gallery of Art, or the weathered-looking, curvilinear limestone of the National Museum of the American Indian — the Blacksonian is brown.

In the course of a day, depending on the weather and the light, that aluminum skin turns every shade of that color. In the sunlight, it’s golden, sepia in the shade, red-bone when it’s overcast. At dusk, it’s mahogany and deep chestnut after a cloud gobbles up the sun. The building can be all of these browns without ever getting to black, as if it knows that no black person is actually, phenotypically black. So the building, a mighty, physical construct, memorializes a figurative one. “Black” is the concept that gets unpacked, rebuilt and celebrated within the museum. 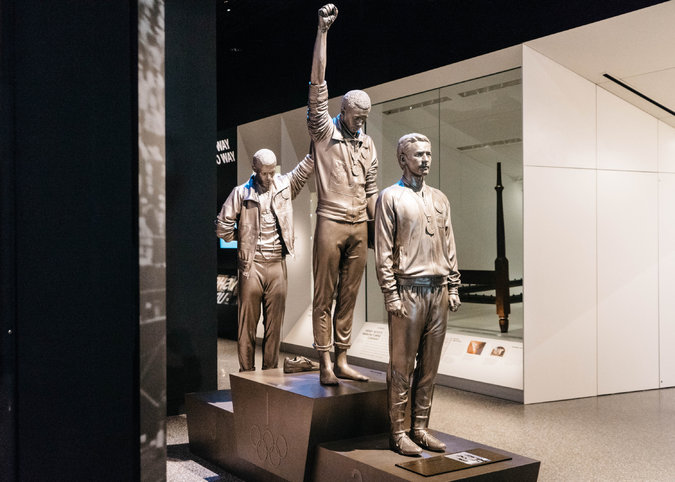 From left, a statue of John Carlos, Tommie Smith and Peter Norman at the 1968 Olympics.

Inside, there’s more waiting to be done — for the very good restaurant, for the ladies’ room, for entry to the museum’s deep lower levels. Building waiting into the experience feels right for a place that tells the story of a people who’ve had to wait for everything else.

The anticipation for the subterranean history galleries already feels mythic. You might know, for instance, that the museum’s narrative history starts underground, and gradually brings you up — into the present, into the ample light that pours through the great glass enclosure. But that doesn’t account for the emotional toll of all the waiting and reading and thinking and connecting and feeling to come.

It doesn’t account for the experience of standing in the immense concourse and seeing the faces of the hundreds of people waiting with you, the endless hues of skin. This standing around is simultaneously boring and one of the happiest, most poignant things I’ve ever done with monotony. Here we all are, imported as Africans, standing around as African-Americans, checking our phones, laughing, talking, taking group selfies, waiting with white people from this country and from Europe, with all kinds of Latinos, all kinds of Asians, all kinds of Arabs, to interact with a version of a story of what America truly is.

During that wait for the underground galleries, natural impatience threatens to upstage the human majesty of it all. You don’t know why it’s taking so long to get there. Once you reach the entrance, you see. You’re waiting for an elevator. The Blacksonian has one pivotal conceit, one metaphorical device that you need to embrace despite its hokiness, despite its comical proximity to a set of stairs, and it’s the elevator.

The elevator is an enormous glass box that comfortably fits about 30 people. The operator welcomes you to a time machine that’s going to carry you from the 21st century to the 15th. It was a device I knew I’d bought into when the operator asked whether we were ready, and I honestly couldn’t say that I was. Despite waiting all morning for this — despite waiting all my life, really — I was overcome with stress. Suddenly, I was unready to see any of the 37,000 procured, purchased and donated objects, even as the box began its descent and landed its cargo at the year 1400. The stress never left. And it probably shouldn’t have. That’s history. It’s heavy.

You just bear the weight as you set forth to graze thousands of chronologically arranged facts, names, photographs, things, explanatory guides, problems. The museum doesn’t tell you how proceed. You’re not doing it wrong, even though a school of museum criticism — and to be fair, some museumgoers — expect hand-holding. Maybe the Blacksonian doesn’t instruct you on where next to graze. But you’re always oriented. And it’s the orientation that gets to you.

Until the installation on slaves’ role in the Revolutionary War, for instance, the ceilings in the galleries are low (Kobe Bryant and LeBron James are among the museum’s big-league donors, and I wish their heads luck). With a crowd, the walkways narrow; the lighting is almost notional, polite, correspondent with one solemn detail after the next. You can see more than well enough to understand that enslaved labor was foundational for the colonies. You can hear that anyone speaking is doing so almost reluctantly. You feel simultaneously overheated and spiritually chilled.

In these early galleries, you’re always in someone’s way. There’s always some image you’re not seeing, some wall text you practically have to kiss in order to read. It’s strange: Here we are, climbing past one another, inspecting the historical molecules that make us us. Objects, stories, illustrations, faces, ideas and legislation will magnetize you to them, will imprint themselves upon you.

That happened to me almost immediately, with the registry-like wall of slave ships. It carries the names of vessels and their countries of commercial origin (always Europe, often Portugal). It specifies the date of disembarkation and tallies the number of passengers versus the number of survivors. The wall appears to be a single structure, full of information that you have to both crouch and get on the tips of your toes to make out. Then you realize that it runs the length of much of one side of the gallery, and that the decorative presentation has fooled then floored you. It’s such a horrifyingly casual display that it becomes grimly amusing before it turns devastating. The awkward presentation feels morally apt. The Atlantic Ocean was once a sloshing highway to transport slaves.

The work you do to see that wall is emblematic of the work to be done by visitors all over the historical galleries. You reach the end of Reconstruction on the lowest level and have to climb a ramp to get to the civil rights era. That doesn’t feel accidental. It’s effort that seems meant as a terribly loaded abridgment of the work black people have always done in this country. Progress is a StairMaster.

The Blacksonian reveals a wicked, poetic sense of humor about this history. You exit that long, tight, airless gallery into a huge open space with virtually no ceiling, and you realize you weren’t breathing. And then you catch your breath only to look up and see, on a platform, a statue of Thomas Jefferson.

Arrayed behind him are rows and rows of bricks painted with the names of some of his slaves — Hercules and Jupiter and lots of Sallys. Surrounding him are equally proportioned statues of Harriet Tubman, Benjamin Banneker, Phyllis Wheatley and the Haitian revolutionary Toussaint Louverture — black people the museum argues are equally important. They loom near Jefferson. They haunt him.

Abraham Lincoln, too, is morally conjoined here, on the abolition of slavery. He is as bound to Frederick Douglass, as Tony Curtis is chained to Sidney Poitier in “The Defiant Ones.” Lincoln’s not a hero at the Blacksonian. He’s a man with a nagging mandate from Douglass to do the right thing. He’s another brick in the wall.

The time machine transports you to other places — to an old slave cabin, a heartbreakingly perfunctory bill of sale for a black girl, the coffin of young, murdered Emmett Till, to photograph after photograph of slaves who radiate a kind of melancholic neutrality. Encountering so many long faces makes you aware of the length of yours. They also dare you to wonder: Who, among these ancestors, was the first to have the audacity to be pictured with a smile?

The wonder keeps growing. How did this country ever evolve from a wall listing the amount paid for so many black people to the wall on the great ground floor featuring the many black people who helped pay to build the museum that would display either wall? How did we get from the funereal assessment of American history below ground to the vibrant galleries on the upper floors that salute black hair, black comedy, black athletes, black scientists, black travel, black art, black body language, Chuck Berry’s Cadillac? (That’s not quite the story down the Mall, at the Museum of the American Indian, and I carried that heaviness around with me, too.)

The Blacksonian takes astonishing care to correct a crucial misrepresentation of slavery. I, at least, am guilty of necessarily focusing on the very real degradation of the work and not on the dignity and ingenuity of the workers. Over and over, the word “skill” appears in the display texts to describe the innovation slaves made to streamline agriculture and industry. Though the labor was evilly got and cruelly maintained, the laborers were innovators, creators and artisans.

We call this place a museum, but to behold its impregnability, to feel centuries of pain and pride, to receive the story of how black people helped forge this nation (first by whip then by will), to find, at the twilight of one historic presidency and the dawn of what promises to be a very different one, that the forging must (must) continue — to see that metal gating reaching up, up, up — is to sense that the Smithsonian’s National Museum of African American History and Culture really should have an additional name, one worthy of all that forging and hammering and ironing out. It should also be called the Blacksmith.

An earlier version of a picture caption with this article referred incorrectly to an auction block that is shown. Andrew Jackson and Henry Clay spoke from it in Hagerstown, Md., in 1830. It was not used in 1880 (slavery had been abolished by then).