But it did include David Letterman humming Pearl Jam songs and declaring, “I can’t tell you what an honor and a privilege it is for me to be out of the house, honest to God.” Here are some of the highlights of the night, from inside the hall and backstage. 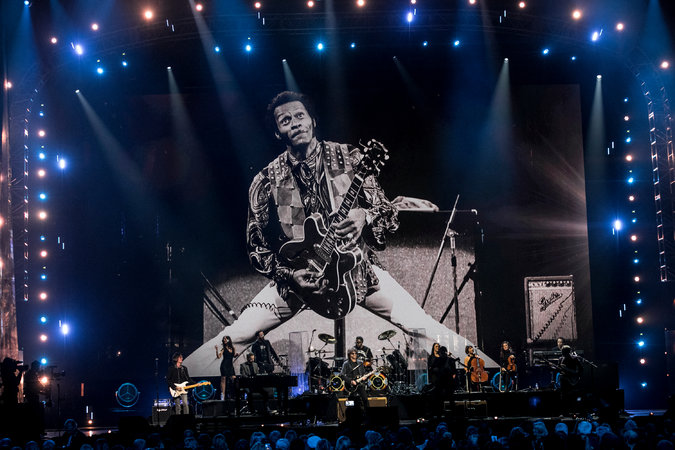 The Rock & Roll Hall of Fame induction ceremony began with a tribute to Chuck Berry, who died three weeks ago, that featured Electric Light Orchestra.

The ceremony opened with Chuck Berry looming large over the night’s music and the Barclays stage itself.

Mr. Berry, who died three weeks ago at age 90, was the first inductee to the Rock Hall, in 1986, and in his opening remarks, Jann Wenner, the founder of Rolling Stone and one of the creators of the hall, said to the assorted stars on the floor of Barclays Center, “No one in this room would be here tonight if not for this man.”

A video montage followed that started the night off with some major rock ’n’ roll gravitas — here was one of rock’s founding gods, just departed, reminiscing about writing his canonical songs of girls and cars, with testimonials from Bruce Springsteen, Paul McCartney and Keith Richards.

Moments later, string players onstage played the opening notes to Beethoven’s Fifth — huh? — and Jeff Lynne led Electric Light Orchestra in a version of “Roll Over Beethoven.” As they played, still images of Mr. Berry, guitar in hand, were displayed on the huge stage backdrop, like a guiding spirit. BEN SISARIO

It was obvious before anyone even said the band’s name. Mr. Wenner opened the night by sharing a few kind words about the inductees to polite applause from each act’s live fan contingent. Then came Pearl Jam’s turn. “And last—,” Mr. Wenner said before he was drowned out by roars from the Seattle band’s super-faithful. The standing ovation — which came hours before the group was actually inducted — lasted more than a minute. And that’s not including the chant for the frontman, Mr. Vedder (“Eddie! Eddie! Eddie!”) that followed. “Is that Pearl Jam?” Mr. Wenner asked. It was. JOE COSCARELLI

Yes, We Are Old

Classic rock radio is filled with big names that have been waiting years and years and years to make it into the Rock & Roll Hall of Fame. But lately some of those who were kept out in the cold — Deep Purple, Kiss, Chicago, Genesis — have finally gotten in, and this year the gates opened for Yes (eligible since 1994), Electric Light Orchestra (since 1996) and Journey (since 2000).

Early in the night, Mr. Lynne of Electric Light Orchestra basked politely in the victory: “Everything comes to him what waits.” Neal Schon, the Journey guitarist, said, “I thought it would never happen.”

But all that time takes its toll! The saltiest reminder of this came from Rick Wakeman, Yes’s keyboardist. In performance, he wore a black and silver wizard’s cape, but at the microphone, Mr. Wakeman, 67, was more like a foul-mouthed uncle. He reminisced about sneaking out to a strip club as a young man, only to meet his father. Then, in the too-much-information department, he thanked the ceremony’s organizers for putting his band early on the bill, and explained why, with a detailed and colorful recounting of a recent prostate exam.

Yes’s rapid-fingered keyboard solos will never sound the same to me. B.S.

Nile Rodgers, the guitarist and producer, would have plenty of reason to make some snide digs about finally getting into the Rock Hall. His band, Chic, the group that straddled disco and funk and had some of the biggest hits of the late ’70s, was nominated 11 times, more than any other act in the hall’s 32-year history — and still they didn’t make it. When Mr. Rodgers was finally accepted this year, it was with the Award for Musical Excellence, and it went to him alone, not his band.

But accepting the prize, Mr. Rodgers seemed totally openhearted. He boasted a bit about his decades of success — hey, it is the Hall of Fame, after all — but, playing more the producer than the star, he thanked all the musicians he has worked with.

“This award, which is amazing,” he said, “is because of all the people who let me come into their lives and join their band,” and then came the list, which was long and could have been longer: Mick Jagger, Madonna, David Bowie, Daft Punk, Diana Ross, Sister Sledge…

Backstage, though, Mr. Rodgers made clear that all the snubs were not forgotten. After a reporter asked him how it felt to be passed over 10 times, Mr. Rodgers corrected him. “Eleven, bro,” he said, “Eleven! Eleven times and not gotten in.” B.S.

A Cameo From an Old Friend

David Letterman, who gave the induction speech on behalf of Pearl Jam, got almost as big of an ovation as the band itself. The big-bearded former late night host was a last-minute addition in place of Neil Young, who called in sick. “The poor guy just can’t stay up this late,” Mr. Letterman said. “It was either that or he swallowed a harmonica.” He went on like that, in classic Letterman monologue form, deftly maneuvering between dry quips and earnest praise of Pearl Jam. He praised the band — “a true living cultural organism” that fights against injustice — for its mid-’90s fight against “those beady-eyed bloodthirsty weasels at Ticketmaster.” It’s thanks to that boycott, Mr. Letterman said, that “all concert tickets in America are now free.” J.C.

A Political Singer Does Her Thing

The video montage that showed Joan Baez arm-in-arm with Martin Luther King Jr. set the tone for her inevitable social justice moment. Always an activist, Ms. Baez closed her speech with a spirited riff on the current political moment, urging artists and fans alike to “fight against an evil tide.”

“Where empathy is failing, and sharing has become usurped by greed and lust for power, let us double, triple and quadruple our own efforts to empathize,” she said. “Let us together repeal and replace brutality and make compassion a priority. Together, let us build a bridge — a great bridge, a beautiful bridge — to once again welcome the tired and the poor. And we will pay for that bridge with our commitment.”

In case there was any doubt to whom she was referring, Ms. Baez ended her rendition of “Swing Low, Sweet Chariot” with the line “carry me — you, us, even Donald — home.” She followed that with a pointed cover of Woody Guthrie’s “Deportee (Plane Wreck at Los Gatos),” joined by Mary Chapin Carpenter and the Indigo Girls. J.C.

In one of the sharpest speeches of the night, Ms. Baez made room for both politics and levity. Before her riff on social justice, the folk singer opened strong with a joke, thanking the Rock Hall for bringing her career to the attention of young people, who “would have no clue who I am” without the honor. “My granddaughter had no clue who I was until I took her backstage at a Taylor Swift concert, where she got a selfie, an autograph, a T-shirt and newfound respect for her grandmother,” Ms. Baez said. (Ever humble, she left out the part of the story where she graced Ms. Swift’s stage with Julia Roberts.) Later, Ms. Baez, 76, referred to music’s journey “from vinyl to digital and everything in between — and back to vinyl.” And she told no lies: Ms. Swift’s “1989” LP is in stores now. J.C.

Before the all-star musical tribute to Tupac Shakur — which included a somewhat incongruous Alicia Keys piano medley of his hits followed by more fitting cameos from YG, T.I. (in full ’Pac regalia) and Treach of Naughty By Nature — Snoop Dogg did the inducting honors with intimate stories from the days of Death Row Records. He recalled meeting Tupac, whom he dubbed “the greatest rapper of all time,” at the wrap party for the film “Poetic Justice” in the early ’90s. “Pac passed me my first blunt,” Snoop said. “That’s right — Tupac is the one that got Snoop Dogg smoking blunts. I was a Zig-Zag man before that,” he added, in reference to the rolling paper brand. “We became very good friends quickly thereafter.”

Snoop also recalled a vacation he and Tupac took to South America with their label boss Suge Knight. “Me and Pac was parasailing,” Snoop said, noting that he had just beat a murder charge. “You heard right: Snoop Dogg and Tupac parasailing together, with Suge Knight driving the boat.”

“Does anybody know what parasailing is?” the rapper asked the crowd. “’Cause we damn sure didn’t.” J.C.