Home Lifestyle Art A Chat With a Live Streamer Is Yours, for a Price

YouTube began a test of Super Chat on Jan. 12 and followed with a wide rollout of the feature on Feb. 7. Now any YouTube streamer with more than 1,000 subscribers who is registered with YouTube’s Partner Program — which allows users to earn money from videos through advertising — can enable Super Chat during a live stream.

“For creators, Super Chat does double duty: keeping their conversations and connections with (super) fans meaningful and lively while also giving them a new way to make money,” said Barbara Macdonald, a product manager at YouTube who worked on Super Chat.

Twitch has a feature similar to Super Chat called Cheering, begun in June 2016, which lets viewers “tip” streamers during a live stream. Viewers “cheer” by using “Bits,” virtual goods that come in the form of animated gem-shaped emoticons. Viewers can buy Bits directly from the chat window; there are different colors and sizes starting at $1.40 for 100 Bits. Streamers receive one cent for every Bit used in their chat.

“Twitch viewers are very savvy and in tune with their favorite casters, so they are aware that their support is what enables their favorite streamers to broadcast full time,” said Matt McCloskey, the vice president for commerce at Twitch.

Super Chat and Cheering are more than about money — they also offer another way for streamers and their audiences to bond and converse. T. L. Taylor, a professor of comparative media studies at the Massachusetts Institute of Technology, said real-time interaction with audiences in live streaming — particularly in the genre of video game live streaming — was increasingly becoming a crucial part of the experience. 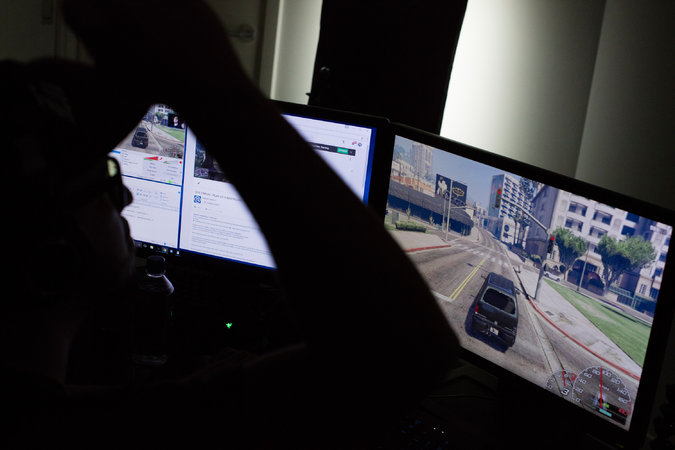 In January, Mr. Robelo made $4,000 from comments during a 90-minute live stream.

“Game live-streaming taps into the longstanding pleasure of spectating other people’s play,” Dr. Taylor said. “Live streamers are adept at connecting with the folks watching them, drawing them out and into the play experience.”

YouTube and Twitch have experimented with other ways to profitfrom content in the past, including subscription services and merchandising. YouTube introduced its subscription service, YouTube Red, in late 2015, in which members pay a recurring fee to watch their favorite channels without ads.

On Twitch, while all channels are free, subscribing to a channel gives viewers perks like subscriber-only chat, subscriber-only emoticons and discounts on merchandise. Subscriptions on Twitch are generally around $4.99 a month.

But features like Super Chat and Cheering feel more personal.

“Some people just like to let me know that my videos make their day, what video is their favorite, suggestions for future live streams and over all just to increase the odds of their comments being seen and for me to say their name,” Mr. Rebelo said.

There may be a downside to the new features, said Michael Pachter, a Wedbush Securities analyst. He said it was hard to predict how audiences would react once they were asked to pay for interactions with live streamers.

“Super Chat is probably destined to fail,” Mr. Pachter said. “I think that the business model is flawed, and I think the ability to ‘buy’ a spot in the queue is going to turn off a lot of fans.”

A YouTube spokeswoman said there had already been “hundreds of thousands” of Super Chat purchases since the product launched. “While anyone could make predictions, we’ve been really encouraged by the early adoption and engagement on Super Chat,” the spokeswoman said.

Yet some internet commentators are not impressed. In February, We the Unicorns, a news site about YouTube personalities, called Super Chat “the weirdest YouTube feature yet,” arguing, “We’re all for fans of YouTubers supporting their faves financially however they want, especially if they get something in return; but should the payoff really be a few extra seconds of attention in a chat room?”

Digby Lewis, the former director for brand strategy at BuzzFeed, also publicly expressed concern in an opinion piece for The Drum, a magazine focused on the marketing industry. He said paid comments fomented self-promotion by creators and could raise ethical questions about whether comments are for the creator or the community of viewers.

“A positive contribution deserves to rise to the top because of its value to the community, not because someone has a financial advantage,” he said in the op-ed essay.

For now, live streamers seem to have embraced Super Chat and Cheering. Mr. Rebelo said no one seemed put off by Super Chat during his Grand Theft Auto V live stream — though a few people did wonder whether he was getting the money from the stream, or if YouTube was.

And while the top streamers can earn in the millions of dollars from advertising and other sources, for everyone else, ads may simply not be enough to survive on.

Clintus McGintus, 35, a YouTube video blogger from Phoenix, used Super Chat in January for his channel, Clintus.tv. During a 30-minute live stream of him walking around his local Target store, he made almost $900 through Super Chat.

“This is my business and how I pay the bills,” Mr. McGintus said. “Super Chat is the next level. Tipping on stream and getting a shout-out or having your comment read by the content creator is a great feeling.”