Home Entertainment ‘A Dog’s Purpose’ Premiere Is Canceled Amid Outrage Over Video of Distressed... 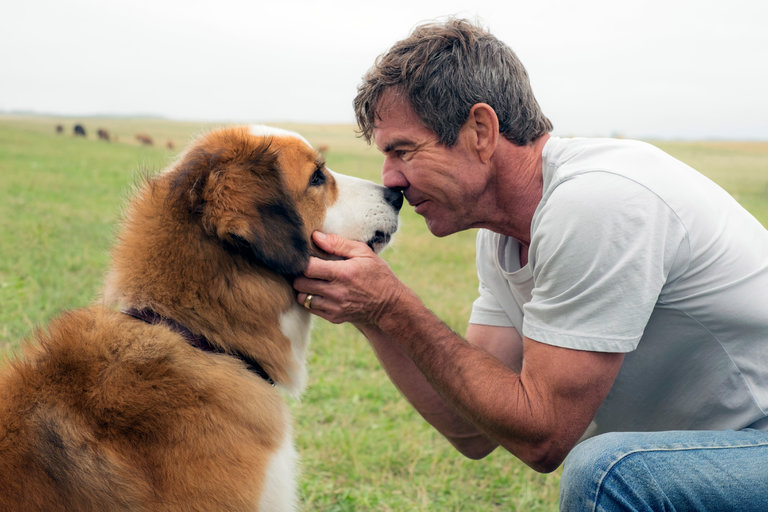 Dennis Quaid in a scene from “A Dog’s Purpose.”

The red carpet premiere for the film “A Dog’s Purpose” scheduled for Saturday has been canceled amid calls for a boycott after a video surfaced on Wednesday showing a German shepherd being forced into rushing waters during filming.

In the video, obtained by TMZ, the dog appears to be fighting to stay out of the fast-moving stream as a man in a green suit wrestles to put the animal in. The footage then cuts to a scene of the dog submerged as people swim toward it. A voice can be heard yelling off-camera: “Cut it! Cut it!”

The source of the video, recorded in 2015, was not immediately clear, but the filmmakers have not disputed its authenticity. The identity of the man in the video was also not immediately revealed.

Amblin Entertainment, the film’s producer, and Universal Pictures, its distributor, said in a joint statement on Thursday night that it was in the “best interest” to cancel the premiere and press junket set for Saturday in Los Angeles. The statement said Amblin’s review into the video was continuing. The movie, starring Dennis Quaid, will open in theaters nationwide on Jan. 27 as scheduled.

“Amblin and Universal do not want anything to overshadow this film that celebrates the relationship between animals and humans,” the statement said, adding: “Since the emergence of the footage, Amblin has engaged with many associated with the production of the film, including safety personnel, trainers and stunt coordinators as part of their in-depth review. While we are all disheartened by the appearance of an animal in distress, everyone has assured us that Hercules the German shepherd was not harmed throughout the filmmaking.”

In a statement on Wednesday, Amblin and Universal said Hercules was “happy and healthy.”

“There were several days of rehearsal of the water scenes to ensure Hercules was comfortable with all of the stunts,” the statement continued. “On the day of the shoot, Hercules did not want to perform the stunt portrayed on the tape, so the Amblin production team did not proceed with filming that shot.”

For a movie aimed squarely at an audience of dog lovers, the footage threatens to repel the precise audience filmmakers hope to draw.

People for the Ethical Treatment of Animals has urged moviegoers to boycott the film.

Several people involved in the film condemned the actions seen in the video. Lasse Hallstrom, the director, said on Twitter he had not witnessed the events but was “very disturbed” by the footage. He said he had been promised “a thorough investigation.”

“We were all committed to providing a loving and safe environment for all the animals in the film,” he said. “I have been a lifelong animal lover, and ‘A Dog’s Purpose’ is my third film about dogs. The animals’ safety was of utmost priority.”

Josh Gad, an actor who voices one of the dogs in the film and said he was never on the set, released a statement on Twitter that said he had “signed on to a film that truly stands out as one of the most beautiful love letters to animals I have ever seen.”

He added he was “shaken and sad to see any animal put in a situation against its will,” and had contacted the production team and studio to ask for an explanation.

Mark Stubis, a spokesman for the American Humane Association, which monitors animals on movie sets, said in a statement that a representative had been present during filming. The employee was later placed on administrative leave, and the organization was “bringing in an independent third party to conduct an investigation,” according to the statement.

“When the dog showed signs of resistance to jumping in the water, the scene should have been stopped,” Mr. Stubis said.

The movie, whose cast also includes Peggy Lipton, is based on a book of the same name by W. Bruce Cameron. He wrote on Facebook on Wednesday that he was “as disturbed as you were by the video I saw earlier today.”

Dog lovers on social media appeared to be unforgiving.

“This was abuse, and that human shoving the dog into the water should be charged,” one woman wrote in response to Mr. Cameron’s post. “It is inexcusable, and I won’t be spending money to see this movie.”