On the lower outer panels, people look on — some more interested than others. The upper register portrays three enthroned figures: In the middle might be God or Christ — experts are not sure — flanked by the Virgin Mary on the left and John the Baptist on the right.

On the upper outer panels, angels sing and play music. Adam and Eve, in one of the earliest renderings of them naked with fig leaves, stand on the outermost wings. The upper outside register represents scenes from the Annunciation of Mary and the lower register has sculptures of St. John the Baptist and St. John the Evangelist.

The altarpiece has a dark side as well. Pieces of it have been stolen repeatedly over time, including by the Nazis, who stored the entire work in a salt mine for most of World War II.

In fact, one panel, “The Just Judges,” in the outer left corner on the inside, has been missing since 1934. Although it has been replaced with a copy, local conspiracy theories still circulate about where the original might be.

Restorers, whose work behind glass panelscan be viewed by museum visitors, initially did not have permission to remove all the varnish and overpainting that had been done to the sizable work. 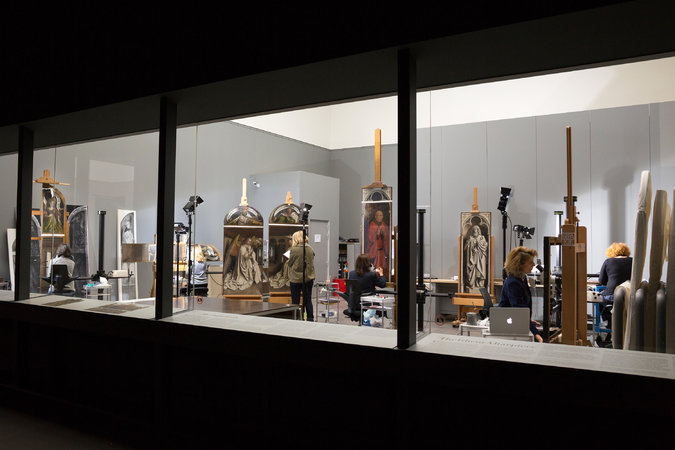 At the Museum of Fine Arts in Ghent, visitors were able to watch as restorers worked on individual panels.

But they were given the green light to carry out this perilous task after new scanning technology confirmed their hunches that what lay below was far more stunning and was “with more certainty than ever” painted by the Van Eycks and finished in 1432.

The scanning technique, called macro-X-ray fluorescence analysis, or MA-XRF, was revolutionary. “Never before has such a large surface been scanned; the outside panels measure eight square meters in total,” said Geert Van der Snickt, a cultural heritage scientist at the University of Antwerp who helped develop the technique.

This scanning technique is rapidly becoming the new golden standard for investigating historical paintings, he said. Since 2010, his team has scanned several smaller paintings, including Vincent van Gogh’s “Sunflowers”; Rembrandt’s “Syndics of the Drapers’ Guild”; Edvard Munch’s “The Scream” and a dozen other oil paintings by the Flemish Primitives.

The scans laid bare efforts to conserve the altarpiece, and the handiwork of its original masters.

“But what’s most revolutionary here is that the scans influenced the actual restoration works and convinced restorers to scrape off paint from one of the world’s most valuable paintings,” he added.

The scanner then captures these secondary waves, and through an analysis of their energy, momentum and angle, identifies each different atom and its place in a painting.

This allows scientists to construct images of a painting using one chemical element at a time, such as lead, copper, iron and mercury. By comparing these images, they are able to separate copper-based red pigments in a superficial paint layer, for example, from lead-based white pigments in an underlying layer.

These scans are part of an elaborate restoration campaign, which set out in 2012 to document and restore all 24 paintings of the Ghent Altarpiece by 2020. The Church Council of the St. Bavo Cathedral, which owns the painting, assigned a team of restorers from the Belgian Royal Institute for Cultural Heritage to carry out a limited restoration, and an international committee of experts to oversee their work.

The Flemish government allocated a budget of 1.26 million euros, or about $1.3 million.

But when the scans, which have only been conducted on the exterior panels, showed that about 70 percent of those panels were overpainted, restorers dug deeper.

Next, cross-sectional microfragments — smaller than a grain of salt — were taken from the exterior panels and put under a digital 3D microscope, provided by the University of Ghent. By magnifying the microfragments 200 times, restorers observed the paint’s surface in 3D, and saw how the layers were structured — where the overpainting dating mostly to the 16th or 17th centuries ended, and where the original painting began.

Three levels were detected: The original painting with the original varnishes on top; a first overpainting consisting of a thin colored, translucent layer with several layers of varnish on top; and the second overpainting, whose varnishes had already been removed.

Hélène Dubois, the project leader, said that the scans helped steer restorers from their early mission of simply restoring the overpainting to pursuing the original work.

And so in early 2015 restorers began laying tiny compresses soaked in solvents on the overpaint. Looking through a microscope, they then removed the softened paint with a cotton swab, or sometimes with a scalpel.

“A truly painstaking task,” said Bart Devolder, a restorer who uncovered the original figure of Archangel Gabriel on one of the panels.

Uncovered for the first time in about 500 years, the originals were in need of conservation. Each flake of ancient paint was treated with a tiny drop of isinglass, a natural collagen obtained from the swim bladder of a sturgeon, which was applied, heated and pressed down to match the surface.

Small losses in the original paint were carefully filled with a mixture of chalk and animal glue, and then retouched to integrate into the original painting. Finally, several layers of varnish were applied with a brush, and a final coat with a spray.

The result was “without a trace of hyperbole, a triumph: awe inspiring and transformative,” said Michael Gallagher, a member of the international committee of experts and chief conservator at The Metropolitan Museum of Art in New York.

The project also provided an opportunity for experts on the dating of wood, or dendrochronologists, to examine the panels of the altarpiece.

It was painted on 12 oak panels, a common form of support for paintings in the 15th century, until canvas became more popular near the end of the 16th century.

In 2008, Pascale Fraiture, a dendrochronologist at the Belgian Royal Institute for Cultural Heritage, examined the four central panels of the altarpiece — “The Virgin Enthroned,’’ “Deity Enthroned,” “John the Baptist Enthroned” and “The Adoration of the Lamb” — and a few years later, two of its wing panels, Adam and Eve.

“What we do is, we first identify the annual growth rings on a given piece of wood,” Ms. Fraiture said. “This gives us a pattern, or a code if you will, which I then compare with my database” — which covers more than 2,000 years of oak from Western Europe.

Ms. Fraiture determined that the planks used in the panels of the Ghent Altarpiece — each panel contains between two to four planks — all came from oak trees in the Baltic region.

“Back then, import of oak from the Baltic region was common, and was used for building ships, furniture and for paintings.”

“Several pairs of two or three planks, distributed over the different panels of the altarpiece, come from the exact same tree,” she said. The felling of the trees occurred between 1368 and 1408, she estimated.

The eight exterior panels have been returned to St. Bavo Cathedral, where the altarpiece had been on near-continuous display since its installment in 1432.

It remains to be seen whether the Flemish government, the main creditor, and the Cathedral Church Council, the owner of the artwork, will agree to a similar aggressive restoration for the remaining panels. Additional funds would be needed, and the deadline for 2020 would not be met, all sides agree.

St. Bavo wants the panels back by 2020, when a new museum is scheduled to open.

Well aware of the local politics surrounding the restoration, Mr. Gallagher said: “The next steps are crucial. It is absolutely vital that the same focus and care are brought to the interior wings.”

“I and my colleagues fully acknowledge the complexities of different expectations and competing timetables,” he said, adding that nevertheless they were “confident that the No. 1 priority will remain the welfare and significance of Van Eyck’s legacy.”

Back at the museum in Ghent, restorers started investigating the interior panels earlier this month. During a recent tour of the museum, Ms. Dubois halted before the central panel — “The Adoration of the Mystic Lamb” — and locked it with her eyes. (She decided to become a painting conservator when she first saw the Ghent Altarpiece at the age of 16.)

“The white lamb in the middle, you see” she said, unable to suppress a smile, “I can assure you, is overpainted.”

A picture caption on Tuesday with an article about the restoration of the 15th-century Ghent Altarpiece misidentified the photographer of the restored exterior panels, depicting the Annunciation. He is Dominique Provost, not Hugo Maertens.