His works on canvas, influenced by cave paintings and African tribal art, often consisted of stick figures, crudely rendered animals, pictograms and calligraphic squiggles. His crowded scenes suggested conflict, or deep psychic distress, annotated in a forgotten hieroglyphic language or a proto-computer code, and set in a time that seemed at once mythic and contemporary. The latent violence of the Cold War, and the historic rupture dividing East and West Germany, infused his work with palpable angst.

In the three-dimensional Standarts, he affixed bottles or tin cans to cardboard boxes, in a manner reminiscent of Arte Povera, the Italian movement that venerated commonplace, preindustrial materials.

“His pictures are at once simple and complex; they suggest all kinds of systems but ones not fully understood by modern man,” the critic Mark Stevens wrote in Newsweek in 1983. “This combination of the sophisticated and primitive, of billboards and magic, appeals to many who find his work rich in references to totalitarianism and the conflict between East and West.” 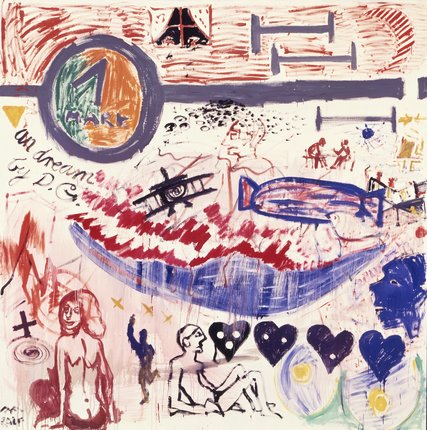 Mr. Penck’s troubles with the East German government increased in direct proportion to his acceptance in the West as an important new artist. His inclusion in the prestigious Documenta exhibition in Kassel, West Germany, in 1972 turned the spotlight on him, and a year later, when the Communist government discovered that he had been exhibiting in the West under a false name, he was drafted into the army for six months.

After the West Berlin Academy of the Arts awarded Mr. Penck the Will Grohmann Prize in 1975, and the Kunsthalle in Bern, Switzerland, mounted a retrospective of his work, his situation grew untenable at home. In 1980 he was expelled from East Germany.

He was born on Oct. 5, 1939, in Dresden, and as a young boy witnessed the catastrophic Allied firebombing of February 1945. His mother, a schoolteacher, was divorced from his father when Ralf was 10.

His artistic training was perfunctory. In his early teens he took painting and drawing lessons with Jürgen Böttcher, known by the pseudonym Strawalde, and joined with him to form the renegade artists’ group First Phalanx Nedserd (“Dresden” spelled backward). He later worked for a year as a trainee draftsman at the state advertising agency in Dresden.

His early work tended toward fairly standard landscapes, cityscapes and portraits, some of which were exhibited, but it also included the arresting “Execution,” a pencil drawing of three men about to be shot by a three-man firing squad. Its violent subject matter anticipated his painting “Electric Chair” (1959-60), which depicts a barefoot man strapped into the seat, watched intently by a seated audience.

After failing to gain admission to the fine-arts academies in Dresden and East Berlin, Mr. Penck worked for several years as a stoker, a newspaper deliverer, a margarine packer and a night watchman.

His emblematic stick figure evolved in the early 1960s: a spindly Everyman, often presented solo in midair, as though frozen in the act of doing jumping jacks, though sometimes assembled into groups. In “World Picture” (1961), Mr. Penck pitted two camps of stick figures, each side brandishing weaponlike forms and holding aloft placards bearing the equation “A = A.”

In 1968 Michael Werner, then with the Galerie Hake in Cologne, arranged a show of Mr. Penck’s work, which had to be smuggled in from East Berlin, where Mr. Penck had moved in 1963. It was then that he adopted what he called his “paint name,” one of several. He later used Mike Hammer, T.M. and Y.

After opening his own gallery in 1969, Mr. Werner heavily promoted the work of Mr. Penck and another of his discoveries, Georg Baselitz. The West German art press soon gave a name — the Neue Wilde (“Young Savages”) — to a scattered group of Neo-Expressionists that included, in addition to Mr. Penck and Mr. Baselitz, the painters Jörg Immendorff, Markus Lüpertz, Anselm Kiefer and Sigmar Polke. Reviewing two exhibitions by Mr. Penck in The New York Times in 2013, Roberta Smith called him “in many ways the most visionary and accessible of this cohort.”

With the “Zeitgeist” exhibition at Martin-Gropius-Bau in 1982 and the “New Art” exhibition at the Tate Gallery in London a year later, Mr. Penck and the rest of the pack began to look like a conquering army, as Neo-Expressionism assumed the dimensions of a major movement.

After leaving East Germany, Mr. Penck settled in Kerpen, southwest of Cologne, but in 1983 he moved to London. He later relocated to Dublin. A keen drummer, he joined with the bass player Frank Wollny in the 1980s to form the free jazz group Triple Trip Touch, also known as TTT.

When interest in Neo-Expressionism faded, Mr. Penck slipped off the radar screen. But he continued to develop the stick-figure motif, crowding his brightly colored canvases with tightly interlocked forms, and in the late 1980s and early ’90s he executed a stunning series of self-portrait heads resembling fierce tribal masks. In the late ’70s, he began making wood sculptures, using chain saw and ax to create monumental totemistic columns. He later turned out sculptures in iron and bronze.

Mr. Penck is survived by his wife and children. Complete information on survivors was not available.

A survey of his work, “Rites of Passage,” is currently on view at the Fondation Maeght in St.-Paul-de-Vence, France.