Home Lifestyle Art Ahead of the Tonys, Watching Everything 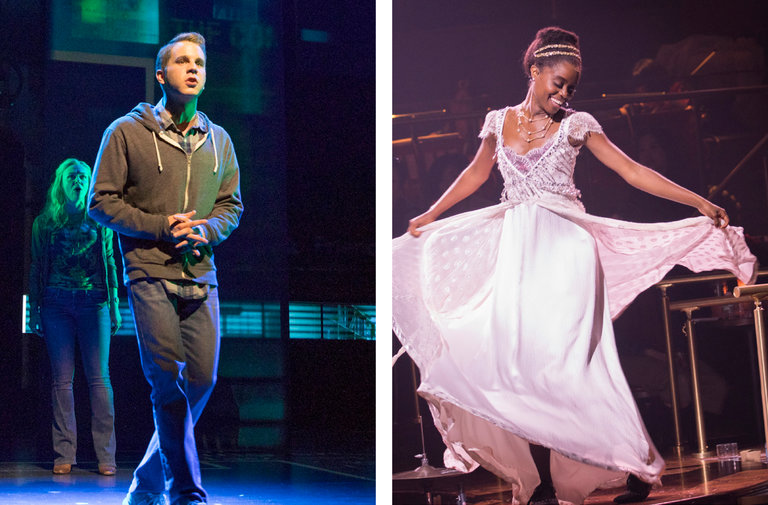 The Broadway actors Ben Platt, who plays the title role in “Dear Evan Hansen” (left), and Denée Benton as Natasha in “Natasha, Pierre & The Great Comet of 1812.”

Sunday, June 11 is the biggest night of the year for Broadway: the Tony Awards, when the industry honors the best work of the season. Just as important to Broadway producers: the millions watching on television who are potential ticket buyers.

For those of us on the theater desk — The New York Times has six theater staffers, including an editor, two critics, a photographer, a digital specialist, and a reporter (that’s me), as well as several invaluable freelancers — the Tony season began weeks ago, early on the morning of May 2, when this year’s nominations were announced.

The 40 days between the nominations and the awards are intense. Tony voters — 839 people who are connected to Broadway financially, as producers and investors, and artistically, as performers, directors and designers — scramble to see all the shows before the June 9 voting deadline.

Producers campaign for support, urging voters who haven’t yet seen their shows to attend, asking those who came months ago to revisit, and sending out scripts, songs, photos and reviews. Nominees attend, and sometimes perform, at parties and benefits, seeking to create good will.

As the theater reporter, I’m expected to be knowledgeable about the nominated shows, which means I see every play and musical that runs in the 41 Broadway theaters.

Seeing all those shows — there were 37 eligible for Tonys this past season — is a privilege, obviously, and often a pleasure, but also an obligation I take seriously. And Broadway shows are just a small fraction of my theatergoing, as I report on theater news, trends, personalities and issues. (I don’t write reviews — in the Times culture department, critics and reporters have distinct, although sometimes overlapping, roles.)

This season, I have seen most of the best new musical nominees several times. I’ve paid 4.1 visits to “Natasha, Pierre & the Great Comet of 1812,” starting five years ago at the 87-seat Ars Nova theater Off Broadway, and including a fractional visit one afternoon when I swung by to see a scene I was trying to describe in a story about Josh Groban. I’ve been to “Dear Evan Hansen” four times, beginning with its 2015 premiere at Washington’s Arena Stage. And I’ve seen “Come From Away” six times, if you include both concert performances at a Newfoundland hockey arena one day last fall and the winter night I spent in the Schoenfeld Theater’s basement, banging out a story about Justin Trudeau’s presence in the audience upstairs. (One of our Canada reporters, Dan Levin, was seated in the orchestra section, eyes trained on the prime minister.)

I have seen the fourth nominee for best new musical, “Groundhog Day,” just once, but that was the most memorable — it was the high-stakes opening night, which was the first time the show’s star, Andy Karl, had performed after tearing his A.C.L. Following his gutsy show-must-go-on return, he let me and our much-admired theater photographer, Sara Krulwich, join him in his dressing room for an emotional interview as he changed for the opening night party.

The theater desk is working hard to take advantage of all the ways Times readers now consume information. We covered this year’s nominations with a live briefing, analysis from our critics Ben Brantley and Jesse Green, and reactions from nominees. The next day, we talked with many of the Tony nominees on Facebook Live. Our multimedia coverage continued with our annual Tony Awards concert, hosted by our digital specialist Erik Piepenburg, which this year featured an all-female lineup of performers. And on May 14, we printed the annual Tonys issue of Arts & Leisure, overseen by our expert editor, Scott Heller, and filled with profiles and commentary about the season and its shows.

Most of don’t go to the awards ceremony, which begins at 8 p.m. Eastern time. Our deadlines are so tight, for the web as well as for print, that we need to be in the office, writing and editing. But we do get a taste of the excitement — about 11 hours before the awards, we attend a rehearsal at which the host (this year: Kevin Spacey) and the casts of nominated shows practice their numbers. (There are also fake acceptance speeches that are sometimes amusing parodies of the form.) And we do send a reporter, as well as Ms. Krulwich, to the ceremony, so they are present to witness anything not shown on CBS.

We have lots in store for you this weekend. Please join us online at nytimes.com/tonys and in print Monday morning. And you can always find our coverage at nytimes.com/theater; after the Tonys we’ll turn to bringing you news, reviews, and enterprise from other corners of the theater world.