Those high-low distinctions did not seem to bother the attendees of the jobs fair, many of them united in the conviction that Amazon represented untapped opportunity — that a foot in the door could lead to a career of better-compensated, more satisfying work, whether in fulfillment, I.T., marketing or even fashion.

Mr. Williams, a military veteran studying computer network security at a nearby community college, said he hoped to eventually work his way up to an I.T. job with Amazon. But even those whose ambitions were more in line with the vast majority of available jobs could not hide their excitement.

Victor Salgado, who makes $9 per hour with no benefits doing maintenance at an aerosol company and spent three years before that grouting floors, said he was attracted by the promise of an upgrade in pay and benefits. He said he would be willing to “do anything” at Amazon. 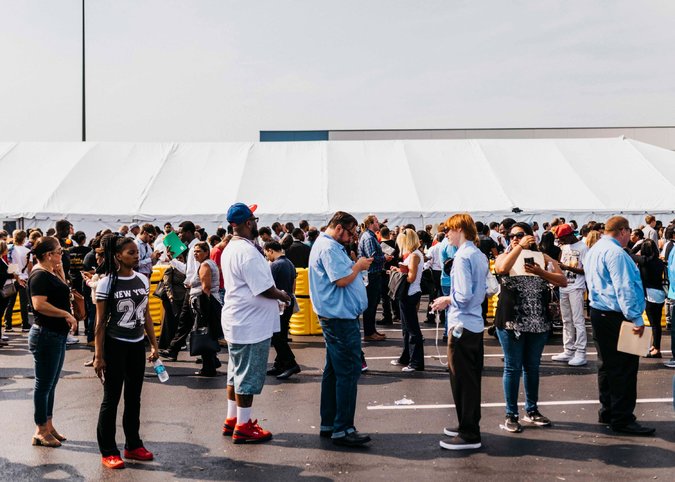 The vast majority of Amazon’s hiring is for what the company calls its “fulfillment network.”

“A record-breaking 20,000 applications were received on this day alone,” said John Olsen, an Amazon human resources vice president, “with thousands of job offers extended to candidates and more to come in the next few days.”

Filling so many jobs is challenging, which partly explains the jamboree at Amazon’s warehouses on Wednesday. The company’s warehouse jobs, which typically pay $12 to $15 an hour, have a reputation as physically demanding and repetitive, with high rates of burnout. Amazon has successfully resisted union organizing that might introduce more worker protections.

Jack Chasteen, who recently finished high school and is still living at home, said he had been planning to seek a job as a pizza deliveryman but that his parents urged him to turn up at Jobs Day instead.

“They said it would be a good building block for stuff in the future,” he said, citing Amazon’s tuition assistance program, which he hoped might help him pursue a nursing degree.

It is indisputable that the growth of e-commerce, which Amazon captures a big chunk of, has devastated many physical retailers, leading to store closures and layoffs. There is debate, though, about how much the corresponding expansion of jobs related to e-commerce has offset the decline in employment at physical stores.

Amazon’s remarkable head count growth stands in sharp contrast to its image as a job killer. It was the fastest American company in history to employ 300,000 people globally, crossing that threshold last year, its 20th as a public company, according to a paper published this year by the Progressive Policy Institute, a left-leaning think tank. Walmart reached that milestone 21 years after it went public, the paper said.

The figures do not include the thousands of seasonal workers that join the company to help it with the crush of holiday shopping. Some come in R.V.s as part of a group Amazon called CamperForce. The company pays for their campsites.

Amazon hired 30,000 new employees in its last quarter alone. Facebook, in contrast, employed just under 21,000 people at the end of June, while Alphabet, the parent company of Google, employed about 76,000.

“Their business has always been a meld of the digital and physical,” he said. “Retail is very different from digital products or music or social networking. The other tech platforms are, at their core, selling tech products.”

But there are questions about how long Amazon’s fulfillment jobs will exist, as robots and other forms of automation become more capable at doing the jobs that now require humans.

Amazon is more aggressively using robots to help make the operations inside its warehouses more efficient. For now, the company said machines are not replacing people. Instead, they mostly move large shelves of merchandise to stations where orders are manually picked.

Many academic researchers and start-ups are working on robots that have the dexterity to pick orders automatically. Amazon sponsors a competition to encourage engineers to build more advanced warehouse robots.

When those technologies are perfected, the employment picture inside Amazon’s warehouses could look very different. That day could be a decade or more away, though.

“While the digital disruption is destroying the traditional retail business model,” Dr. Sundararajan said, “the Amazon model that replaces it will continue to live in the physical world and require human labor for the foreseeable future.”

As for Mr. Williams, he later sent a text message to say that he was not hired on the spot on Wednesday, a possibility that Amazon had dangled before workers. On the plus side: he was told there was still a chance to get a job at the center through a temporary staffing company.

An earlier version of this article misstated the hourly pay Victor Salgado makes at an aerosol company. It is $9.00 per hour, not $10.75.