And it was rumored that she had an affair with Mick Jagger, the group’s lead singer, when she appeared with him in the 1970 film “Performance.” She always denied that and attributed the intensity of their onscreen chemistry to “method acting.”

Her relationship with Mr. Richards began, the story was often told, when he rescued her from being beaten by Mr. Jones one day in Morocco in 1967. Mr. Jones drowned in a swimming pool two years later.

“The one woman in the world you did not want to try and beat up on was Anita Pallenberg,” Mr. Richards wrote in “Life,” his memoir published in 2010. “Every time they had a fight, Brian would come out bandaged and bruised.”

In addition to her strength, Mr. Richards professed to love Ms. Pallenberg for her creative taste and enthusiasm. “Anita came out of an artistic world, and she had quite a bit of talent herself,” he wrote. “She was certainly a lover of art and pally with its contemporary practitioners and wrapped up in the Pop Art world.”

In her late teens, even before she met the Stones, Ms. Pallenberg had ventured to New York and connected with artists, among them Robert Rauschenberg, and writers, including the poet Frank O’Hara and the playwright LeRoi Jones. She eventually gravitated to Andy Warhol and his Factory entourage of eccentric artists and performers.

“I’ve always been a hanger-on,” she cheerfully admitted in “Old Gods Almost Dead,” Stephen Davis’s 2001 chronicle of the Stones’ lives and careers. “Whenever I liked something, I really got into it. How better to get into it than to be with them, you know?”

Anita Pallenberg was born in Rome on Jan. 25, 1944, while Italy was under Nazi occupation. Her parents were German: Arnaldo Pallenberg was a sales agent and hobbyist painter; the former Paula Wiederhold worked as a secretary. Anita, who said that she grew up poor because her grandfather had given most of his estate to the Nazis, attended schools in Italy and Germany. An unenthusiastic student, she had a habit of cutting class and was eventually expelled. 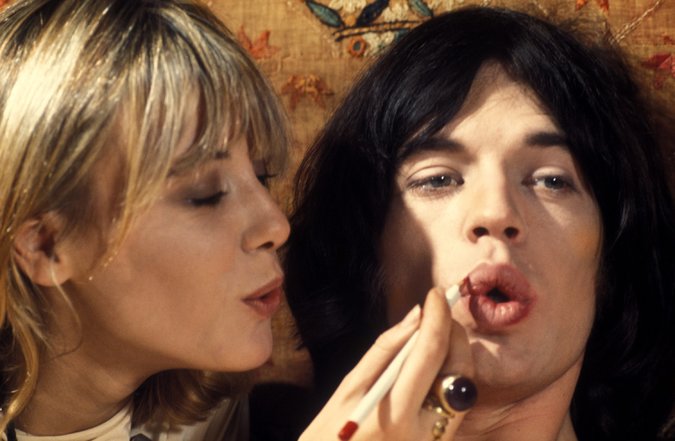 At 21, she was already busy as a fashion model when, in 1965, she attended her first Rolling Stones concert, with a friend, in Munich. She managed to go backstage afterward, offered Mr. Jones some marijuana and some hashish and went back to his hotel room.

The two quickly became a couple, and Ms. Pallenberg, photographed in miniskirts or hip-hugger pants and her signature wide-brimmed hats, became a familiar figure on the group’s worldwide tours. Her look was the epitome of the ’60s mod aesthetic — straight blond hair with bangs, dark-lined eyes and pale lips.

Her acting career began with the young German director Volker Schlöndorff. She starred in his second full-length feature, “Degree of Murder” (1967), as a young woman who accidentally kills her boyfriend and is trying to hide the body. (Mr. Jones, with Jimmy Page of the rock group Led Zeppelin, wrote the film’s theme.)

It was during the making of “Performance,” she said later, that she began using heroin. In 1977, Mr. Richards was arrested and charged with heroin possession in Toronto, and as a couple the two entered rehab.

In 1979, a 17-year-old Connecticut boy was found dead, of a self-inflicted gunshot wound, in the house Ms. Pallenberg shared with Mr. Richards in South Salem, N.Y., a wealthy Westchester County suburb. The death was ruled a suicide, but it was rumored that the young man and Ms. Pallenberg had been playing Russian roulette. She was charged with criminal weapons possession.

After a two-decade absence from the screen, she returned in 1998 with “Love Is the Devil,” a biography of Francis Bacon. Even in her 60s, she chose oddball films — or they chose her — including Harmony Korine’s “Mister Lonely” (2007), about a group of celebrity impersonators. Ms. Pallenberg played the Queen Elizabeth II impersonator, in a gray wig but with her own distinctive Western European accent.

She made a memorable appearance in 2001 on the hit British comedy series “Absolutely Fabulous,” playing the Devil in a fantasy sequence, alongside Marianne Faithfull, her old friend and fellow rock muse, who played God. Ms. Pallenberg’s last film was Abel Ferrara’s “4:44 Last Day on Earth” (2011).

In between, she earned a four-year degree in fashion and textiles from Central Saint Martins, the prestigious London art school. A writer for The Guardian later described that accomplishment as a “triumph of style over substance abuse.”

She considered a fashion career but soon decided that the industry was too venal. In her later years, she took classes in watercolor and botanical drawing.

With Mr. Richards she had two sons, Marlon and Tara, and a daughter, Angela Richards (whose original given name was Dandelion). Tara died in infancy. She had five grandchildren.

Ms. Pallenberg compared her years of heroin addiction to being in a cocoon.

“In a way, it’s kept me probably more childlike,” she said in an interview with The Guardian in 2008. “That’s what drugs do to people. They stop emotional growth. So when you come out of it, you’re kind of 17.”