“Instagram has become the leading social media tool for discovering, showing and following art, particularly for people below the age of 35,” said Anders Petterson, an author of the Hiscox Online Art Trade Report. Of the more than 650 art buyers questioned for the 2016 report, 48 percent said that Instagram was their preferred social media platform. The figure rose to 65 percent among the younger buyers contacted. “It has hit a sweet spot in the market for sharing information,” Mr. Petterson said, “but no one saw this coming as a sales tool.”

Its direct effect on art sales, however, remains difficult to quantify, apart from anecdotal evidence. Last month, a Jean-Michel Basquiat canvas priced at about $24 million was hailed by Bloomberg News as a breakthrough Instagram sale.

Brett Gorvy, then Christie’s global head of contemporary art, had posted an image of the Basquiat, a 1982 painting of the boxer Sugar Ray Robinson, on his personal Instagram site (57,900 followers) as he boarded a plane for the auction house’s private selling exhibition in Hong Kong. When he landed, Mr. Gorvy said he had messages from three collectors — in the United States, London and Asia — expressing interest in buying the painting. The unidentified American collector completed the transaction two days later. 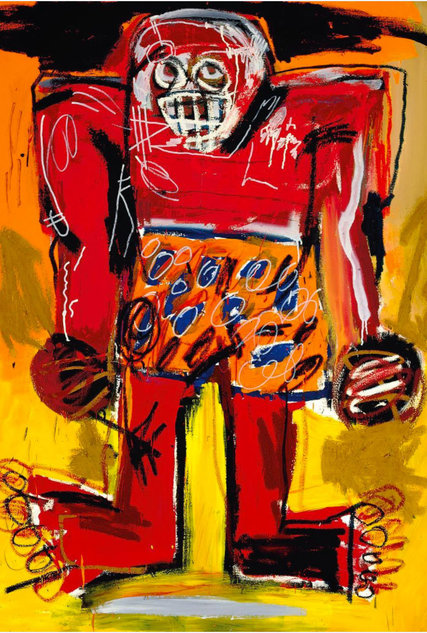 Christie’s declined to comment on the Basquiat, though it would technically regard it as a private sale, rather than an online transaction. But Mr. Gorvy, who is now a partner in the newly branded Lévy Gorvy dealership, said, “From the buyer’s point of view, this was a total Instagram sale.”

Mr. Gorvy’s Instagram account is all the more influential for having no corporate branding and a strong individuality.

“It allows you to get into the hearts and minds of important collectors,” Mr. Gorvy said. “People think they know you, and that pulls down barriers. People saw that I had a daughter, a dog and a home. I became less of a guy that sells paintings.”

Just as difficult to gauge is the impact of the huge Instagram followings on sales at the world’s major galleries. Gagosian Gallery’s Instagram site has at least 593,000 followers, with that of Pace not far behind, at 506,000.

“It’s a two-way thing,” said Stefan Ratibor, the director of Gagosian’s London galleries. “We put out the information and we value the feedback. This has led to conversations that have led to sales, but they can’t be quantified.”

Mr. Ratibor said that Gagosian regarded Instagram as “hugely important,” to the extent that the eight-part series of Rudolf Stingel exhibitions held last year at the dealership’s Park Avenue gallery in New York was announced on Instagram, rather than through the traditional medium of cards and advertisements.

“Instagram made it more special,” Mr. Ratibor said. “People think they are in on a secret. That’s the magic of the medium.”

The contemporary dealers Joe Kennedy, 27, and Jonny Burt, 26, are now holding an exhibition of “art popularized by Instagram” at Unit London (78,800 followers) in the city’s Soho district. A collaboration with the Instagram-savvy dealership Avant Arte (490,000 followers) of the Netherlands, the show, which opened on Jan. 13, features 31 works at the more accessible end of the market, for emerging art. Information about the works is available not through labels, but through smartphone quick response, or QR, codes on the gallery walls. As of last Wednesday, 27 had attracted confirmed sales at £1,500 to £25,000 each.

“Young people of our age are growing up on social media. They’re glued to their phones,” Mr. Burt said. “Instagram creates a safe place to enjoy art. They feel part of the gallery before they walk in.”

Although half of the show was reserved via Instagram before it opened, sales at Unit London continue to be confirmed in person, in the way that gallerists have been closing sales for hundreds of years.

But there is one, perhaps slightly unlikely, area of the market in which Instagram has proved a true sales platform: affordable collectibles.

Mikki Towler, a dealer in antique kitchen items in Norfolk, England, has been active on Instagram for 12 months, drawing 2,427 followers and averaging two sales a day.

“I put a piece on Instagram and it’s sold before I get to put it on my website,” said Ms. Towler, a trader for 26 years. “Some people don’t even ask the price, they just say, ‘I’ll have it.’” Ms. Towler added that the Instagram-friendliness of her business was helped by having few pieces priced at more than £200.

To keep things in perspective, though, Kylie Jenner, 19, the reality star turned cosmetics magnate, announced on her personal Instagram account last Wednesday that her sold-out $45 range of Royal Peach Palette eye makeup would be restocking on KylieCosmetics.com. After 14 hours, the post had attracted 781,373 likes.

An earlier version of this article misstated the number of parts in a Rudolf Stingel exhibition at the Gagosian Gallery. There were eight parts, not seven.