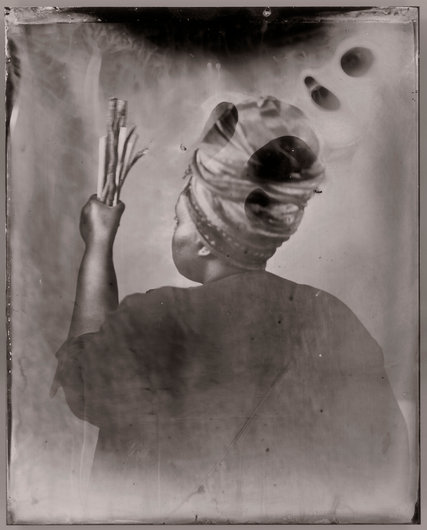 “Sothiou,” a silk-screen print of a photograph by Khadija Saye, 24, who died in the Grenfell Tower fire, was displayed on Tuesday at the Tate Britain.

Credit
Khadija Saye, Courtesy of Jealous Gallery and The Studio of Nicola Green

LONDON — An artwork by Khadija Saye, a 24-year-old British artist who died in the Grenfell Tower fire here last Wednesday, will be hanging in the memorial space of Tate Britain. “Sothiou” (2017) is a silk-screen print of one of Ms. Saye’s photographs in the series “Dwellings: in this space we breathe,” currently showing in the Diaspora Pavilion of the Venice Biennale.

Andrew Wilson, a Tate senior curator in modern and contemporary British art, said in an email that the display, which began on Tuesday in the small memorial gallery, “celebrates the leap that Khadija made with this work and might also stand in some way as a means to remember her and her neighbors in the community in Grenfell Tower who were tragically killed.”

Ms. Saye, who was born and grew up in Britain, was a photographic artist whose subject was often her Gambian heritage. “Her work was all portrait based, and most of it is highly personal, which is pretty brave for someone of that age,” said David A. Bailey, the co-curator of the Diaspora Pavilion, which is showing pieces by 12 British-based emerging artists, as well as their mentors, through Nov. 26.

The Diaspora program was founded two years ago by Mr. Bailey and the portrait artist Nicola Green to help racially and culturally diverse emerging artists and curators. Ms. Green, who met Ms. Saye three years ago while on a selection committee for an exhibition, said she was immediately drawn to her photographs and to the artist.

“Her self-portraits explore spiritual Gambian practices and a deep urge to find solace in a higher power,” Ms. Green said, adding that Ms. Saye was the youngest artist in the exhibition. “It’s extremely powerful work; her strength of spirit is palpable.”

But Ms. Saye was still virtually unknown, Mr. Bailey said. Now, he added, “everyone is talking about her around the world.”