Home Lifestyle Art Art Review: A Case for the Greatness of Florine Stettheimer

Born into a wealthy German-Jewish family in 1871, Stettheimer grew up in New York and Europe with her mother, Rosetta, and her two also unmarried sisters, Ettie and Carrie. She worked mostly in Paris and Munich and saw art all over. Forced back to New York by World War I, the Stettheimers shortly began to entertain avant-gardists from both sides of the Atlantic in their uptown apartment, and Florine’s Midtown studio. Overlooking Bryant Park, this white-on-white aerie was hung with cellophane drapes, an inspired touch that went public in Stettheimer’s stage designs for “Four Saints in Three Acts,” an opera with music by Virgil Thomson, a libretto by Gertrude Stein and featuring an all-black cast that played briefly on Broadway in 1934. It may have been the most ostentatious expression of the New York avant-garde until the sensation of “Einstein on the Beach” at the Metropolitan Opera in 1976. 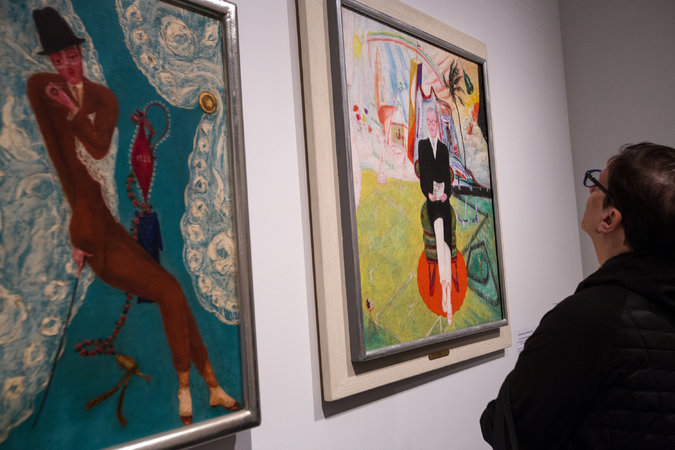 The first Stettheimer cult was the one she painted. After a disappointing — and premature — solo show at Knoedler in 1916, she exhibited most frequently at her private salons. The women in her scenes were almost always her mother and sisters. The men were for the most part movers and shakers of the small New York art world, dandies, if not gay, who frequented the salon and admired Stettheimer.

She had a wonderful gift for body language. In her 1922 portrait of the dapper art critic Henry McBride, he is shown refereeing a tennis match. His bespectacled face beams amused attention and intelligence, and he wears a black jacket and white trousers. His knees aren’t quite right, but the white-slippered feet, resting on a small scarlet circle of a rug and pressed together, are perfect, chaste and sexy.

“Picnic at Bedford Hills,” from 1918 and arguably Stettheimer’s first masterpiece, depicts a small fete on a hillock of bright yellow. Marcel Duchamp in lavender mans a lobster pot, with the three sisters, their names written on their parasols, arrayed around him. Most resplendent is Ettie in red and purple stretched out on a black blanket, listening to the Polish American sculptor Elie Nadelman, in dark yellow. The pale pink background of workers in wheat fields seems like a tribute to van Gogh.

Stettheimer’s paintings also give us more populated views, like the antic “Spring Sale at Bendel’s” or “Lake Placid,” in which swimmers and boaters enjoy hilly swells of celadon waves that fuse with the mountains, and “Asbury Park South” (1920). It features the denizens of a segregated beach, with a handful of white visitors, including Florine and Marcel, all equally turned out.

Stettheimer’s New York shows have been pertinent in either theory or practice. The first was at the Museum of Modern Art in 1946, two years after Stettheimer’s death, partly organized by Duchamp, whose love of her work certainly complicates his well-known rejection of “retinal” art, i.e. painting. In 1973, a smaller show at Columbia University, a key repository, with Yale University, for all things Stettheimer, coincided with the second wave feminism and was accompanied by an essay, “Florine Stettheimer: Rococo Subversive,” by the redoubtable art historian (and feminist) Linda Nochlin. In 1995, the Whitney Museum brought forth “Florine Stettheimer: Manhattan Fantasia,” still the largest Stettheimer show yet.

The current foray has been organized by Stephen Brown, an associate curator at the Jewish Museum, and Georgiana Uhlyarik, a curator at the Art Gallery of Ontario in Toronto, where it will open in October. It lacks several key works and crowds most paintings into two small salon-style rooms, but it includes rarely seen material pertaining to “Four Saints,” including photos and tiny wire sculptures that were Stettheimer’s set and costume designs. The show conveys the strength of Stettheimer’s work, at a moment when color and figuration are popular among younger painters, a great many of them women; when a lot of art is moving forward by reconsidering the past; and when gender, which Stettheimer modulated endlessly, is increasingly seen as fluid.

Also timely is the clarity the show brings about Stettheimer’s transformative experience of the body in motion, inspired by the sight in Paris in 1912, of Nijinsky in “The Afternoon of a Fawn,” a production by Sergei Diaghilev’s Ballets Russes with sets by Leon Bakst. A tribute to this moment might be Stettheimer’s painting “Music,” from around 1920. Its completely white field centers on a dancer in head-to-toe magenta who is thought to be a female Nijinsky. At the right, a musician bends over a purple grand piano, behind which hangs a patchwork of green and purple on red, a textile such as Bakst might have designed, or Diaghilev might even have worn as a cape.

The show begins with portraits of her family rendered in a watered-down, slightly academic Post Impressionism. (My first thought: Bonnard is going to do this so much better.) Then, in the second gallery, you see the shock of the Ballets Russes rippling through the display of drawings, collages and three small figurative sculptures from 1912. They are Stettheimer’s costume designs for her ballet “Orphée of the Quat-z-arts,” which she had hoped Nijinsky would dance. Suddenly, Stettheimer’s sensibility is fully visible in the lithe figures, the playful movement, the rich raiments, the intense colors — especially in the “Wave,” a turquoise sculpture of a dancer in the middle of a broad, indisputably modern-dance turn. “Orphée” remained unrealized, which may have been painting’s luck. As the heart of the show reveals, it took Stettheimer six years to wrestle her new vision onto canvas, but when she did the ravishing results forged a place in history that demands to be recognized.

An earlier version of this review referred incorrectly to the feminist movement in the 1970s that coincided with a 1973 exhibition of Florine Stettheimer’s work. It was the second wave — not the first, which is generally considered to have spanned the 1830s to the early 1900s.