During his 60-year career, Sottsass Jr. designed office systems (including the shell of the Olivetti mainframe computer, from 1957 to 1959) and systems for simplified living, as well, that were intended to discourage consumption. His Superbox, for example, designed in 1966, was an outhouse-proportioned wardrobe with a surface of plastic laminates of the buyer’s choice — had it been produced. It stands out from the wall like one of Anne Truitt’s painted Minimalist plinths. Complete with its own pedestal that ignored the Minimalist practice, while also complicating its use, it was intended to hold all your carefully winnowed belongings. His experimental Environment units similarly compressed the basic household functions (cooking, sleeping, bathing) into mobile modular cabinets that would link together for moving. At least in theory. They never got beyond the maquette stage and are present here only in a 1972 film that Sottsass made with Massimo Magrì, and two excellent drawings. 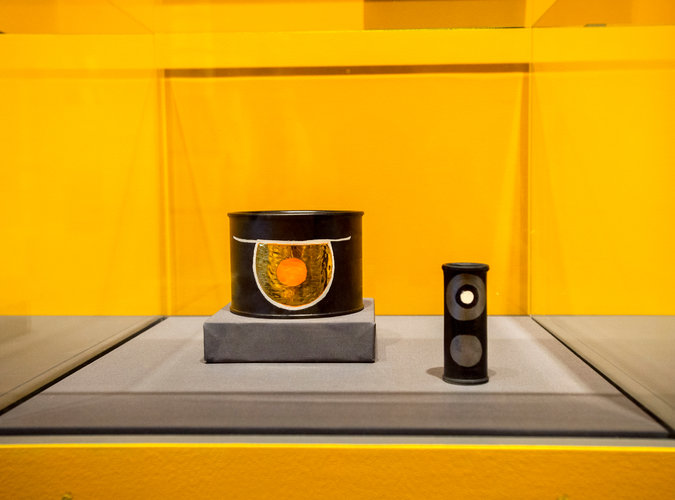 Tenebre (Darkness), a series of ceramic vases by Sottsass.

But he also had an obsession with handcrafted glass and especially ceramics, fed by his many trips to India. A grove of Sottsass’s looming ceramic totems, built from cylinders glazed in many colors, are in a gallery painted marigold yellow, alongside tiny Indian stupas with similarly stacked structures. The remaining Sottsass ceramics here mostly lose out to the antiquities, except for the more delicate, Deco-like black-and-silver vases of the Tenebre (Darkness) series from 1963.

Initially a devotee of modernism, Sottsass designed one of its postwar classics: the Olivetti manual typewriter of 1968, intoxicatingly bright and enshrined in the Museum of Modern Art by 1969. Its form-follows-function economy is articulated by its magnetic color, but it was eventually cursed by its creator for overshadowing his other achievements (in an expletive probably never before seen in a Met wall text).

But Memphis seems to have been in Sottsass’s blood. Even before the Olivetti typewriter, he was intimating a sundering of modernism’s form-function credo, as evidenced by two towerlike cabinets from the early- and mid-1960s in the show’s first, dense gallery. Enlarging the Viennese grid seen nearby in designs by Hoffmann and Kolomon Moser, they attest to an inborn preference for bright color, combined materials and bold, subtly humorous scale.

Sottsass’s apostasy culminated in the exuberant wildness of his Memphis furniture, with its angled forms, Fiestaware hues, enlarged faux-wood grains and startling modern laminates. The design group took its name from the cities in Tennessee and ancient Egypt and the Bob Dylan song “Stuck Inside of Mobile With the Memphis Blues Again,” which played repeatedly during its first meeting in 1981. Later that year, Memphis caused a furor at the annual Salone del Mobile, Milan’s revered Italian furniture fair, unapologetically infecting design with postmodernism’s skeptical mixing of styles, symbols and emotional content. Karl Lagerfeld bought many of the Memphis prototypes for his Monaco apartment and — well, the rest is history. (The pieces ultimately were priced too high for average consumers and became symbols of ’80s excess.) For better and for worse, Sottsass’s influence still ripples through contemporary design.

The Met’s insistence on mixing and matching, always pushing the relevance of its vast holdings to more contemporary developments, may become a tick. (It certainly diluted the recent show of Marsden Hartley’s Maine paintings.) Mr. Larsen’s add-ons here are usually effective and they point up a strength of this tactic: singling out historical works you might otherwise have missed in the flow of the collection galleries, like the terrific little painted-wood reliquary from New Kingdom Egypt that resembles a Romanesque chapel.

Some add-ons feel superfluous, including overexposed works by Roy Lichtenstein and Frank Stella. The Met’s exceptional 1964 canvas by the Abstract Expressionist Adolph Gottlieb serves mostly to make the show’s single Sottsass painting look bad. Some indication of Sottsass Sr.’s work, or his collaborations with his son, seem in order, as does the inclusion of relevant non-Memphis legends like Joe Colombo and Gaetano Pesce.

Mr. Larsen has some revelatory decoy maneuvers. A black-and-white cane armchair from 1903 by Hoffmann and Moser is accompanied by what initially appears to be a Werkstätte oddity but is actually a wood planter that Sottsass designed in 1961, more straightforward and less refined. One of the best juxtapositions is a vitrine that alternates three Sottsass glass objects with three kachina figures by unrecorded Hopi artists whose colorful geometric forms clearly relate. And the kachinas come racing back to mind in one of the high points in the show’s final gallery: the akimbo, symmetrical semaphore of Sottsass’s Carlton Room Divider, a standout from the 1981 Milan furniture fair. Here Sottsass, as in his other Memphis pieces, achieves a new friction between form and function, while slyly merging painting, sculpture and furniture with the spirit of architecture.

The not-always-pertinent non-Sottsass material means that this exhibition sometimes feels padded. Sottsass could easily have filled the space at the Met Breuer if there had been more lead time. Nonetheless, it provides an invaluable introduction to his complex, resonating achievement.