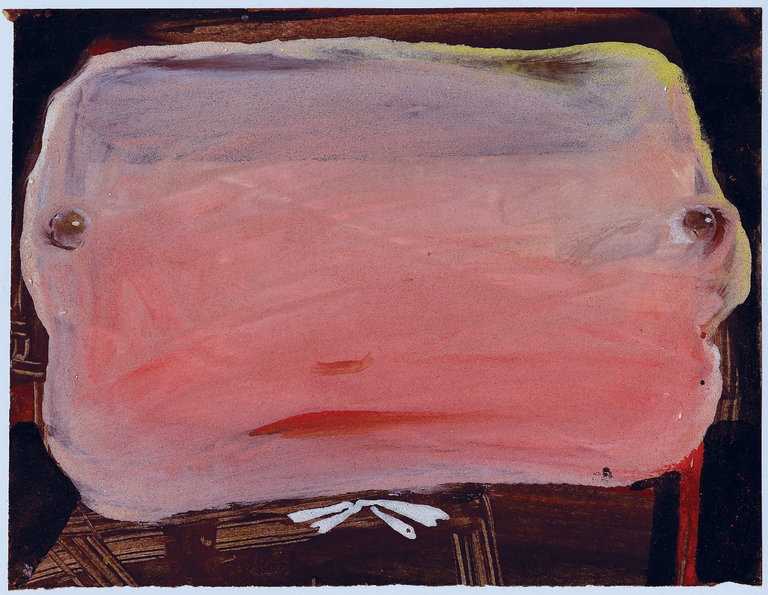 An untitled gouache by Eugen Gabritschevsky from 1947.

Eugen Gabritschevsky was supposed to be a scientist. Born in 1893 to an eminent Russian bacteriologist and privately educated with his four brothers and sisters, he painted and drew compulsively even as a child, but spent the Revolution earning a biology degree at Moscow University, did postdoctoral research in Paris, New York and Edinburgh, and published widely. Altogether he spent nearly 40 years learning to impose order, in the form of names, theories, and family trees, on the chaos of the natural world.

But an escalating series of nervous breakdowns drove him, in 1931, to Munich, where his brother Georges lived, and where he spent most of the rest of his life confined to a psychiatric hospital. Unable to continue his scientific work, he poured his creative energies into painting, producing, by the time of his death in 1979, more than 3,000 arrestingly unfiltered gouaches. Their quality is mixed, but at their best, Gabritschevsky’s drawings are difficult to parse but unforgettably mesmerizing dispatches from some archetypal dream world.

His work was among the art brut “discovered” by Jean Dubuffet, and was also, thanks to the efforts of his brother, shown as early as the 1960s by the French gallerist Alphonse Chave. But “Eugen Gabritschevsky: Theater of the Imperceptible,” a wide-ranging introduction to the onetime scientist’s lifelong project of intimate creative and psychological struggle, is his first retrospective. The show, which comes to the American Folk Art Museum in New York after earlier runs in Paris and Lausanne, was organized by Antoine de Galbert and Noëlig Le Roux of Paris’s Maison Rouge, Sarah Lombardi of the Collection de l’Art Brut in Lausanne, and the Folk Art Museum’s Valérie Rousseau.

In two stiff charcoal and oil-pastel drawings made in the mid-1920s, while Gabritschevsky was studying the transmission of color in mimetic insects at Columbia, you can see, at least with the clarity of hindsight, the ominous fragility of his ability to organize experience coherently and the deadening effect of the attempt. One drawing shows a stand of New York skyscrapers, from their towering spires to the shadowy cars at their feet; the other shows two scientists hunched over a crowded lab table. In both drawings, the artist leans so heavily on a percussive contrast of black and white — making a column of space between two buildings leap out to strike the viewer’s eye and every beaker on the lab table glitter — that the overall compositions become almost illegible.

But once Gabritschevsky’s grip loosens and his inner chaos overflows its boundaries, the work comes alive. In one undated gouache, he delineates a formal walkway and three female figures in pinkish orange on a dark blue background decorated with a few windows of lighter blue and a series of fingernail-scratch arches. The figures are vivid but not detailed, and the scene is lucid but without perspectival depth. It doesn’t create the illusion of a space or structure that could be entered into, or even one worth peering at from closer up. Its meaning, in other words, doesn’t connect to any larger system but resides only in the point of personal encounter.