A large gallery at EMST showcases music by the Soviet composer Arseny Avraamov, whose “Symphony of Sirens,” backed by gun blasts and metallic droning, is a classic case of an artwork for a future that never came. Music and sound are major concerns of this Documenta, especially in the section housed at the Athens Conservatoire, Greece’s oldest music school. Graphical scores by Greek composers such as Jani Christou and Bia Davou are juxtaposed with nifty diagrams of a rare synthesizer, the EMS Synthi 100, which the Documenta team has been restoring for Greek electronic musicians. 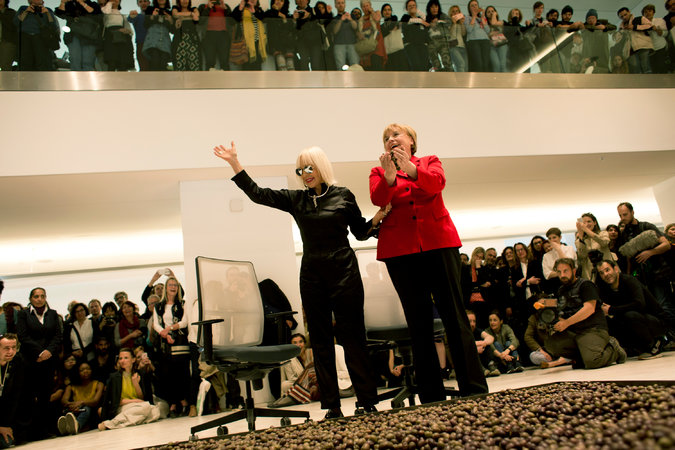 The Argentine artist Marta Minujín, left, and an Angela Merkel impersonator at Documenta.

Greece’s troubled relationship with Germany finds kitschy form in the EMST lobby. A large box there is filled with thousands of olives; the Argentine artist Marta Minujín, rather daftly, proposes Greeks could win debt cancellation with stone fruit. (At a performance on Saturday, which I missed, Ms. Minujín passed handfuls of the olives to a performer dressed in a red blazer and a frowzy wig, more than passable as German Chancellor Angela Merkel.) David Lamelas, another veteran Argentine, has rigged up a live feed at the entrance to the Conservatoire, showing debates in the Bundestag and the Hellenic Parliament — and a video of the Parthenon, looming as ever over this city.

That third feed from the Acropolis is a reminder that the ties between this country and Germany are far older than the eurozone. A Bavarian was Greece’s first king, after the country won independence from the Ottomans two centuries ago. Art history itself, in fact, is a Greek-German invention; it was 18th-century Prussian aesthetes, most prominently Johann Joachim Winckelmann, who first systematized the art of the past, and placed Greece at the summit.

The use and abuse of Classical antiquity, born in Greece and routed through Germany, therefore hums through Documenta 14. Campy hoplites and temple maidens appear in dramatic photographs from 1970 by Pierre Zucca, whose collaborations with the great artist and writer Pierre Klossowski mashed up sex and economics. Flatter are the Polish artist Piotr Uklanski’s reproduced stills from “Olympia,” Leni Riefenstahl’s notorious Nazi propaganda film. They hang alongside dire older paintings of Hitler by the American duo McDermott and McGough, each meant to memorialize a gay victim of the Holocaust but undone by their cheapness. (The legacy of the Holocaust may be even more present in Documenta’s Kassel half. Several artists are apparently working on projects related to the art collection of Cornelius Gurlitt, much of it believed to have been looted from Jewish families.)

A much more thoughtful analyst of Classicism is Daniel García Andújar, of Spain, who has filled an EMST gallery with 3-D-printed statues of the “Farnese Hercules,” the “Boxer at Rest” and more deformed riffs on Greek art, plus banks of images that place Greek art within a dizzying network of nationalist imagery and racial classification.

And everywhere, everywhere, bodies are in motion. The ongoing refugee crisis — a hopeless euphemism to describe the greatest moral failure of our time, which has left 65.3 million people displaced and pushed Greek social services to the breaking point — is inescapable in Documenta 14. Some artists here have responded poetically, including Peter Friedl, who films a stage adaptation of Kafka’s “Report to an Academy” in which the ape narrator is played by actors and nonactors of various races, languages and ages. Other times it leads to self-righteousness or glibness, as with the wonky musical instruments made by Guillermo Galindo, a Mexican composer, incorporating tubes salvaged from a refugee camp near Kassel.

And what are we to make of “Glimpse,” a 20-minute silent film by the Polish provocateur Artur Zmijewski that is this show’s most important work, as well as its most disturbing? It’s at the Athens School of Fine Arts, and was shot largely in the Jungle of Calais, France, the recently destroyed camp home to 6,000 migrants. The film’s initial, documentary sequences of plywood shacks and pitiful tents, hopeless against the rain, are searingly accusatory. Some refugees stare down the camera; a young girl smiles, while her father looks down, abashed. But then the film’s tone changes: The artist enters the frame, offers a new coat to a refugee and then paints its back with a dripping white X. Later, in Paris, he shoots African migrants in close-up, turning their heads slowly to get just the pose the artist wants. His film is brave and urgent; it’s also shockingly discomforting, and stamps on our expectations of objectivity and respect in depicting the least fortunate.

While much of the rhetoric of Documenta 14 invokes a common humanity, “Glimpse” proposes that even the do-gooders have motives of their own. That is a sentiment many Athenians, skeptical of the intentions of this German-born megashow, will find easy to understand. All the same, one of the central aims of modern art has been to break through society’s assumptions, to imagine living as equals even if we never get there. It takes courage to get your hands dirty, even if you wash them clean later in your Airbnb.

A caption accompanying an earlier version of this review misspelled the surname of the artist whose work was featured in a photograph; it is Nevin Aladag, not Adalag.

An earlier version of this article misspelled the first name of a Greek composer. It is Bia Davou, not Bai.