In a time when populism is suspect in many quarters, MASS MoCA gives it a good name. It is a place where it is possible to progress from novice to art enthusiast. This is usually considered the task of museums that have encyclopedic collections. But MASS MoCA, under Mr. Thompson, has managed it, out of principle or necessity.

The show with the widest appeal may be the three large installation pieces in “Until” by the Chicagoan Nick Cave in Building 5 — an open, column-free football-field-size space that remains MASS MoCA’s grandest. Mr. Cave has pushed beyond his well-known over-the-top assemblage-like “Soundsuits,” and branched out emphatically. “Kinetic Spinner Forest” is a veritable rain forest of 12,000 eye-dazzling spinners suspended from 1,500 thin cables. “Crystal Cloudscape” nestles a large garden of good and evil, especially racial evil, in an enormous hanging chandelier (and visited by ladder), and “Beaded Cliff Wall” is a cavern made of beaded netting.

The shows in Building 4 range from the rough-and-tumble “In the Abstract,” where 11 artists explore abstract art’s potential for political expression, to the refinement of Elizabeth King’s obsessively made, sometimes animatronic half-size figures and limbs; from Steffani Jemison’s often arcane explorations of the connections among writing, autonomy and race (including an excellent sound piece), to the accessible Conceptualism of Tanja Hollander’s “Are You Really My Friend?,” a project for which she traveled widely to photograph all of her Facebook friends. 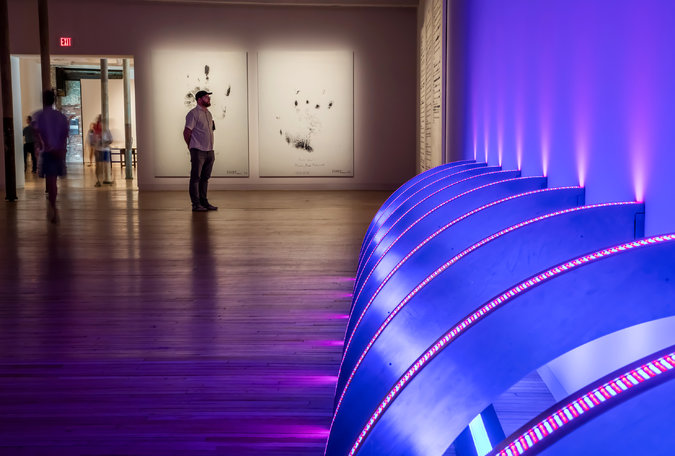 A work by Jenny Holzer.

MASS MoCA has a similar breadth regarding other arts, from performance art to the popular music events it holds nearly every weekend, indoors and out. (In 2010, it built a concert field that accommodates 10,000 people.) The band Wilco has a biennial one-week residency, and there’s an annual bluegrass festival, FreshGrass, in September. In fact MASS MoCA may be better known regionally for its music than for its art.

Mr. Thompson’s single best idea was to modify the Krens model: mixing in long-term exhibitions of extended loans with the mostly 10-month-long shows it had started out with. This move was made in spectacular fashion in 2008. That was when it opened the refurbished Building 7 with a 25-year exhibition of 105 in-situ wall drawings by Sol LeWitt, an influential Minimalist-Conceptualist who doesn’t figure as prominently in the Dia power grid as others. It remains one of the jewels in Mass MoCA’s crown.

Building 6 expands upon the LeWitt template. The Turrell show, on view for 25 years, is a triumph. The shows devoted to Ms. Holzer’s and Ms. Anderson’s work, which have 15-year terms, will be periodically changed and updated by the artists, which is good, because they can stand improvement. Still, Ms. Holzer’s way with language, morality and history — alternately poetic and withering, and expressed in incised stone benches or on silk-screen paintings of redacted government documents concerning the dark side of recent wars — has a renewed and tragic force in the current political climate.

The best thing in Ms. Anderson’s show is “The Chalkroom,” a gallery covered in raw, white-on-black graffiti that expands into a haunting multichambered journey if you use its virtual reality component; her indelible voice on audio serves as the guide. It establishes Ms. Anderson as one of the artists VR was invented for. On the other hand, in a series of large charcoal drawings from 2011, in a murky figurative style redolent of bad ’70s art, she is decidedly out of her element.

There are other things to see in Building 6: the assemblage works of Lonnie Holley; Dawn DeDeaux; and their great predecessor, Robert Rauschenberg; and a strange and enormous marble sculpture by Louise Bourgeois for which the floors had to be reinforced.

Perhaps the most promising symbol of MASS MoCA’s future is a 25-year exhibition that weaves its art and music dimensions and features the work of a “local” artist. This is the display of about 230 musical instruments handmade by Gunnar Schonbeck (1917-2005), a composer and all-around musical agitator who taught for 50 years at nearby Bennington College in Vermont.

Made of all manner of found materials and objects — metal pipe, coconuts, steel barrels, rebar — these drums, xylophones and banjoes in sometimes giant sizes are marvelous sculptural objects, and most are available for visitors to play. Avant-garde in appearance and sound, they reflect Schonbeck’s view that everyone is a musician and anything can make music.

Those instruments seem to be the epitome of MASS MoCA’s inclusive, multimedia, egalitarian ethic.

An earlier version of this review misstated the given name of an artist. She is Tanja Hollander, not Tracy.

A picture caption with an earlier version of this review misidentified a work of art by Anselm Kiefer. It is “Velimir Chlebnikov,” not “Hall Art Foundation.” The review also misstated the frequency of Wilco’s residency at MASS MoCA. It is a one-week residency every other summer, not a biannual three-week residency.