Home Entertainment Bafta TV Awards: What to look out for at this year's ceremony 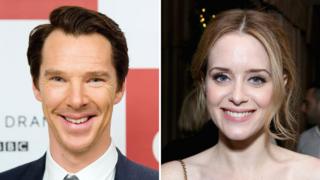 The event at the Royal Festival Hall will be hosted for the first time by former Great British Bake Off presenter Sue Perkins.

Here are a few things to look out for.

Who can we expect to see on the red carpet?

And by the look of the seating plan (above), The Crown’s Claire Foy will spend the ceremony sitting next to EastEnders’ Danny Dyer.

She can tell him about Queen Elizabeth. He can tell her about the Queen Vic.

But why’s Graham Norton not presenting as usual?

Sue Perkins is taking the reins this year because Norton will have been busy presenting the Eurovision Song Contest in Ukraine one day earlier.

When she was announced as host in March, Perkins tweeted: “Beyond chuffed to be the one keeping the inestimable @grahnort ‘s seat warm this year.”

Which shows have the most nominations?

What can we expect from the winning speeches?

At last year’s Baftas several winners used their speeches to defend the independence of the BBC. The ceremony took place just days before the government published a white paper on the corporation’s future.

This year a general election is looming.

Bafta is reported to have emailed nominees asking them to offer “a short anecdote or an interesting detail about the production” in their victory speeches.

According to The Guardian, some of its recipients have dubbed it “a ham-fisted attempt to avoid controversy”.

Will The Crown reign supreme?

The Crown’s first 10 episodes launched on Netflix in November. Writer Peter Morgan intends to tell the entire story of Britain’s monarchy from the reign of George VI, the Queen’s father, over 60 episodes.

Claire Foy is up for leading actress for her portrayal of the young Queen Elizabeth.

Last year Bafta changed its rules on eligibility which has allowed shows with international funding, such as The Crown, to be entered outside the international category.

The best actress race is one to watch

This is Claire Foy’s second consecutive nomination for lead actress. Last year she was nominated for her role as Anne Boleyn in Wolf Hall, but lost out to Doctor Foster actress Suranne Jones.

This year’s competition is just as tough.

Yes, we’re talking about those shows that weren’t made for the traditional broadcast channels.

Netflix has never won a TV Bafta, so victory for The Crown would be a big deal.

It has another shot at glory with sci-fi hit Stranger Things, a strong contender in the international category.

Last year that category went to Netflix rival Transparent, on Amazon Prime, about a Los Angeles family who discover that their retired father is a transgender woman.

And who did it beat? Netflix’s Narcos, among others. Ouch.

And let’s not forget all the nominees from online-only channel BBC Three.

Will the stars of Fleabag be jumping for joy?

Fleabag is nominated for best scripted comedy, while Waller-Bridge and Fleabag co-star Olivia Colman are up against each other for female comedy performance.

They are up against Lesley Manville for Mum and Diane Morgan for Cunk on Shakespeare.

It’s already been announced that the Ab Fab star is being honoured with the prestigious Bafta Fellowship.

Perhaps best known for playing champagne-sipping Patsy Stone, Lumley has had one of the most varied careers in British entertainment.

After starting out as a model she was propelled to fame in the 1970s as Purdey in The New Avengers.

She once took 27 takes to kiss Leonardo DiCaprio when they were filming a scene for The Wolf of Wall Street.

Surely that deserves a Bafta all of its own.

When can I watch the ceremony?

The Virgin TV British Academy Television Awards will be broadcast on BBC One on Sunday at 20:00 BST.