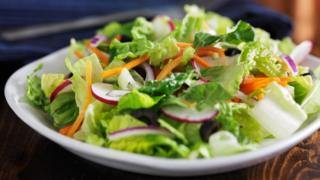 Bagged salad can fuel the growth of food-poisoning bugs like Salmonella and make them more dangerous, a study says.

University of Leicester scientists said the moist environment combined with nutrients leaching out of chopped leaves created the perfect breeding ground for bacteria.

The researchers said they were shocked at the way the bacteria thrived, even in the fridge.

They advised people to eat bagged salad on the day they bought it.

Despite their wholesome nature, fresh green leaves and salad foods are often involved in food poisoning.

An outbreak that affected more than 2,000 people across Europe in 2011 was traced back to bean sprouts and this year, officials in England traced an outbreak that killed two people back to bags of rocket leaves.

The research team wanted to understand what happens inside bags of salad.

Bags are often moist to help keep the salad crisp and fresh and the plants have often been chopped into individual leaves for convenience.

The study showed sugars, proteins and minerals escaped from the cut leaves into the water in the bag.

The study, published in Applied and Environmental Microbiology, showed that an initial contamination of 100 Salmonella bacteria would increase to 100,000 within five days.

She said she was also “shocked” that the bugs did so well in the chilled environment in the fridge.

Dr Freestone told the BBC News website: “Juices that naturally leach from the leaves have the potential to increase the growth of any pathogen that might be present and establish them so strongly that washing wouldn’t be enough to eradicate them.

“Don’t be alarmed, we still eat bagged salad, but don’t keep bagged salad any longer than you need to, we normally buy it on the day we eat it.

“Buy the bag with the best sell-by date, avoid lots of mushed leaves and if it’s inflated then don’t use it.”

There are also suggestions that the bacteria become more dangerous in the bags.

A genetic analysis of the Salmonella showed they had gained the mutations that would help them to infect people.

Dr Freestone told the BBC: “We did see bacteria whose behaviour had turned more to virulence.

“I think the bacteria are making a molecular mistake and mistaking chemicals in the salad leaf for ones in the host.”

Dr Jeri Barak, from the Food Research Institute at the University of Wisconsin-Madison, said: “It would be fair to conclude that if Salmonella is present in salads, it might grow to infectious doses.

“The rates of produce that have been found to be contaminated are between 0%-3%.

“Consumers should treat bagged salads as temperature-sensitive food products, like milk and ice-cream.”

Dr Kimon Karatzas, from the University of Reading, said: “Avoiding fresh produce is not a solution, but if possible, it would be preferable to buy uncut fresh produce over chopped, and to always wash it before you eat – even the ones that are already washed.

“Furthermore, keeping these foods in the refrigerator is important.”