The players in the real-life drama are almost as colorful as the characters in the movie. Those denouncing “Matilda” include a bishop rumored to be Mr. Putin’s personal confessor and a photogenic young prosecutor from Crimea elected to the State Duma, or Parliament, after Russia seized the peninsula from Ukraine.

The prosecutor, Natalia Poklonskaya, has emerged as a public symbol of the Russification of Crimea and was a target of sanction by the United States because of her outspoken support. But she has since raised eyebrows for different reasons, like claiming that a bust of Nicholas II in Crimea oozed myrrh this year on the 100th anniversary of his overthrow.

“This is a miracle that neither scientists nor anybody can explain,” she said in a March TV interview. “Our sovereigns are helping us. They died for us so that we can make Russia flourish and great.”

Ms. Poklonskaya commissioned a four-member panel to review the film, including specialists in religious studies, literature and psychology. Some of them served previously on advisory committees that condemned the punk rock protest band Pussy Riot and a Siberian version of the opera “Tannhäuser,” which was subsequently closed.

The panel’s 40-page report proclaimed that “Matilda” denigrated Nicholas’s image, not least because Kshesinskaya was judged far too “ugly” to have attracted his attention. Although the affair is well documented in personal letters from both protagonists in the state archives, the report called their liaison a “myth.” 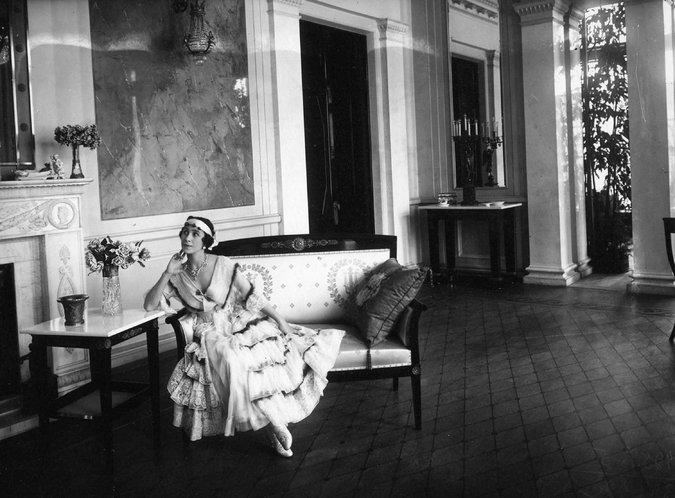 “The negative image is even worse due to the choice subscribed to him of a repulsive, ugly woman from the point of view of classic European and in particular Russian beauty,” read the report. “You can see in photographs her crooked teeth and the form of her face that makes her look like a rat.”

The fact that the actress playing Kshesinskaya, Michalina Olszanska, has a “satisfactory appearance” changes nothing, since most viewers will recall the real ballerina, the report said. (The panel also damned the choice of a German actor, Lars Eidinger, to play Nicholas, describing him as a “pornographic” star because he appeared naked in a recent Peter Greenaway movie.)

The director, Aleksei Y. Uchitel, is somewhat bewildered by the early criticism.

“This was a big surprise for me,” he said in an interview. “I never expected the film to provoke controversy even before it was out. My main concern is that they haven’t seen the movie yet, but they are already judging it.”

The director’s plea that people should wait to see the finished film before rendering judgment has been endorsed by the Ministry of Culture and various senior officials, including Dmitri S. Peskov, Mr. Putin’s spokesman.

But that has done little to douse the hostility from the Russian Orthodox Church and its adherents. Some want the movie banned, while the most extreme have threatened to torch movie theaters that show it.

The main objection from the church is that because Czar Nicholas II and his wife were canonized in 2000, the movie is an insult to the faithful, which is a crime in Russia.

“This film represents, in my opinion, the apotheosis of vulgarity,” Bishop Hilarion, the head of the church’s external relations department, said on television, noting that the director had invited him to view a rough cut. The bishop conceded that there had been some manner of love affair, although he dismissed it as a youthful infatuation.

Bishop Tikhon, the abbot of a historic Moscow monastery and Mr. Putin’s putative confessor, also attacked the movie in an interview with the Rossiyskaya Gazeta newspaper late last year for what he called its “conscious distortion of history.” The bishop demurred on the subject of banning the film, saying its release should be met with stern warnings about truth.

Ms. Poklonskaya, who did not respond to requests for an interview, is one of those seeking to have the movie banned, twice demanding that the country’s prosecutor general investigate the project.

“What does this film bring?” she said on Tsargard TV, a privately owned channel that promotes Russian Orthodox and nationalist views. She had no need to see the film to assess its content, she said, because viewing a script was enough.

“Does it teach love for one’s homeland? Does it teach patriotism, our family values, fidelity?” Ms. Poklonskaya said, scoffing at the film’s supporters’ contention that it is a romantic love story. “You cannot insult the feelings of others with these stories, particularly on the basis of religion, on the basis of faith.”

She also blamed the film for the letters sent by religious extremists to hundreds of movie theaters threatening arson if they showed “Matilda.” They were provoked, she said. Critics of the movie are particularly incensed that the state paid a third of its $25 million budget.

Mr. Uchitel, who has made several lyrical, romantic movies based on Russian history, said he had originally meant to film a biopic about Kshesinskaya (pronounced Kshay-SIN-sky-ya), inspired by her diaries. Eventually, he began to focus more on the character of Nicholas II, and what might have happened had he chosen love over the throne.

He is dismissive of the protests, including the reported 20,000 letters Ms. Poklonskaya said she had received opposing the movie. Many seem to be form letters, he said.

Even as Mr. Uchitel acknowledged that the movie contained elements of fantasy, he questioned the historical interpretation used by his religious critics. Nicholas II became a sainted martyr because of the way he and his family died — in a hail of bullets fired by a Bolshevik firing squad — not because of the way he lived.

“Their main concern is that since he was shot with his whole family, and thus became a saint, he could not have had any affairs,” Mr. Uchitel said. “On the contrary, it is totally correct to show him in this human way.”

The director described the work of the review panel as nonsense. “It is kind of offensive on the part of the experts to say that Nicholas II fell in love with an ugly woman,” he said. “This is at the level of kitchen gossip, not expertise.”

In support of Mr. Uchitel, a group of about 40 prominent filmmakers signed an open letter to the government saying they did not want to relive the censorship of the Soviet Union, which had “maimed the fates of artists and hindered the development of art.”

By many accounts, Kshesinskaya possessed a striking allure that attracted a wide range of admirers.

After her very first performance at the Mariinsky Theater, part of her ballet school graduation ceremony, she was introduced to the tsarevich at dinner and to some extent saw the future via her diary.

“So, the 1st performance was lucky for me: I had success and met the heir,” she wrote in an excerpt published by the Moskovsky Komsomolets tabloid newspaper. “But that’s enough only for the 1st time; later on — I know for sure — I won’t be content with this, I’ll wish for more, such is my temper.”

The future czar ended the affair when he married a German princess, but the ballerina had more royal suitors ahead of her: She went on to date two of the czar’s cousins, marrying one of them and ultimately dying in Paris in 1971, several months shy of her 100th birthday.