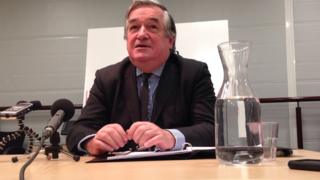 Sir James Munby, a senior judge, said there would be “blood on our hands” if the 17-year-old did not receive adequate supervision

A bed has been found for a suicidal girl, a day after a judge criticised a lack of care provision available when she is freed from youth custody.

Sir James Munby, said there would be “blood on our hands” if the 17-year-old did not receive adequate supervision.

The girl, known as X, is due to be released in 10 days and was without a place at a secure unit.

Mike Prentice, NHS North’s medical director, said the bed would available ahead of her release date.

“Following extensive assessments, the NHS has identified a bed for this young woman in a safe and appropriate care setting which will best meet her needs,” he said.

The girl has tried to kill herself several times.

On Thursday, Sir James, the president of Family Division of the High Court, said society should be “ashamed” for not protecting a suicidal girl in secure custody and he called the situation “utterly shaming”.

The judgement in the case of X – who is in the formal care of Cumbria County Council – revealed she was convicted at a youth court and has been detained in custody for almost six months.

An earlier ruling heard how unit staff had witnessed “a profoundly disturbing and distressing scene when X self-harmed by repeatedly banging her head and face against the wall”.

Staff have said she has to be checked every 50 seconds when she is in the shower.

Sir James said: “I feel shame and embarrassment; shame, as a human being, as a citizen and as an agent of the State, embarrassment as President of the Family Division, and, as such, Head of Family Justice, that I can do no more for X”.

Her case also provoked criticism about a lack of adequate mental health provision.

Earlier this week, Health Secretary Jeremy Hunt announced that thousands more mental health workers were to be recruited by the NHS in England.

The government said an extra £1bn already promised for mental health services in England would fund the scheme – part of a pot of £1.3bn committed in 2016 to transform provision.