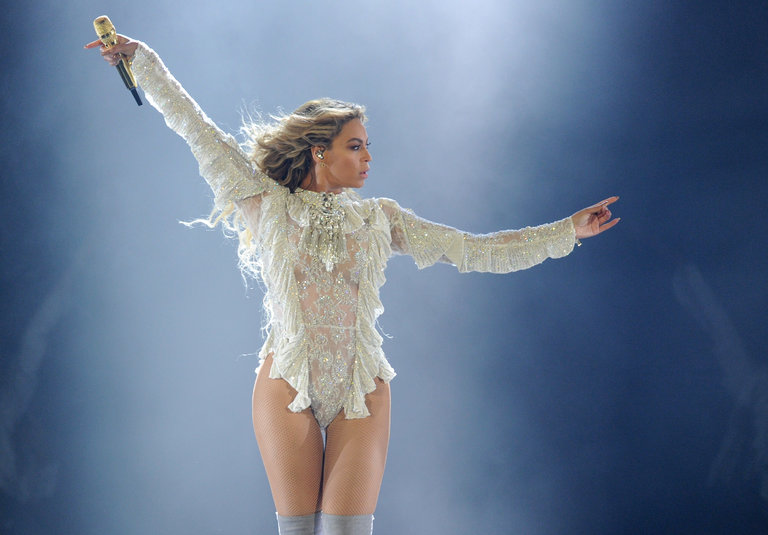 Beyoncé in May at the Rose Bowl in Pasadena, Calif.

Beyoncé, Drake, Rihanna and Adele lead the nominations for the 59th annual Grammy Awards, the organization behind the ceremony announced on Tuesday.

With nine nods for “Lemonade,” an album and film that explored race and infidelity, Beyoncé had more nominations than any other artist. But in each of the top three categories she will compete directly against Adele, the British diva whose album “25” was one of the music industry’s biggest success stories in years.

For album of the year, “Lemonade” and “25” will also contend with Drake’s “Views,” a monster streaming hit; “Purpose,” Justin Bieber’s comeback vehicle; and “A Sailor’s Guide to Earth” by the country singer Sturgill Simpson, a critical favorite but modest seller that may be the year’s wild card.

For record of the year, an award for the performer and producers of a single track, Beyoncé’s “Formation” faces off against Adele’s “Hello,” along with “7 Years,” a mellow hit by the Danish group Lukas Graham; “Stressed Out” by the genre-mixing pop duo Twenty One Pilots; and Rihanna’s “Work,” which features Drake.

In the song of the year category, which recognizes songwriters, “Formation,” “Hello” and “7 Years” are up against Mr. Bieber’s “Love Yourself” and Mike Posner’s “I Took a Pill in Ibiza,” an acoustic song that had a second life as a dance remix.

The nominees for best new artist include the Chainsmokers, the D.J. duo that had a major hit with “Closer”; Chance the Rapper, who has climbed the charts as an independent; the country singers Maren Morris and Kelsea Ballerini; and the singer and rapper Anderson .Paak.

In all, Drake and Rihanna are each up for eight awards, and Adele five. Chance the Rapper has seven nominations in five categories; like Drake, he is up for all four rap trophies.

No announcement of Grammy nominees is without surprises.

Kanye West, whose album “The Life of Pablo” was one of the most closely watched pop events of the year, received eight nominations in five categories, including all rap awards. But the members of the Recording Academy, the organization that presents the awards, did not choose Mr. West — a frequent Grammy critic — in any of the top categories for his own work. (He is, however, one of the 20 credited producers on Drake’s “Views.”)

On the other hand, Beyoncé was nominated for seemingly every award possible. Besides the top fields, she is up for awards in the pop category (“Hold Up,” pop solo performance), rock (“Don’t Hurt Yourself,” with Jack White, for rock performance), R&B (“Lemonade” for urban contemporary album) and rap (“Freedom,” with Kendrick Lamar, for best rap/sung performance).

Beyoncé has now been nominated 62 times in her career, more than any other female artist. She has already won 20 awards, and if she wins eight this year, Beyoncé would surpass Alison Krauss as the most-honored woman in Grammy history.

Among the other major nominees, members of Twenty One Pilots are up for a total of five awards, and those up for four include the producers Benny Blanco and Greg Kurstin; Mr. Bieber and Ms. Morris; and David Bowie, who died in January after releasing his album “Blackstar.” In his lifetime, Mr. Bowie won only one Grammy, along with a lifetime achievement award.

The Grammys, long criticized for celebrating aging stars at the expense of vital young talent, have taken steps in recent years to better reflect the current pulse of pop music. The Recording Academy has expanded its membership and become more active in campaigning for musicians’ rights in Washington.

“There was a time when the membership of the academy may have skewed a little older,” Neil Portnow, the academy’s president, said in an interview. “But as we have evolved and the community of membership has broadened, you probably see some reflection of that in how the nominations come out.”

Yet there were still some striking absences from this year’s nominees, including Drake’s song “One Dance.” By far one of the biggest hits of the year — it was No. 1 for 10 weeks — it was not nominated for any award.

Another absence is the result of an apparent protest. Frank Ocean, the R&B singer and songwriter whose album “Blonde” was another major pop event, declined to submit his material for consideration. In an interview with The New York Times last month, Mr. Ocean called the Grammys’ nomination system “dated,” and added: “I’d rather this be my Colin Kaepernick moment for the Grammys than sit there in the audience.”

In response to that, Mr. Portnow said, “If you look at the 22,000-plus entries in our process, it’s pretty clear to me that the vast majority of artists feel that we are important, that they do aspire to be honored by their peers, and that the process we’ve created is democratic and transparent.”

In the music industry, Mr. Ocean’s stance makes him an exception, with many artists and their business representatives spending months campaigning for the nominations, some more openly than others.

This year Chance the Rapper benefited from a rule change that allowed streaming-only albums like his “Coloring Book” mixtape to be considered for awards. In an ad in Billboard, the industry’s major trade publication, he asked simply, “Hey, why not me?”