The Dixie Chicks, meanwhile, are still recovering from their world going kablooey after the lead singer, Natalie Maines, told a crowd in London just days before the 2003 invasion of Iraq that she stood with the pacifists of the city and felt “ashamed” that President George W. Bush was from Texas. Country radio disowned them. Their albums were burned. Their lives were threatened. 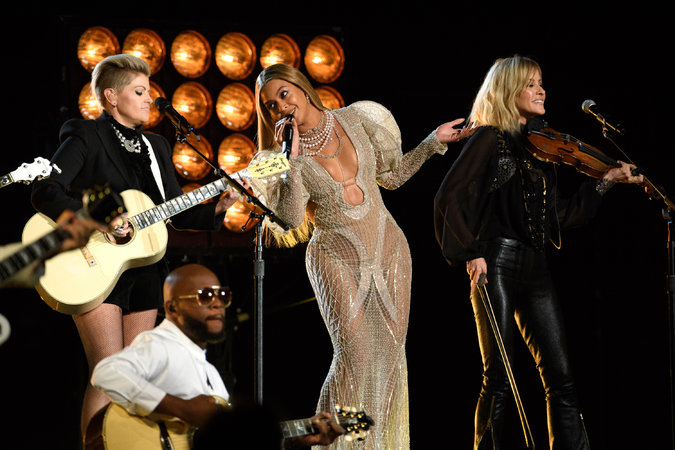 Beyoncé appeared with the Dixie Chicks at the Country Music Association Awards on Wednesday, performing her song “Daddy Lessons.”

So on the surface, the collaboration was part racial optimism, part rapprochement. The show’s day-of announcement that the world’s most famous pop star was going to play with the best-selling female band of all time was out of Beyoncé’s playbook. In terms of viewership, it might have seemed like common sense.

But the reaction to the announcement, and then to the performance, was as polarizing as everything else in the past 18 months. You could feel politics just in the way that news of the pairing goosed the internet and got people posting on Twitter that they’d stop what they were doing (which for many entailed pausing a very good, unbearably tense World Series Game 7) to see what these four would get up to.

Other people groused that none of these women had any business at the C.M.A.s. That’s debatable. But I can imagine certain country music purists, already miffed at the hip-hop coating of a frat house-friendly outfit like Florida Georgia Line, sucking their teeth at the appearance of a seemingly ubiquitous black pop star. They were being triggered on the one hand and trolled on the other. Is no space safe anymore?

And that was a source of the drama, that these women knew they could have it more than two ways. They could make music while disturbing the peace. The show certainly didn’t need Beyoncé. And it wouldn’t seem to want the Dixie Chicks, who have won 10 C.M.A.s but haven’t appeared at the awards show in years. So you could detect something pointed churning beneath the surface of a pretty exuberant performance. “Daddy Lessons” isn’t an innocent song. It’s about armed self-defense that a woman learns from her father to use against a man. (“Oh, my daddy said ‘shoot.’”) This new version, which was recorded as a single, becomes a hoedown, paving over the emotional swamp of the original song with more harmony.

Beyoncé leaves the second verse to Ms. Maines, who sings: “Daddy made me fight/ It wasn’t always right/ But he said, ‘Girl, it’s your Second Amendment.’” She’s the one here who sounds most ready to fight. On their current tour, the Dixie Chicks play one of their biggest hits, “Goodbye Earl,” with an image of Donald Trump defaced with devil horns projected behind them.

Softening the bellicosity of “Daddy Lessons” at the C.M.A.s lets the song seem more like a multiracial party, with black horn players playing alongside an especially funky white one. But the fun was a little tentative, too. Ms. Maines and her bandmates, Emily Strayer and Martie Maguire, looked understandably nervous to be hosting it. They wore bandit black. Beyoncé wore the sort of ornate, sheer white that turns a special guest into Glinda the Good Witch. But the Chicks’ searing wit was still intact. “Long Time Gone” isn’t a song you accidentally do in the middle of an election in which one candidate has vowed to build a wall along the Mexico-United States border and to restore outsourced American jobs.

In the song, someone from a dying town explains why she’s never going back (“Daddy sits on the front porch swinging/ Looking out on a vacant field/ Used to be filled with burley t’bacca/ Now he knows it never will.”) It’s John Steinbeck with a banjo. It’s “Hillbilly Elegy” with harmonies. The video, from 2002, is, amazingly enough, set in Mexico. The bit they used on Wednesday was pointed for its restraint: “Now they sound tired but they don’t sound Haggard/ They’ve got money/ But they don’t have Cash/ They got Junior but they don’t have Hank/ I think, I think, I think —” Beyoncé joins them here, and they’re back to “Daddy Lessons” without finishing the original line: “I think, I think, I think, the rest is a long time gone.”

Part of me wanted to play dumb. Why couldn’t this just be what it was? Four women from Texas making music in Nashville? I mean, something similar occurred when Beyoncé joined the chronically collaborative Georgia outfit Sugarland for a county-fair rendition of “Irreplaceable,” at the decidedly neutral American Music Awards. That feels like a lifetime ago now, before Beyoncé was an “anti-police” activist, before America required re-greatening. It’s possible now that she’s come to mean too much, that she’s no longer a star we can simply like. She’s a star we have to need. She can’t stop signifying. Suddenly, she’s being asked to do for persecuted white women what Oprah Winfrey does for books.

Beyoncé can’t stop playing with signification. But neither can her stagemates: They speak Beyoncé. That’s the power of performers: political provocation. Sometimes, with Beyoncé, it can get strange. I, at least, am still figuring what to do with the photographs of her backstage in Cleveland on Friday, watching an elated Hillary Clinton beaming up at Jay Z, knowing that his alleged infidelity inspired his wife’s most recent work of art, and that Mr. Clinton’s indiscretions inspired Beyoncé’s biologically mystifying use of “Monica Lewinsky” as a verb. The optics on Wednesday were more subtly loaded with confrontation.

Packing part of a song about a decaying heartland into a number about a woman’s right to fend off an injurious man and playing that song at a country-music awards show less than a week before a presidential election — wait, before this presidential election — and doing so as an interracial band of outlaw feminist superstars whose patriotism has been, at various times, deemed suspect and whose performance together gets a big ovation anyway must be considered some kind of triumph.

Beyoncé’s saying “I’m with her” on Friday might have been a big deal. But so was riding into Nashville as a fourth Dixie Chick. Beyoncé simultaneously took a side in a years-old culture war and joined a posse. And in doing so, the Dixie Chicks weaponized the chip on their shoulder: She’s with us.