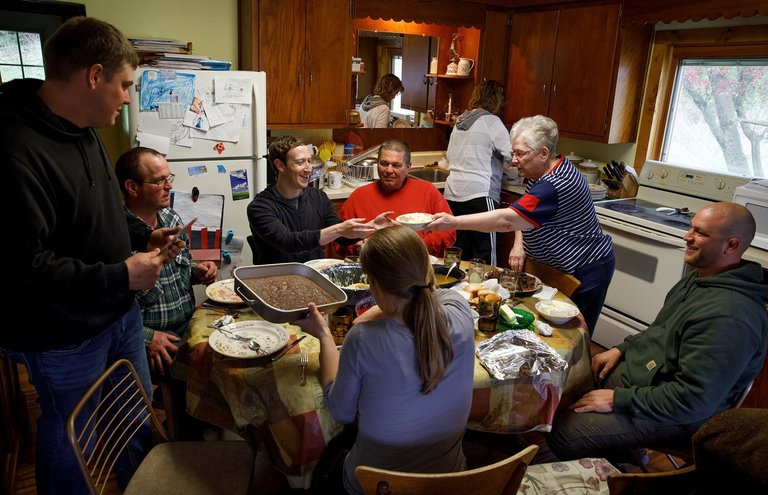 Mark Zuckerberg of Facebook, third from left, sitting down with the Gant family at their farm in Blanchardville, Wis.

“My personal challenge for 2017 is to have visited and met people in every state in the U.S. by the end of the year,” he wrote on Facebook. “My hope for this challenge is to get out and talk to more people about how they’re living, working and thinking about the future.

How, then, has it been going? Well enough, it seems, that the multibillionaire discussed what he learned so far from the trips in a commencement speech at Harvard University on Thursday, writes Mike Isaac, a technology reporter at The New York Times.

In his address at Harvard, where Mr. Zuckerberg famously started Facebook, the executive talked about how his travels had influenced his thinking about community. He said that he had met all kinds of people, including children in juvenile detention, factory workers and opioid addicts. He said that to keep society pushing ahead, people needed a sense of purpose, calling it a “generational challenge.”

Mr. Zuckerberg has kept a running log of his trips — to Wisconsin, Ohio and South Carolina — on Facebook, complete with tasteful photos. Since he is only about halfway through his goal of seeing all the states in the Union, expect to see more photos — and more of what he has learned infusing not only his speeches, but also how Mr. Zuckerberg approaches Facebook and other aspects of his life, like philanthropy.

The weekday Bits newsletter will not publish on Monday, and will resume on Tuesday.