But with new technologies turning automobiles into supercomputers on wheels, Delphi is trying to reinvent itself. Over the last several years, it has shed almost all of its old operations, and begun acquiring and investing in high-tech businesses that in many ways are more like Intel than G.M.

Cars produced today include dozens of computer chips along with cameras, radar, millions of lines of software and wireless communications links. Future vehicles will have all that and more, said Kevin P. Clark, Delphi’s chief executive.

Delphi, he added, hopes to be the supplier of networking components — like wiring, software and intelligent connectors — that link all those complex systems and enable them to work together under the hood.

“It’s the intelligent architecture that allows all the advanced safety systems, all the autonomous driving software, all the infotainment software to operate effectively,” Mr. Clark said.

To borrow a parallel from Silicon Valley, Delphi is hoping to become the Cisco of the self-driving car. Cisco is the tech giant that provides routers and switches that form the backbone of the internet.

Cisco “is a pretty good analogy for us,” Mr. Clark said.

Mike Ramsey, an analyst at Gartner who tracks the development of connected and self-driving cars, said Delphi is attempting the most extensive transformation by an old-line automotive company that he has run across. “They are the standard-bearer for this,” he said.

Its success is by no means assured. Technology shifts quickly, and the company has far more experience in the slower-paced, low-risk approach of the traditional auto industry, where innovations are engineered and tested for years before they are introduced. And Delphi’s investments in start-ups may not pan out.

Delphi hopes to create a new business that can gather vast amounts of data from vehicles — about how and where they go, how they’re driven and how they’re running. The company then envisions selling insights drawn from the data trove to automakers, insurance companies and possibly even advertisers.

A driver who frequently drives to Starbucks locations, for example, could be targeted with Starbucks coupons via email or text. Someone whose data shows a pattern of gentle driving could be offered lower insurance rates, said David Ploucha, the president and co-founder of Control-Tec, a start-up Delphi acquired for $124 million as part of this data business strategy.

It’s a business model unlike anything the auto industry has ever seen. It’s similar to what Google does by targeting ads to users based on terms they have searched, or how Facebook tailors ads and news posts based on what a member has “liked” on the social networking site. 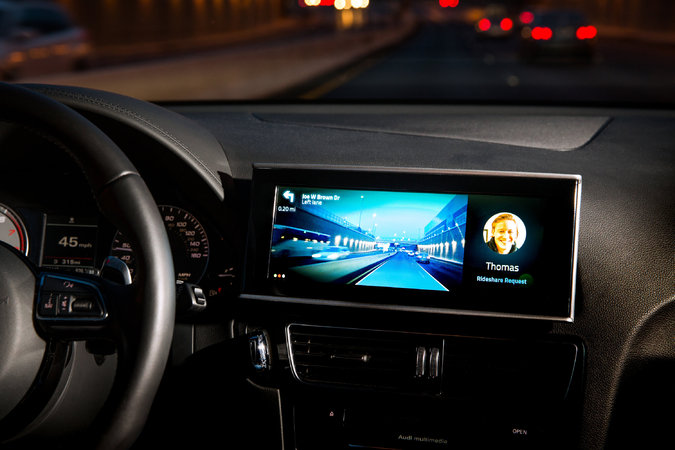 Delphi aims to become the technological backbone of self-driving cars.

“The idea is to influence how people spend money in relation to their vehicle,” Mr. Ploucha said.

Mr. Clark said he was convinced such data services will evolve into a multibillion-dollar industry, though it may be years before this vision is confirmed.

The boldness of Delphi’s plan underscores how dramatic technological changes are loosening the dominant role traditional carmakers have in the auto industry, while opening opportunities for new players.

Already, Tesla has jumped ahead in battery-powered cars, and in distributing software updates to its cars over the air, the same way iPhones receive new operating systems. Both Tesla and Google are ahead of many, if not most, automakers in self-driving technology. Uber, the ride-hailing company, is trying to press ahead in autonomous cars, too.

Danny Shapiro, a senior executive at Nvidia, a chip maker that provides some of the powerful processors used by Tesla, Audi and many other automakers, said he would not be surprised to see some reordering of the auto industry in the next five to 10 years. “I do believe there will be a rise and fall for some players,” he said.

Tesla, thanks to its rising stock, recently passed both Ford and G.M. in terms of market value.

Mr. Clark, the Delphi chief executive, hopes his company will be one of the rising stars. For most of the last 20 years, it has been in a slow decline. Delphi was created to take over all the parts businesses G.M. no longer wanted in-house.

It was spun off as a stand-alone company in 1999. Six years later, it filed for bankruptcy, slammed by high labor costs and the razor-thin margins of making low-tech commodity parts.

Its Chapter 11 reorganization lasted four years, and resulted in plant closings and the elimination of tens of thousands of factory jobs. The company’s steering systems business was sold to a Chinese investor. The remaining company kept operations in automotive electronics and engine technologies such as fuel injectors and diesel components.

To preserve Control-Tec’s freewheeling start-up culture, Delphi is allowing it to operate largely as an independent company. That includes one lounge where its engineers build Lego cars and occasionally play board games, and another where they share homemade beers.

“The worst thing we could do is stifle the creativity, the energy they have,” Mr. Clark said.

Delphi has also partnered with Intel and Mobileye, an Israeli maker of camera systems that can spot obstacles and trigger braking. Intel has since agreed to acquire Mobileye in a $15.3 billion deal set to close later this year.

This year, Delphi went further, acquiring a start-up with technology for wirelessly transferring data and software to and from vehicles, and investing $15 million in another Israeli company, Otonomo, which specializes in organizing masses of data into forms that automakers and others will pay for. These two investments, along with Control-Tec, make up the foundation of the data business Mr. Clark thinks Delphi can create.

Then in May, Mr. Clark announced a final break with the traditional automotive industry. Delphi’s powertrain business, which makes fuel injectors and diesel technology, will be spun off as a separate company by the first quarter of next year.

The split will leave behind a new high-tech Delphi, known inside the company for now as “Remain Co.” “How we get there from here, we’re all doing a lot to figure that out,” he said.

An earlier version of this article misstated when Delphi will spin off its powertrain business into a separate company. It will be by the first quarter of next year, not the end of this year.