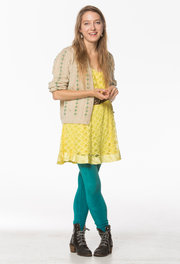 Clare Barron, an emerging American playwright whose work Off Broadway has garnered acclaim, was named the winner Monday of the Susan Smith Blackburn Prize for women playwrights.

The prize — $25,000 and a signed print by Willem de Kooning — is given annually in recognition of a work written by a woman for the English-language theater. Ms. Barron, 31, who is from Wenatchee, Wash., is being honored for “Dance Nation,” a new play about a preteen dance competition, which is to be given its first production at Playwrights Horizons, an Off Broadway nonprofit, next year. The play was previously honored with the Relentless Award, given in memory of the actor Philip Seymour Hoffman.

Ms. Barron’s best known previous play was “You Got Older,” a 2014 work presented by Page 73 Productions, which won an Obie award for playwriting. Last year her play “I’ll Never Love Again,” at the Bushwick Starr, was praised by The New York Times critic Ben Brantley, who called Ms. Barron an “exciting young playwright” and said she “has the rare gift of being both oblique and perfectly clear — or as clear as one can be about the irresoluble conflicts of life.”