Spurred by attractive state subsidies, the Norwegian oil company Statoil is chasing after new oil and gas fields in the Arctic. Nearly all of the supply is destined for export — and to show up in the carbon emissions of countries that burn Norwegian oil and gas.

There’s a lot of it, too. Peter Erickson, a senior scientist with the Stockholm Environment Institute, a research organization, found that emissions from Norway’s oil exports this year will be 10 times as much as Norway’s domestic carbon emissions.

As governments wrestle over what they should do to keep the planet from heating up to dangerous levels, critics contend that Norway should curb the supply of fossil fuels, rather than just trimming demand among its own people.

“Norway has set out to be a global leader in climate action, yet continued expansion of oil and gas production could eclipse the benefits of Norway’s domestic emission reduction efforts,” Mr. Erickson and his colleague Adrian Down wrote in a recent paper.

It’s one of the problems built into the Paris climate accord that President Trump promises to leave, Mr. Erickson argued: Countries are measured by how much they reduce their own emissions, within their own borders, not by the impact they have on the planet as a whole.

Norway is aiming to shrink its own carbon emissions by 40 percent, exceeding the European Union’s targets. It already generates all its electricity from hydropower. A short-distance electric ferry has started navigating one of the fjords.

But oil and gas are vital to Norway’s economy, representing 12 percent of gross domestic product and more than a third of Norwegian exports, according to the nation’s petroleum directorate.

And while there may be a global effort under the Paris agreement to reduce emissions, that certainly has not stopped the international race for Arctic oil. Norway is in the vanguard of that scramble, trailed by Russia, Canada and the United States. 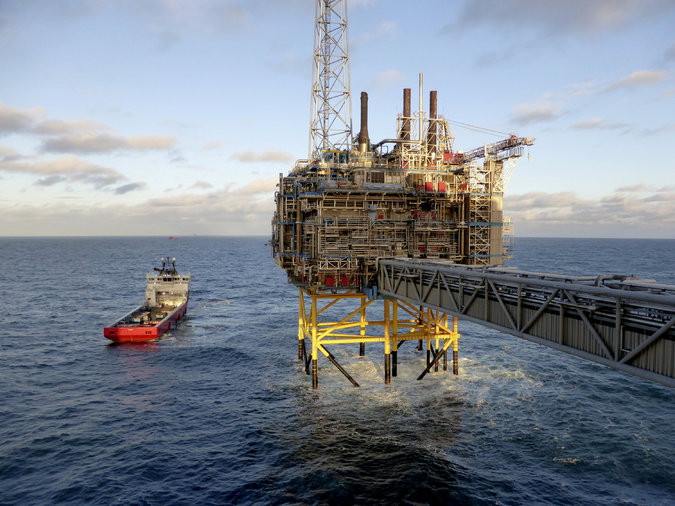 The Arctic is feeling some of the most acute effects of global warming. Temperatures are rising at least twice as fast as the global average, scientists have found. The Arctic had less sea ice at winter’s end than has been seen before in nearly four decades of satellite measurements. The Barents Sea was almost devoid of ice this past winter.

But, paradoxically, climate change may also aid Norway’s export ambitions. The melting waters stand to open up new shipping routes that make it cheaper for Norway to sell its oil to countries in Asia.

Greenpeace Norway has sued the government, arguing that granting new permits to drill in the Arctic is inconsistent with its obligations under the Paris accord, which seeks to keep the global rise in temperatures since the preindustrial era below 2 degrees Celsius.

In May, Statoil began work on five new exploration wells in the Barents Sea, and the company is bullish on the prospects. It says that it explores only in ice-free waters. (Cleaning up an oil spill in ice is next to impossible, environmentalists say.)

A spokesman, Morten Eek, said that Statoil takes great care to mitigate against environmental risks, that its extraction process leaves a smaller carbon footprint than the global average, and that the company saw no reason to stop exploring now.

“There will be demand for oil and gas even in a 2-degree scenario going forward,” Mr. Eek said.

In any case, he pointed out, it can trade its emissions allowances across Europe, as part of the European Union’s emissions cap-and-trade system, meant to create incentives to reduce a company’s carbon footprint.

The oil market, though, may have other ideas. Norwegian oil is expensive, relative to oil from many other parts of the world. Falling oil prices worldwide could make Norway’s supply even less competitive on the international market, said Thina Margrethe Saltvedt, an analyst at Nordea, a market research company.

“The world might not need our oil,” she said.

Then there are the climate implications, she added: “We want to be a leader in climate change. But what we do is export the CO2.”

Oil drilling can be a politically contentious topic for Norwegians. A proposal to explore for oil near the Lofoten Islands, an ecologically sensitive cod breeding ground, was bitterly opposed by environmentalists and fishermen — and shelved until after national elections this fall.

On a recent bright, hot day — “This would be a great day in July, and it’s only May,” said Norway’s environment minister, Mr. Helgesen — the minister emphasized that his country was aggressively trying to curb demand for oil and gas. He drives an electric Volkswagen Golf. It can carry on for nearly 100 miles on a full charge, though in the bitter Norwegian winters, he concedes, it conks out much sooner.

Mr. Helgesen hopes there will soon be a pilot project with an electric-powered passenger plane to handle a short-distance flight in the north of the country. With stepped-up demand for electric vehicles, he says battery companies are finding Norway an attractive destination.

Norway has sought to reduce its carbon footprint in other ways, too. It has divested its enormous sovereign wealth fund from coal. It donates heavily to a global fund to save forests. It was one of the first countries to sign the Paris deal, alongside France itself.

Now, Mr. Helgesen says his country is facing the inevitable. “We are readily saying, ‘Oil and gas will not be the driver of our economy in the future,’” he argued. “While we are still drilling, we are identifying ways to build more legs for the Norwegian economy to stand on.”

That is an existential challenge for the country. The oil industry is politically powerful. Oil exports create wealth. Oil drilling creates jobs. Passing up opportunities in the shallow waters of the warming Arctic is difficult.

“We, as a country, we are petroholics,” said Thomas Nilsen, who runs a news site called The Independent Barents Observer. “We do understand that climate change is caused by burning fossil fuels. At the same time, we depend so much on the income from the oil. Just like alcoholics, we do want to stop, but we don’t know how.”