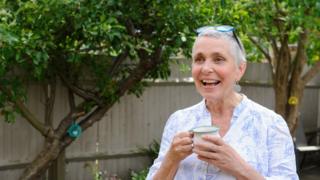 Some cancer sufferers who phone the Macmillan support line want to talk about death, and the process of dying.

But for 25 times as many patients, it’s not their health they want to discuss.

Macmillan’s research shows that most cancer sufferers are nearly £7,000 a year worse off because of the disease.

Many go overdrawn, or into debt. Some have even become homeless.

Banks meanwhile are being accused of doing very little to help such patients in their hour of need.

But now Lloyds Banking Group has decided to act. This week it begin offering some practical financial help.

‘I used up my braveness’

Tracy Jameson was forced to give up her job as an assistant head teacher in Oxford, after she was diagnosed with ovarian cancer last year.

After six months of sick leave, she went on to half pay.

As a single mother, her finances were stretched to the limit, and she used up all her £2,500 overdraft.

“I was having to take unexpected transport; suddenly none of my clothes fitted. Everything was literally falling off me because I had lost so much weight,” she told the BBC.

On occasions, money matters took a back seat.

Lloyds already has what it calls its “Moments of Truth” team, which helps customers suffering from a bereavement or other personal issues.

Members of the team have now been trained by Macmillan Cancer Support to deal with cancer patients as well.

By the end of the year there will be 100 such staff, based in call centres in Newport, Leeds and Dunfermline.

They have the power to refund charges and fees on current accounts, give budgetary help to customers, and organise repayment holidays on loans and mortgages.

Those banking with Halifax or Bank of Scotland are also eligible.

“We can give them a two-month holiday break on loan payments; mortgage payments similarly,” says Lee Jones, who runs the bank’s team in South Wales.

“We can look at what works for the customer.”

In Tracy’s case they offered her a mortgage holiday, and refunded all banking charges for six months. They also used her in a television advertisement to promote the service.

Tracy’s view of banks has changed as a result: “Banks are your financial partners; they are not your adversary.”

The move by Lloyds follows an example set by the much smaller Nationwide Building Society two years ago.

Since then it has dealt with nearly 2,000 cancer patients or their carers.

Many face extra expenses because of travelling to hospital, or having to give up work.

Like Lloyds, it can refund charges, and offer payment holidays.

“With cancer we are often looking at short-term measures, to try and get people through a particular period of treatment,” says Mandy Griffin, director of membership at Nationwide.

“It could be they’re having chemotherapy; it could be they are unable to work for a period; so a payment holiday is ideal in those circumstances.”

While Macmillan has welcomed the move by Lloyds and Nationwide, it believes there has not been enough progress in the banking industry as a whole.

It is asking the regulator, the Financial Conduct Authority (FCA), to impose a “duty of care” on the banks, to force them to do more.

“I’d like to see the whole banking sector take a look at the work we’re doing with Lloyds and Nationwide, and actually see the difference that it is making, day in and day out, to vulnerable customers,” says Dr Fran Woodard, an executive director at Macmillan.

UK Finance, which represents the High Street banks, said its members were keen to respond to individuals’ circumstances and needs “sympathetically and positively”.

However, no other bank has announced plans for anything similar.

But given that Lloyds has some 25 million customers, it is a challenge that rivals may not want to ignore.

After all, one in two people born since 1960 is likely to get cancer at some time in their lives.

A year on from her diagnosis, Tracy is doing OK, but will not be able to return to teaching.

“While you weren’t looking, cancer has bulldozed the rest of your life,” she says.

This story has been updated, in the light of further information