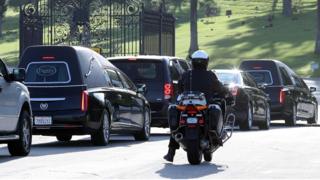 Carrie Fisher has been laid to rest alongside her mother Debbie Reynolds at a private service where her ashes were carried in an urn in the form of an outsize Prozac pill.

The US actress, best known for her role as Princess Leia in the Star Wars films, was frequently open about her experience of mental health issues.

“I felt it was where she would want to be,” her brother Todd Fisher said.

Following the joint funeral service at Forest Lawn Memorial Park in Hollywood Hills, Los Angeles, Todd Fisher said the giant pill in the shape of the anti-depressant drug was chosen as the urn for his sister’s ashes because it was one of Carrie’s “favourite possessions”.

“She loved it, and it was in her house, and Billie [Carrie Fisher’s daughter] and I felt it was where she would want to be,” he said.

He added that Fisher and her mother were now “together, and they will be together here and in heaven”.

Apart from Fisher’s cremation and the family’s choice of urn, no details were revealed about the private funeral ceremony.

Prozac (fluoxetine), a potent anti-depressant drug, was introduced in the US in 1988 and the UK the following year. Since then it has helped define how people think about mental illness.

How Prozac entered the lexicon

On Thursday, a joint memorial ceremony was held at Fisher’s estate in Coldwater Canyon, Los Angeles.

Among those in attendance were fellow actors Meryl Streep, Gwyneth Paltrow and Meg Ryan. Star Wars creator George Lucas and British actors Stephen Fry and Eric Idle were also guests at the ceremony.

Fisher died three days after suffering a cardiac arrest on a flight from London to Los Angeles in December.

Reynolds, who starred opposite Gene Kelly in the 1952 musical Singin’ in the Rain, died a day later after she was rushed to hospital with a suspected stroke.

Her son Todd said the stress of his sister’s death had been too much for Reynolds and in her last words, she had said she wanted to be with Carrie.