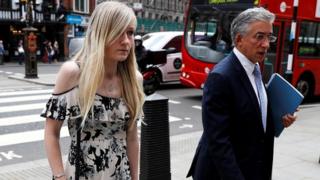 Moving Charlie Gard to a hospice to die would be the best option for the terminally-ill baby, a court has heard.

The 11-month-old’s parents had returned to the High Court to seek permission to take him home for “a few days of tranquillity outside the hospital”.

But Great Ormond Street Hospital (GOSH) said there were practical problems with that proposal, for example his ventilation equipment would not be able to fit through their front door.

The judge will rule on Wednesday.

Chris Gard and Connie Yates have pleaded for a paediatric intensive care doctor to come forward to help their son die at home.

“We promised Charlie every day we would take him home. It seems really upsetting after everything we’ve been through to deny us this,” Ms Yates said.

Grant Armstrong, representing the parents, told Mr Justice Francis that his clients’ “last wish is that Charlie dies at home”.

He suggested a portable ventilator and oxygen supply could be used but accused GOSH of “putting up obstacles”.

Lawyers for the hospital told the judge they “would like to be able to fulfil the parents’ wishes… if it is safe and practicable and in Charlie’s best interests”.

However, Katie Gollop QC, who leads the hospital’s legal team, said providing intensive care for Charlie away from a hospital was not simple.

Charlie’s condition requires air to be forced into his lungs. She said as far as the hospital was aware invasive ventilation was only provided in a hospital setting.

Ms Gollop said Charlie would need to be “monitored by an ITU trained nurse at all times, with an ITU doctor on call and close at hand”.

Such resources “cannot be provided by GOSH to Charlie at his parents’ home”, she said.

Mr Justice Francis said: “If going home can be achieved within reason then I would like to achieve that for them.”

But he said hospital bosses had suggested a “hospice option” instead that would give Charlie and his parents the space, privacy and protection they needed.

He said he would make a final decision, about whether Charlie can be taken home, at 14:00 BST on Wednesday.

Charlie’s parents, from Bedfont, west London, said they had been spending their “last precious moments” with their son.

Charlie has encephalomyopathic mitochondrial DNA depletion syndrome. He has brain damage and cannot move his arms or legs.

His parents had asked Mr Justice Francis to rule that their son should be allowed to undergo a trial of nucleoside therapy in New York, a move opposed by medics at GOSH who argued the treatment would be “futile”.

The Family Division of the High Court heard on Monday that US neurologist Professor Michio Hirano was no longer willing to offer the experimental therapy after he had seen the results of a new MRI scan.

In a statement to the High Court, GOSH said Professor Michio Hirano had not taken the opportunity to see Charlie until last week, despite being offered the chance to do so by the hospital in January.

The hospital said it was also concerned the professor had declared a financial interest in some of the treatment he had proposed prescribing for Charlie.