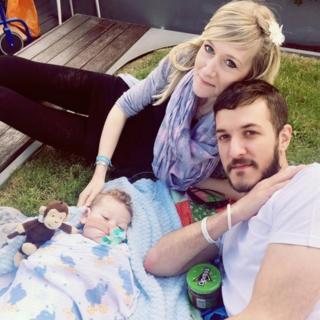 Charlie Gard’s rare disease has left him unable to cry

The parents of a terminally-ill baby have been given more time to put forward a legal case that he should be allowed to go to the US for treatment.

Life-support for Charlie Gard must continue until midnight on Monday, the European Court of Human Rights ruled.

The 10-month old has a rare genetic condition and brain damage, and doctors want to stop his life support.

The Strasbourg court made the interim ruling pending a full legal application by the family’s lawyers.

His parents launched their latest challenge after losing a UK Supreme Court appeal.

Charlie has been in intensive care since October last year. He has mitochondrial depletion syndrome, a rare disorder that affects the genetic building blocks that give energy to cells.

Specialists said therapy proposed by a doctor in the US was experimental and would not help.

A High Court judge in April ruled against a trip to America and in favour of Great Ormond Street doctors.

Mr Justice Francis concluded that life support treatment should end and said Charlie should be allowed to die with dignity.

Three Court of Appeal judges upheld that ruling in May and three Supreme Court justices on Thursday dismissed a further challenge by the couple.

On Monday, parents Chris Gard and Connie Yates, from Bedfont, west London, shared a photo of Charlie with his eyes open.

Connie Yates posted the image on Facebook with the message “a picture speaks a thousand words”.