“These three friends will help you relax,” she quoted him as saying to Ms. Constand, who viewed him as a mentor.

“Trust, betrayal and the inability to consent. That is what this case is about,” she said. 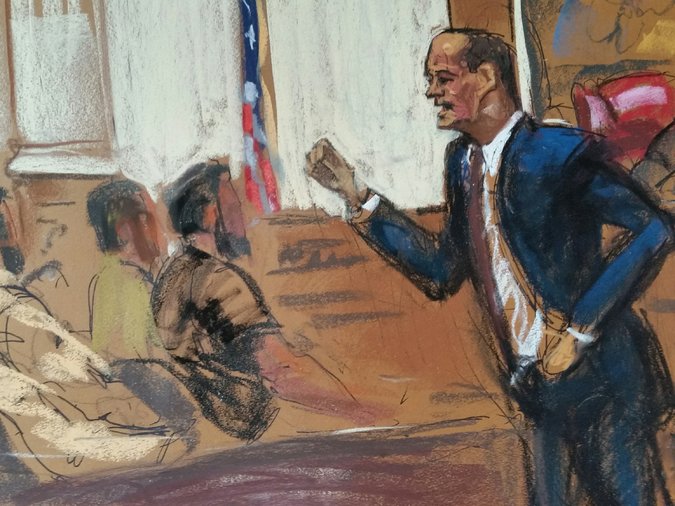 A sketch of Brian McMonagle, a lawyer for Bill Cosby, during his opening argument.

Why are we here, defense lawyer asked the jurors.

In his opening, Mr. Cosby’s lawyer, Brian McMonagle, attacked Ms. Constand’s credibility, pointing out that a former district attorney in the same county had decided against bringing charges in 2005.

“They saw there was no evidence to bring a prosecution then,” he said. “So why are we here?”

Mr. McMonagle cited what he characterized as inconsistencies in her statements to the police about the timing of events, about numerous meetings with him before the incident, and about her continued contact with him afterward, including a trip with her parents to see him perform at a resort outside Toronto. In particular, Mr. McMonagle talked of phone records, obtained by the prosecutors in 2005, that he said showed that Ms. Constand called Mr. Cosby 53 times after the incident, yet told police initially, he said, that she had not tried to contact him. At times, the lawyer said, the conversations lasted a half an hour or more. “Her story unravels,” he said.

Discrepancies in the accounts of sexual assault victims are not uncommon, according to experts. Ms. Feden addressed the phone contact by saying that Ms. Constand had continued to work at Temple, where Mr. Cosby was a powerful alumnus, and that in other instances, bottled up inside, she had repressed what had happened to her.

The prosecutor cited a phone call between Mr. Cosby and Ms. Constand’s mother, Gianna, who is scheduled to testify, in which he apologized and offered to fly her to Florida and pay for some schooling.

Mr. McMonagle addressed Mr. Cosby’s acknowledgement of the quaaludes, but dismissed the point, saying his use of them had been decades ago and had been with consenting women

Touching upon Mr. Cosby’s affairs and the death of his son, he said: “You see a comedian who made us smile, somebody may see a flawed husband whose infidelities made him vulnerable to these accusations. Some of you will look over there and see a man and see someone who has seen greatness and someone who has suffered unendurable personal tragedy. I hope you will see just a citizen, just someone who is there.”

The case has taken 13 years to make it to trial.

The trial represents the end of a long saga, and follows months of courtroom struggles by Mr. Cosby to have the charges — three counts of aggravated indecent assault filed in December 2015 — thrown out.

Mr. Cosby met Ms. Constand in November 2002 when he attended a basketball game at Temple. Ms. Constand, who had been a high school basketball star in Canada, was the director of operations for the Temple women’s team.

Cosby arrives with one of his TV daughters.

Mr. Cosby, in a dark suit, arrived at the court house at 8:38 a.m. He appeared relaxed and jovial and was helped out of a black SUV by two aides. Carrying a wooden cane in his right hand, he walked briskly into the courthouse, accompanied by Keshia Knight Pulliam, the actress who had played a daughter of Mr. Cosby on “The Cosby Show.”

“Truth happens here,” she told a reporter at the courthouse, not far from Philadelphia. Mr. Cosby did not respond to shouted questions from reporters.

Camille Cosby, Mr. Cosby’s wife of 53 years, was not in the courtroom for the morning session. It’s not clear whether she will be there to support him.

By 7 a.m., more than two hours before the trial was to start, about 15 people were in line for the public seats in the courtroom. Third in line was David Fulmer, 57, from Fort Washington, Pa., who said he had been in line since 2:45 a.m. “There are all these allegations against him and it’s hard to reconcile seeing him in all these different roles,” Mr. Fulmer said. “He was called America’s Dad and now he is being accused by 50 or 60 women.”

During the morning two of those accusers, Victoria Valentino and Therese Serignese, waited on the steps outside, hoping to get in.

“We are here to stand witness in support of Andrea Constand, in solidarity,” said Ms. Valentino, who had flown in from Los Angeles.

Ms. Valentino said they had booked hotel rooms for the week. Ms. Serignese could not comment because she is involved in a civil suit against Mr. Cosby. The lawyers Gloria Allred and Joseph Cammarata, who represent some of the female accusers, sat nearby in the packed courtroom.

Cosby’s legacy is among the matters to be decided.

Also present in the courtroom for many observers, of course, will be the memory of the man Mr. Cosby once was — the man behind Fat Albert and Dr. Cliff Huxtable in “The Cosby Show,” who also became something of a scold later in his life with his criticism of single motherhood and low-slung pants.

Indeed, Mr. Cosby’s celebrity and the high-profile nature of the case was apparent in Judge Steven T. O’Neill’s instructions to the jurors. “You are not to read, or listen or watch anything about the case,” he said, and he warned them about making any contact with others about the case.

“You can’t even discuss the case with members of your own family,” he added.

One of the other female accusers will also testify.

The dozens of other women who have come forward in recent years to say Mr. Cosby also assaulted them will not be testifying at the two-week trial. Ms. Constand’s complaint is the only one that has attracted criminal charges. For the many others, the statute of limitation had run out — although they may see a conviction as a vindication for themselves.

Judge O’Neill, though, has allowed prosecutors to introduce one of the other accusers to give her story to demonstrate a pattern in Mr. Cosby’s behavior. The woman, identified only as Kacey, says she was drugged and assaulted by Mr. Cosby in 1996.

Mr. McMonagle said legal notes from a worker’s compensation action she brought in 1996 would show that, while she claimed sexual harassment by Mr. Cosby, she had not accused him of sexual assault.

“At no time was she forced to have sex and when she said no, he said O.K.,” he said.