Home Lifestyle Art Critic's Notebook: For Migrants Headed North, the Things They Carried to the...

In the 1990s, the United States cracked down hard on immigration from Mexico. The Clinton administration beefed up on patrols and erected walls near border towns like Nogales to create, at least in the public eye, the impression that the problem was contained, at a time when Republicans in Congress were preparing immigration-control legislation. 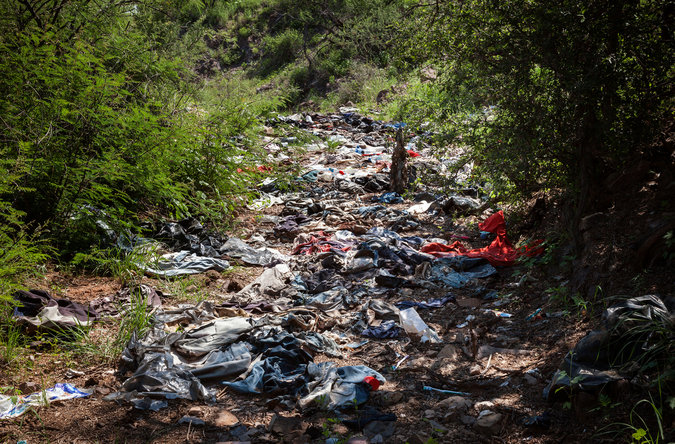 A result of this show of power, in the opinion of Mr. De León and other advocates for immigrants, was to push determined border crossers out into rural areas where walls ended and the desert began. He characterizes this policing strategy, known as “prevention through deterrence,” as a form of passive violence, funneling migrants into inhospitable terrain, where nature would do the dirty work of finishing some of them off. The Parsons exhibition, organized by Amanda Krugliak, an artist, and Richard Barnes, a photographer, with help from Mr. De León, is a document and an indictment of that policy.

Mr. De León’s argument is not one shared by the many Americans who approve of deterrents to illegal immigration. A record number of illegal immigrants — some three million — were deported during the Obama administration, and nearly two million by his predecessor, George W. Bush. The Trump administration last month released a far-reaching plan to arrest and deport vast numbers of unauthorized immigrants.

The Parsons exhibition is essentially a display of relics. A long gallery wall is encrusted with hundreds of retrieved, dirt-caked backpacks of the kind seen in the entrance video. As if from inside the packs, taped voices emerge of migrants recounting desert ordeals. The Chinese artist Ai Weiwei has done similar work but without the dense supporting context.

Dozens of small personal items are preserved in photographs: eyeglasses, dentures, medication vials, toiletries, letters, rosaries, prayer cards with pictures of the Virgin of Guadalupe, all stored in transparent plastic bags. The objects that were found with the bodies of desert border-crossers and are part of an archive kept by a nonprofit group in Tucson called the Colibrí Center for Human Rights formed to locate the next of kin of dead or missing migrants.

In 2012, on a Sonoran research trip, Mr. De León and a group of his students came across the body of a young, and at the time, unidentified Ecuadorean woman who had tried to make the crossing and failed. In his book he writes about the wrenching effects of the discovery, particularly on his students, some of whom, in her memory, later tattooed the GPS coordinates of the spot where she was found onto their bodies.

Mr. Barnes photographed the tattoos, and the bagged personal effects, and the images in show’s video. You could debate whether the resulting images qualify as art or as scientific data. My own definition of art is broad. Is the material in question interesting to look at? Has it been made interesting to think about? Is it being shown in an “art” context? If the answers are “yes,” then art is what you have. And it can be particularly powerful when it coincides with red-alert political realities.

A picture credit with an earlier version of this article misspelled the last name of a photographer. He is Garrett Carroll, not Carrol.