Almost every song here arrives at a slightly different musical angle. “Break Your Heart” could be a Chainsmokers arena, E.D.M. anthem, and “All We Ever Wanted” sounds indebted to Fergie. That they all cohere is because of Ms. Lovelis’s convincing voice, and the chipper tautness of the rest of the band: Casey Moreta on guitar, Miranda Miller on keys, Iain Shipp on bass and Nia Lovelis, Rena’s sister, on drums.

The album is also expertly produced by Julian Bunetta, best known for his work with One Direction, which also nodded at various genres without drowning that group in any particular one. (Hey Violet’s prior incarnation was called Cherri Bomb, and it released one uncommitted hard-rock album on Hollywood Records.)

On “O.D.D.,” he strips the band down to an acoustic core and plants Rena Lovelis in Dido territory for the album’s most affecting and most inward-looking song: “I’m the girl in the back of the class/blank stare, don’t care, don’t ask.” But Ms. Lovelis’s version of outsiderdom is, in the main, decidedly optimistic. She is ruthless in her takedowns, and has a keen eye for how young men try to invent themselves, and fall short. On one song, with a dismissive title that can’t be printed here, she provides a road map for how to unmask a pretty boy’s true character:

Here, Ms. Lovelis is gleeful, using her immaturity against his. It’s a theme that appears often on a recent album by another female-fronted act, “Bop City 2: TerroRising” by Terror Jr, which feels like an irresponsible older sister to Hey Violet’s “From the Outside.” 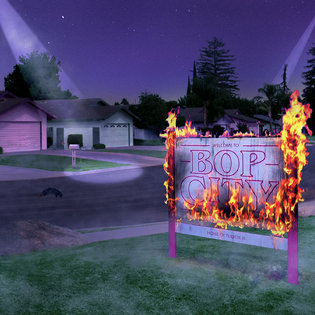 The album cover for “Bop City 2: TerroRising,” from the female-fronted Terror Jr.

Terror Jr is a trio — two producers, Felix Snow and David Benjamin Singer-Vine, and a singer, Lisa Terror, whose real identity has been kept secret thus far. (A label publicist declined to provide the name, saying it would be revealed in short order. Ms. Terror, the spokeswoman did allow, is in her mid-20s.) This group is more dance-floor-oriented than Hey Violet — a handful of the songs explicitly nod to “Where Are Ü Now,” the Justin Bieber, Diplo and Skrillex hit of 2015.

“Bop City 2: TerroRising” is exceedingly well produced, if derivative. Take “Dead Girl Walking,” which matches heartbeart-thick pulses with soft jazz-soul and heavy vocal decay, or “Personal,” an electro-pop thumper that, rather than explode at the hook, instead exhales into something unerringly breezy.

Ms. Terror is essential here. She has a saccharine sweet voice that carries a good deal of power, and she manages to at least partly redeem some lyrics that could only have been concocted in a late-night Mad Libs studio session (though not this gobstopper, on “Heartbreaks”: “Replaces roses with Cosby double-doses/Put Omarosa on a roller coaster without any lotion/Nick Cannon in a room with Steve Bannon.”)

If Ms. Lovelis is a cool girl on the fringes, Ms. Terror might be the person who gives her grief, or the person she grows up to be. Most of Terror Jr’s songs are joyfully vapid, but in the middle of the album is “Terrible,” which is joltingly raw. Here, Ms. Terror allows herself to come down from all the highs she’s chasing elsewhere.

“I’m so terrible, come pick me off the floor,” she sings with arresting clarity. “Unrepairable, can’t find an open door.”

And just like that, the lights seem to go dark — even someone who seems to be a glib insider can be an outsider, too.

Correction: July 11, 2017 A picture on Wednesday with a Critic’s Notebook article about the pop groups Hey Violet and Terror Jr was published in error. It showed Terror Jr’s 2016 album, “Bop City” — not the new album, “Bop City 2: TerroRising,” which was the focus of the article.