Ms. Schutz’s painting is not the only work of art inspired by the lynching of Till: There’s a ballad that Bob Dylan wrote, and performed in 1962, titled “The Death of Emmett Till,” released belatedly in 2010.

Some crossovers have been met with historic hostility. Among the most intense was the condemnation of William Styron’s “The Confessions of Nat Turner” 50 years ago by African-American writers. In “William Styron’s Nat Turner: Ten Black Writers Respond,” the contributors charged that Styron furthered numerous racial myths, stereotypes and clichés. Since then, Styron’s Pulitzer-Prize winning novel and the debate it unleashed have come to be seen as an important turning point for writers of black history, and the confrontation, as The New York Times Book Review wrote in 2008, “helped shatter the idea that there can or should be one version of ‘how slavery was.’”

Those who call for the removal of Ms. Schutz’s painting today seem to align themselves with black artists who in 1997 started a letter-writing campaign against what they considered the negative stereotypes of blacks in the early work of Kara Walker, the African-American artist known for her mercilessly Swiftian portrayals of antebellum plantation life. They also appear to side with Roman Catholics who in 1999, led by then Mayor Rudolph W. Giuliani, protested a painting at the Brooklyn Museum by the British artist Chris Ofili. It depicted the Madonna and Child as black on a surface embellished with small cutouts from pornographic magazines and a few pieces of tennis-ball-size elephant dung, heavily varnished and decorated with beads. 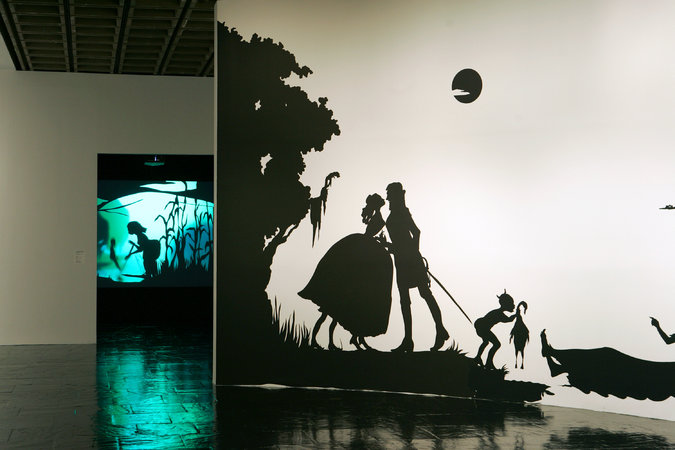 A view of Kara Walker’s installation “My Complement, My Enemy, My Oppressor, My Love,” at the Whitney Museum of American Art in 2007.

Over time, artists have periodically depicted or evoked lynchings, but the injured black body is a subject or image that black artists and writers have increasingly sought to protect from misuse, especially by those who are not black. This debate flared up in 2015 when, in a reading at Brown University, the poet and performance artist Kenneth Goldsmith — most of whose work is based on appropriation, sometimes of violent deaths — read as a poem a slightly rearranged version of the autopsy report of Michael Brown, the black 18-year-old shot and killed by a white police officer in Ferguson, Mo. Mr. Goldsmith was reviled on Twitter, accused of exploiting this material.

For a moment, Ms. Black’s letter about the Schutz painting created the impression that African-American opinion on this issue was monolithic. It is not. Antwaun Sargent posted a balanced editorial on artsy.com that linked to a short, blunt Facebook statement by the artist Clifford Owens. It read in part: “I don’t know anything about Hannah Black, or the artists who’ve co-signed her breezy and bitter letter, but I’m not down with artists who censor artists.”

On Thursday, Ms. Walker posted a cryptic message on Instagram that seemed guided by her own experiences. She stood up for Ms. Schutz’s painting without making great claims for it or reprimanding the protesters.

“The history of painting is full of graphic violence and narratives that don’t necessarily belong to the artists own life,” Ms. Walker wrote. She concluded that an artwork can be generative regardless of how it offends or falls short, giving “rise to deeper inquiries and better art. It can only do this when it is seen.”

Once released into the public sphere, images proceed under their own power and, in a free society, they will be used by anyone drawn to them, in ways that will be judged effective, inconsequential or egregious. But artists don’t ask permission.

Ms. Schutz has said she painted “Open Casket” out of sympathy for the pain endured by Till’s mother, Mamie Till Mobley, and the label at the Whitney has been adjusted to take this into account. In an email on Monday, Ms. Schutz wrote: “The photograph of him in his casket is almost impossible to look at. In making the painting, I relied more on listening to Mamie Till’s verbal account of seeing her son, which oscillates between memory and observation.”

But Ms. Schutz has always focused her art on physical suffering expressed by traumatized bodies and skin. Occasionally, the body has been black — as in her painting of Michael Jackson on an autopsy table — but it is usually white. Her subjects include Terri Schiavo on life support; George Washington as a kind of monster with overgrown wooden teeth; and a portrait of Ukraine’s former president Viktor A. Yushchenko, his face disfigured by poison. Most ambitious is the enormous “Presentation,” which shows two naked figures lying on a table being tormented and sliced up by a people in a crowd.

In a brief email exchange on Sunday, Ms. Schutz said that while making “Presentation” in 2005 she “was thinking about bodies not being seen coming home from Iraq.” She was referring to the longtime military ban, lifted in 2009, on photographing flag-draped coffins of American soldiers killed in the wars in Iraq and Afghanistan.

Themes of race and violence figure in art throughout this Biennial, including a painting by the black artist Henry Taylor, “The Times Thay Aint a Changing Fast Enough!” It depicts the fatal police shooting of Philando Castile.

Some might say the events and their depictions are apples and oranges. Mr. Castile was not brutally disfigured. Till’s torture more than 60 years ago, and his image, have become a nexus of inexpressible pain and anger for generations of Americans.

But by remaking these tragic images as paintings, both artists have given them a monumentality and a hand-wrought physicality that photographs generally do not attain. They have made them more present while keeping some distance. Mr. Taylor’s Castile has the noble face of a Greek statue. Ms. Schutz has been faulted for “abstracting” Till’s gruesome wounds, yet her sliding brushwork guides our eyes away from them, suggesting a kind of shocked visual reflex.

But perhaps most important, the paintings by Mr. Taylor and Ms. Schutz share an all-too-American subject, that of hateful, corrosive white racism. Who owns that?

The Schutz painting and the debate around it are already a historical unit, one that seems new to the art world, and one that will change things. Unlike the Styron controversy, it has unfolded on the internet at warp speed with thousands of people arguing about it almost in real time. Unlike Mr. Goldsmith’s poem, the cause of the furor is not ephemeral; the painting has a kind of equal weight with the debate. They are each in their own way extremely present, for people to consider going forward. “Open Casket” will not be destroyed but by now it is also beyond destruction.