Home Lifestyle Art Critic's Notebook: The Drag Queen Overshares, but the Guru Has Something to...

“Miss Blanche” works best as a vehicle for Mr. Rooney, who played Lucy Brown in the 2006 Broadway revival of “The Threepenny Opera” and the diva Dionne Salon in the cult musical “Bedbugs!!!” (which originated at the same festival, now in its 13th year.) He is particularly comfortable portraying bittersweet sexual ambiguity and androgyny, and his vocal agility is the show’s greatest asset. 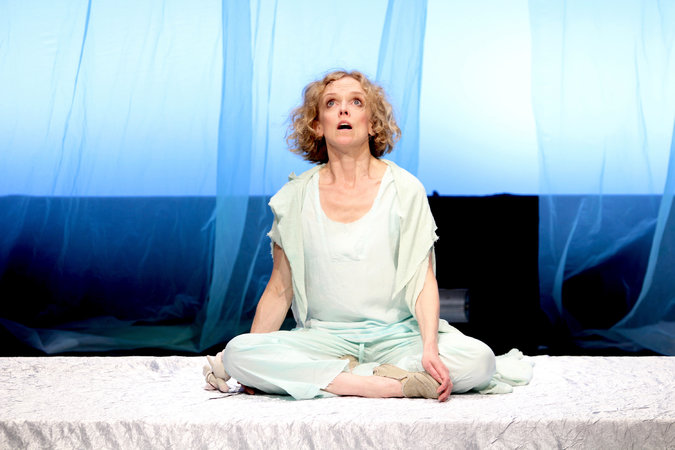 Nancy Anderson in “The Fourth Messenger,” a musical by Tanya Shaffer and Vienna Teng.

Similarly, Nancy Anderson’s performance is the highlight of Tanya Shaffer and Vienna Teng’s “The Fourth Messenger,” which is having its New York premiere during the festival’s opening week.

Sounding a bit like Bernadette Peters, Ms. Anderson (“The Pen”) projects a sense of steel-girded fragility that works wonder for her role as Mama Sid, a “world-famous guru” whose saintliness may be too good to be genuine. At least that’s what the cub investigative reporter Raina (Samia Mounts) thinks. To expose the potential fraud, Raina goes undercover at Sid’s retreat — it’s apparently easier to find a last-minute spot there than in a coveted SoulCycle class.

Sid’s name is a nod to the Buddha’s, Siddhartha Gautama, and her drawn-out back story echoes the Buddha’s path to enlightenment. The piece is interested in the way high-minded principles can run against the practical realities of human relationships, and contrasts how a woman could be an accomplished spiritual mother to many while failing as an actual mother of one.

Unfortunately, Matt August’s staging and Ms. Shaffer’s book and lyrics are less evocative and less witty than they need to be — Ms. Shaffer flirts with satire in some of the retreat scenes, only to hastily pull back. Ms. Teng, a singer-songwriter of standing who also contributed lyrics, fares better with the music, even if Sid gets all the best songs. Maybe it’s because they are closest to Ms. Teng’s folk-pop wheelhouse; tellingly, she took on the role in a 2015 album of the show.

Identity receives a much more lighthearted treatment in “Night Tide,” which asks not who the mysterious Mora is, but what. The show is based on a 1961 film, produced by the B-movie maven Roger Corman, which The New York Times described as “an eerily poetic mood piece.” But if there is a mood in Taylor Tash and Nathania Wibowo’s musical, it is broadly goofy rather than unsettling, more “Gidget” than fidget.

Looking like Anna Magnani by way of Mykonos — it’s this kind of show — Mora (Tara Martinez) plays a mermaid in one of the attractions on a beachside boardwalk. Johnny (Patrick Dunn), a sailor on leave, immediately falls for her.

Why exactly? Maybe it’s that she is so grimly literal about everything. Maybe it’s the odd faces she makes, the sideways glances she shoots at random moments. Or maybe it’s that nobody can tell the difference between a mermaid and a siren. Johnny is perplexed, and so is the audience.