At the center of the installation is the slant-top Walden desk, on first-time loan from the Concord Museum in Massachusetts. In a sense, the whole show fans out from it. Thoreau bought the desk soon after graduating from Harvard, when he and his older brother, John, opened a school near their home in Concord. When the school abruptly closed — John died of tetanus at 26 after nicking himself with a razor — Thoreau kept the desk. 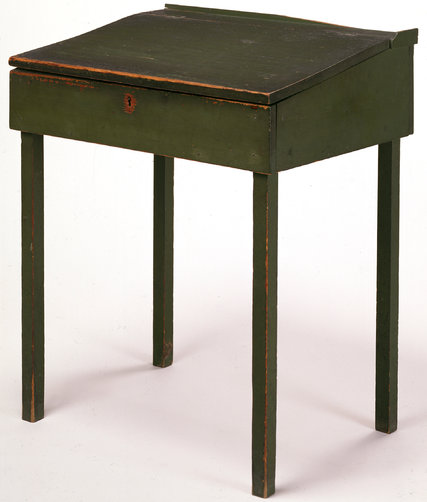 Thoreau’s desk, made of Eastern white pine and painted green, from around 1838.

He probably used it as a drafting table when he took up work as a land surveyor. (His protractor and compass are on display.) It almost certainly served as a reading station for Thoreau the perpetual student, poring over Hindu scriptures, ornithological guides and philosophical tracts by his neighbor, mentor and frenemy, Ralph Waldo Emerson. And it was essential equipment for the full-time writer he became, privately as the lifelong keeper of a daily journal, and publicly as a lecturer and essayist.

The show, organized by Christine Nelson of the Morgan and David Wood of the Concord Museum, is divided into sections corresponding to facets of Thoreau’s identity — student, worker, reader, writer — using the journal as the binding thread, which the Morgan is ideally positioned to do: Almost all the surviving journals, about 40 handwritten volumes, are in its permanent collection.

They constitute one of New York’s great manuscript treasures and are the most direct and absorbing way to approach Thoreau himself. Several open volumes appear in the show, with passages keyed to events in the writer’s life. Through their words, a drama builds and a personality emerges, one surprisingly different from the antisocial and self-denying Thoreau of modern legend.

The writer is, for one thing, a sensualist, responding to physical stimuli — light, scent, taste — “as if I touched the wires of a battery.” He’s superalert to sound: wind, ice cracking, energy humming in telegraph lines. He knows the music of birds, the “sonorous quavering” of geese overhead, the song of the wood thrush and vesper sparrow. And he makes music of his own, on a flute that had belonged to his brother (it’s in the show), which he delighted in playing outdoors.

Far from being a recluse, Thoreau spent much of his time with people, often seeking them out. He had problems with some: with cocksure authorities; with self-promoters (a brief stint in Manhattan trying to break into publishing was a disaster); and with uptight members of the Concord bourgeoisie. He froze when it came to small talk (Hawthorne had the same disability), and prolonged socializing with company not of his choosing left him drained. But he was a devoted family member; a reliable friend (the prickly Emerson leaned on him in times of personal crisis); and a favorite of children, with whom he spent much time.

If his regard for the human race deteriorated as he grew older, there were reasons. He watched with alarm and disgust as industrial wealth created a new socio-economic elite, and America’s imperialist appetites strengthened. As his love of the natural world turned acute — he came to believe trees had souls — he moved toward a zero-tolerance stance on human predation: on the wanton hunting of animals, on laying waste to the land.

“Is our life innocent enough?” he asked. No. “Do we live inhumanely — toward man or beast — in thought or act?” Regrettably, yes.

His sympathies were with the outcast, the downtrodden: the Irish laborers shunted to the outskirts of Concord, the dispossessed Native Americans he met on his travels. His journal is marred by ethnic stereotypes, amounting to slurs, common to his time, but his expression of empathy feels gut-level genuine. In the case of Native Americans, it produced thousands of pages of anthropological research.

The Fugitive Slave Act of 1850, securing the return of runaways, tipped him over the edge from outrage to activism, though his upbringing had primed him to make the move. His mother was a founder of the Concord Female Anti-Slavery Society; his older sister, Helen, was a friend of Frederick Douglass; the family home, where, aside from two years at Walden, he lived till he died, was a stop on the Underground Railroad to Canada. Given this context, his night in jail, in 1846, for refusing to pay taxes to a slavery-supporting government was a less sensational event than history has tried to make it. (It’s nice, nonetheless, to see the lock and key from his jail cell in the show.)

Riskier actions came later, when in 1854 he delivered a furious antislavery speech while standing under a black-draped, upside-down American flag on a stage shared with Sojourner Truth. And he hit still harder in near-treasonous defense of the radical abolitionist John Brown in 1859. In both cases, he carefully culled ideas and words from the journal, the one place he let himself talk freely, experimentally and completely.

It took time to learn to do this, and you can see the process in action. In the earliest journal, dated 1837, the penmanship is crisp, the margins precise. By the time we come to the final volume, left half-empty at Thoreau’s death in 1862, the writing scrawls at a tilt to the very edges of the page — top, bottom and sides — as if the writer were afraid he would not have the time and space to fully express the “ever new self” that the journal-writing had given him access to.

After my early love, there was a long stretch when I put Thoreau down — literally. Didn’t read him. I became a city person. I was in a rush, or a mood, or a mess, and the Transcendentalists read too slow, sounded too preachy, felt too above it all. Recently, though, with a new Thoreau biography on the horizon (by Laura Dassow Walls, due out in July) and the Morgan show scheduled, I went back to him.

I ferreted out my slender old Walden copy of the journal and found Thoreau’s “ever new self” where I’d left him, and now, once again, so relatable! Here he is speaking out on “the baseness of politicians” and the plight of immigrants, insisting that black lives more than just matter, and that America will never rest until it begins — begins — to try to repair the damage it has done to its indigenous people.

There’s more. Why hadn’t I remembered, during the terrible years of the AIDS crisis, the tenderness of Thoreau’s nursing and the devastation he felt when people he loved, like John, sickened and died? And how could I have missed understanding that Thoreau’s love of nature was not Emersonian; it was, minus sainthood, Franciscan. “Of thee, O earth, are my bone and sinew made. To thee, O sun, am I a brother.”

I found evidence, again, that Thoreau could be cranky, misanthropic, a pain. This is old news. People forgave him, or didn’t. But how could I have missed his sweetness?

“When yesterday Sophia and I were rowing past Mr. Prichard’s land, where the river is bordered by a long row of elms and low willows, at 6 p.m., we heard a singular note of distress.” Thoreau, thinking a bird was in trouble, rowed to shore to help, then saw “a little black animal making haste to meet the boat. A young muskrat? A mink? No, it was a little dot of a kitten. Leaving its mewing, it came scrambling over the stones as fast as its weak legs would permit, straight to me. I took it up and dropped it into the boat, but while I was pushing off it ran the length of the boat to Sophia, who held it while we rowed homeward.”

This journal entry dates from May 1853, which would put it well along in the chronological arc that surrounds the green-painted desk in the show. By that point, you’ve already been through the better part of an instructive and generous life. And just by paying attention to it, you have indeed, like leaving a stone at Walden, added something to history: your own.

A Critic’s Notebook article on Friday about the exhibition “This Ever New Self: Thoreau and His Journal,” at the Morgan Library & Museum, misstated the surname of a curator of the exhibition. He is David Wood, not Cook.