Ms. Benton soldiered on through several floors of the Biennial, rarely pausing until she arrived at a room hung with photographs by Deana Lawson and paintings by Henry Taylor. She stopped in front of a picture that showed four young men, shirtless and throwing gang signs. 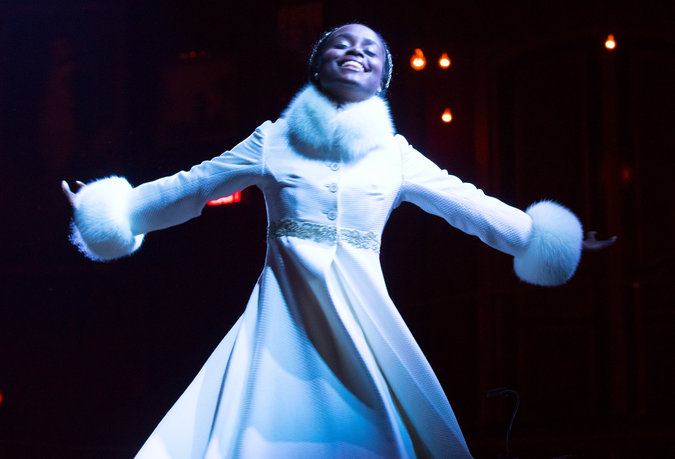 Denée Benton as Natasha in “Natasha, Pierre & the Great Comet of 1812” at the Imperial Theater.

“This is thrilling,” she said. She hadn’t expected to find black subjects like these here, she said. She wanted to give them her full attention.

Ms. Benton grew up in Central Florida, first in a small town, then in an Orlando suburb, a creative, daydreaming, spotlight-chasing kid. Any opportunity to act “made me anxious and excited and yearn-y,” she said. “It was a feeling kind of like you have a crush on someone.”

That crush continued, but as she got older, Ms. Benton noticed that African-American women rarely appeared in the musicals and romantic comedies she loved. (A happy exception: the Rodgers and Hammerstein television movie “Cinderella” starring Whitney Houston and Brandy Norwood.) In the films and TV shows she watched, “Women who look like me and sound like me don’t really seem to excel,” she said.

This made her doubt that she could have a career as an actor, and it dented her self-esteem, as did comments from mostly white classmates, like “Oh, you’re pretty for a black girl” and “He’s interested in you, but he doesn’t really like black girls,” she recalled.

“Every black woman that I’ve spoken to has gone through that severe journey of self-loathing,” she said. Ms. Benton questioned her looks and her voice, a deft soprano that doesn’t lend itself to “this canon of black girl songs you’re supposed to be able to sing,” she said. She nearly gave herself vocal damage trying for a gospel sound.

But a calling is a calling, and Ms. Benton answered hers, entering scholarship competitions and arts Olympiads until she was accepted into the acting conservatory at Carnegie Mellon. Although she continued to worry that she was “not black enough for the black people or white enough for the white people, or not really anything for anyone,” she landed the lead female role in the second national tour of “The Book of Mormon” even before she graduated, and “UnREAL” and “Great Comet,” Dave Malloy’s musical adaptation of a hunk of “War and Peace,” not long after.

When Ms. Benton got the call to audition for “Great Comet,” in a role that Phillipa Soo of “Hamilton” had originated Off Broadway, she wasn’t sure she was what the producers were looking for. But she fell for the score and began to hope. “It was scary to let myself want it,” she said.

The production team struggled to find an actress with the requisite mischief, beauty and a voice that can “be the classical soprano and also do the nasty, biting, belty thing,” Mr. Malloy said.

When Ms. Benton, who had previously auditioned for Mr. Malloy’s “Preludes,” came in, “she had so exactly that sense of humor and that grace and that preternatural intuition we were looking for,” the show’s director, Rachel Chavkin, said. “She just smashed it.”

Her co-stars think Ms. Benton is still smashing it. “She’s so expressive,” said Josh Groban, who plays Natasha’s defender. “She just gives you so much.” And Lucas Steele, who plays the cad she falls for, described her as “a dream to be onstage with. She’s always present and so alive.”

Ms. Benton’s experience is a little less dreamy. Natasha is a role, she said, “that kind of demands greatness from you, vocally, physically, spiritually.” The wide-ranging score, the outsize emotions and the stairs in Mimi Lien’s set design take a lot out of her. “Sometimes it takes a lot of prayer because you don’t feel strong enough.”

But strength isn’t a quality Ms. Benton seems to lack. You can see it in her vivacious, headstrong Natasha and also in Ruby, Ms. Benton’s “UnREAL” character, who shows up poolside in an “I Can’t Breathe” T-shirt instead of a bikini and still turns heads.

As Stacy Rukeyser, the “UnREAL” showrunner, put it in a telephone conversation, the producers wanted “somebody who was incredibly smart and strong,” somebody who had “this inner beauty as well as this outer beauty.”

Ms. Benton hadn’t thought that a character like Ruby, “with her kinky curls and her passion and her goals,” could be the center of a romance. When she read the scripts, she burst into tears, she said, “because of all of those years of feeling like I wasn’t good enough to be the love story.”

She spoke feelingly of an African-American teenage girl who came to “Great Comet” and confided to the show’s choreographer: “Denée was a princess up there. I didn’t know we could be princesses.” With that in mind, she inaugurated the “Black Princess Project,” using her Twitter feed to showcase royal women of color.

A young actress could be forgiven for keeping her social media feed upbeat and strictly apolitical during awards season. Instead, as Ms. Chavkin said, Ms. Benton talks “loudly and beautifully about issues of representation, about women’s rights.” Ms. Chavkin forwarded an affable email that Ms. Benton sent to the cast and crew in which she explained the origins of Cinco de Mayo as an anticolonialist celebration. “Powerful to know the reasons behind the mariachi music,” Ms. Benton wrote.

As she perched on a couch in the Whitney’s lobby, resting those aching feet, she acknowledged that there were days when she’d rather not be a standard-bearer. She misses going to a bodega she now avoids after an employee worried that she might shoplift and followed her around the store. (“They have kombucha! Why am I being punished for this?”) And she would like to watch HBO shows (“Girls,” “Game of Thrones”) without being troubled by issues of representation.

But then she thinks about her grandmothers, women who grew up in the Jim Crow South, she said, and the way the world has changed and needs to keep changing and how she can urge that change on. When she acts, she does it hoping to affect girls like she used to be, “who think that the world thinks they’re hideous.”

Will those girls get to see her win a Tony? That’s a tough one. Her category includes Bette Midler, Patti LuPone, Christine Ebersole and the “Miss Saigon” newcomer Eva Noblezada. “Competition’s stiff,” she said. “Bette and Patti, they’re queens, so we’ll see.” But she doesn’t think that anyone should count this countess out. “I am doing my absolute best,” she said. “I have a great speech to give if I get it.”