The project is Mr. Dixon’s moon shot for the future of furniture — the latest gamble from a college dropout turned designer who has become one of Britain’s foremost tastemakers.

Best known for lighting and furniture that flit between the bravely industrial and supremely elegant, including his iconic Screw side tables that resemble oversize automotive jacks and his pillowy Void pendant light that could be mistaken for an Anish Kapoor jelly bean sculpture, Mr. Dixon’s creations have typically appealed to a more rarefied and affluent clientele.

But in recent years, Mr. Dixon has emerged as a Terence Conran-like figure for a new generation, designing interiors for hotels and restaurants like the Mondrian London at Sea Containers; collectible furniture sold at high-end design fairs; an ever-expanding range of lighting and furniture; stores in London, New York and Los Angeles; and even home accessories like notebooks and scented dish soap.

“He’s one of the most successful designers in the world today who is actually self-trained,” said Stefan Lawrence, the founder of Twentieth, an influential Los Angeles store that carries cutting-edge contemporary design. “He never had a formal design education, and basically bootstrapped his way to the top.”

The fashion designer Paul Smith, who is among Mr. Dixon’s earliest clients and remains a close friend (he is the godfather of Mr. Dixon’s daughter), put it this way: “He understands the use of materials, the process of manufacturing and the importance of thinking about how something will ultimately be used.”

Mr. Dixon was born in Tunisia, where his father taught English, but was raised mainly in England after his family moved there when he was 4. With little patience for academia, he lasted just six months at the Chelsea College of Arts after high school, and channeled his energy into music. In the early 1980s, he played bass for the band Funkapolitan, which appeared on the BBC show “Top of the Pops,” opened for the Clash and recorded at Electric Lady Studios in New York.

His first flirtations with design came when he and a few partners started the London clubs Language Lab and Titanic, and he would weld sculptures on stage as experimental performance art. A broken arm from a motorcycle accident put an end to his music career, but the welding stuck.

“In the club world, I knew lots of people, and they would turn into hairdressers and photographers who would all need a little bit of metal welded,” Mr. Dixon said. “It was really through the joy of metalwork and resolving problems that I became a designer.” 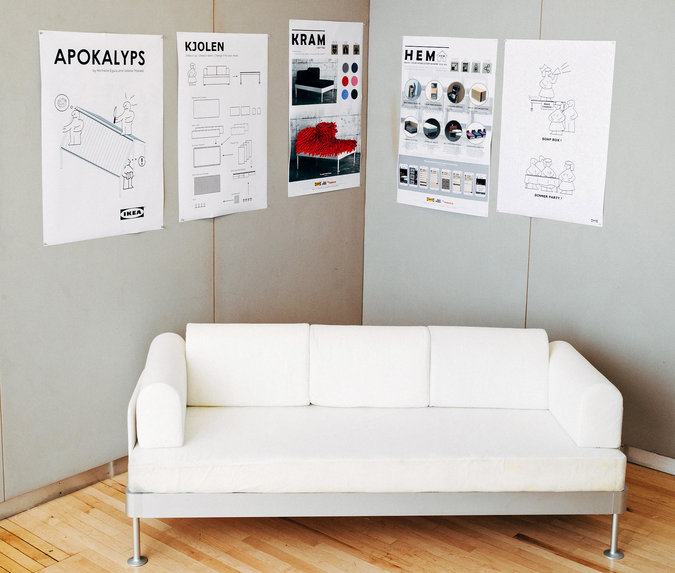 A prototype for Delaktig, Mr. Dixon’s new collaboration with Ikea.

His creations quickly turned more ambitious, and by 1985 he was transforming scrap metal into furniture. His Bull stool blended a skillet, ladles and bicycle forks into a vaguely neoclassical seat, while his S-Chair balanced a cobra-shaped metal frame, wrapped with rubber inner tubes, atop a Volkswagen Golf steering wheel.

Soon, Giulio Cappellini, the art director of the Italian furniture company Cappellini, heard about the iconoclastic young gun. “A good friend of mine, Franca Sozzani, the former editor of Italian Vogue, told me, ‘Oh, there’s some interesting artist you should go see the next time you go to London,’” Mr. Cappellini said. “So I went to see Tom and his laboratory, a very dark space where he was doing these strong metal pieces, like a chair on which you cannot sit.”

Impressed, Mr. Cappellini worked to put a number of Mr. Dixon’s designs into production, catapulting the designer’s name beyond Britain. Most successful was the S-Chair, which is now in the permanent collections of the Cooper Hewitt, Smithsonian Design Museum; the Museum of Modern Art; and the Victoria and Albert Museum.

“The S-Chair, which is a favorite of our curators, is rethinking a chair form — one continuous gesture,” said Cara McCarty, the curatorial director of the Cooper Hewitt. “He’s not a fussy designer, but he excels in the craft of making beautiful, enduring forms.”

As his design practice grew, Mr. Dixon remained a maverick in both design and business.

“The furniture industry tends to think in a very homogeneous way, with everyone repeating each other,” said Todd Bracher, a Brooklyn-based designer who worked for Mr. Dixon from 2003 to 2005, just as Mr. Dixon was getting his brand off the ground. “Somehow, Tom was able to cut through all that.”

The craze for warm metals like brass and copper in lighting can be traced back to Mr. Dixon’s fixtures from more than a decade ago, Mr. Bracher said, including his golden Mirror Ball, Copper Shade pendants and brass Beat lamps. “He was zigging while everyone else was zagging,” Mr. Bracher said. “He was using gold, brass and copper — all these metals that everyone was afraid of at the time. Everyone thought we were crazy.”

He also skewered norms as a businessman. Most designers license their creations to manufacturers and then get out of the way, but Mr. Dixon reveled in the production, marketing and selling of his products.

From 1998 to 2008, as head of design and then creative director of Habitat, the European housewares chain started by Mr. Conran, Mr. Dixon spearheaded projects like the VIP (Very Important Products) collection, which introduced collaborations with Daft Punk, Ewan McGregor, Helena Christensen, Manolo Blahnik and Carla Bruni.

As the creative director of the Finnish furniture company Artek from 2004 to 2009, Mr. Dixon oversaw the creation of the 2nd Cycle program, which bought back the company’s vintage pieces, authenticated them and then resold them as time-beaten treasures.

As the manufacturer of his own products, he sold a majority of his company to investors (a stake now owned by NEO Investment Partners). “I’m a minority owner in my own name, which is a familiar way of acting in the fashion business, but is most unusual in our game,” Mr. Dixon said.

He has even given away some of his products, like when he dumped 500 polystyrene chairs in Trafalgar Square during the 2006 London Design Festival in partnership with a packaging association, before copper-plating eight of them in a pricey limited edition the next year.

“He doesn’t march to anyone’s drum but his own,” said Bradford Shellhammer, the head of personalization and engagement at eBay. (He is also a singer in Mr. Dixon’s band Rough, which occasionally plays at design events). “He does what he wants.”

Given Mr. Dixon’s history of doing the unexpected, his collaboration with Ikea isn’t that shocking. What’s more surprising, perhaps, is the focus on longevity.

“Nobody wants to do throwaway objects — nobody,” said Marcus Engman, the head of design at Ikea, which began working with Mr. Dixon a year and half ago. “The thing that is a little bit nagging in people’s minds about mass production is that everything looks the same. But could you mass-produce uniqueness? That’s the perfect crime.”

To give it a push, Mr. Dixon and Ikea held workshops like the one at Parsons, where students developed concepts for accessories that would allow Delaktig to become a dining table with storage compartments; a foosball table; a protective shelter with flotation aids for natural disasters; a self-contained pet cemetery; and an all-in-one nursery unit with a mobile, crib, changing table and nursing pillows.

Mr. Dixon plans to make upscale components under his own brand, which may include marble side tables and headboards, Moroccan-style pillows, lamps and a kit for a curtained four-poster bed. “The measure of success is if you manage to get a whole ecosystem around this platform,” he said. “Then it takes on a life of its own.”

Ikea aims to start selling Delaktig next February, and Mr. Dixon hopes it will have a starting price of about $400.

Despite its grand ambitions, when Delaktig is shown in Milan next week, it will be only one part of Mr. Dixon’s presentation. As a sign of just how big a player he has become, he is creating a multifaceted destination at Teatro Manzoni, a yawning 842-seat theater and galleria of sumptuous 1950 Milanese style.

There, Mr. Dixon will offer film screenings, talks and a Johnnie Walker bar, and present his many creations in a series of shops, including a haberdashery with his first collection of pillows and throws, a chandelier store with his latest lighting collection, a perfumery of scented goods for the home and an antiques shop where his now classic designs will mix with other vintage goods.

He will also reintroduce a number of his earliest designs for Cappellini under his own brand, including the Pylon chair, a skeletal composition of metal wire inspired by power transmission towers and a new version of the S-Chair based on his first prototypes.