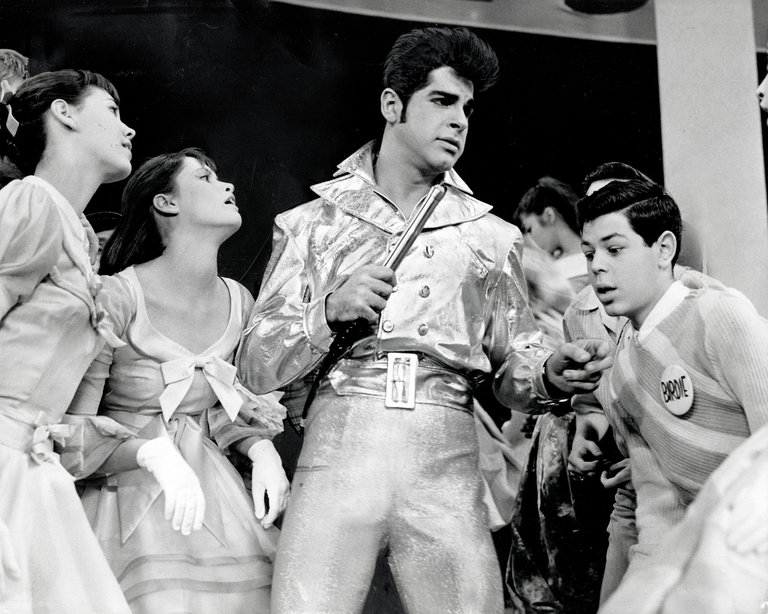 Dick Gautier, a comic actor best known for his Tony-nominated performance as a vain rock ’n’ roll star in the Broadway musical “Bye Bye Birdie” and his recurring role as a robot with a heart on the television show “Get Smart,” died on Friday in Arcadia, Calif. He was 85.

A spokesman, Harlan Boll, said the cause was pneumonia.

Mr. Gautier had the square-jawed good looks of a leading man. But he also had a wild sense of humor — he began his career as a stand-up comedian — and for more than 50 years he was primarily a scene-stealing supporting player on sitcoms.

His television credits included the occasional drama like “Marcus Welby, M.D.” and “Murder, She Wrote,” but comedy was his specialty. He was seen on “The Mary Tyler Moore Show,” “Bewitched,” “Happy Days,” “Gidget,” “The Love Boat” and countless other comedy shows. He was also a frequent guest on game shows, sometimes with his second wife, the actress Barbara Stuart.

His only leading role of note was as a decidedly unheroic Robin Hood on the sitcom “When Things Were Rotten,” created by Mel Brooks, in 1975. Critics liked the show’s anarchic humor, but ratings were low and it was canceled after 13 episodes. (When Mr. Brooks revisited the Robin Hood legend in 1993 in the feature film “Robin Hood: Men in Tights,” the part was played by Cary Elwes.)

Mr. Gautier was a successful nightclub comedian in New York in 1960 when he was cast in “Bye Bye Birdie,” which starred Dick Van Dyke as the orchestrator of an elaborate publicity stunt involving a singer modeled on Elvis Presley. Gower Champion, the show’s director, and Charles Strouse, who wrote the music, saw Mr. Gautier’s act, which included singing as well as comedy, at the Blue Angel in Manhattan and asked him to audition for the role of the singer, Conrad Birdie.

He was not interested at first, he told the show-business historian Kliph Nesteroff in 2014, because he did not like rock ’n’ roll: “I said to Charlie: ‘It’s not for me. I feel very inhibited and very intimidated by this whole Elvis thing because it’s not me.’ He said, ‘It’s a satire.’ Then I went, ‘Ohhhhh.’ When he said that, then I got it.”

“Bye Bye Birdie” was a hit, running for a year and a half and winning four Tonys, including best musical. Mr. Gautier’s performance, praised by Brooks Atkinson of The New York Times as “a good, unsubtle cartoon of hideous reality,” earned him a Tony nomination.

Mr. Gautier’s next high-profile role came in 1966, when he was cast as Hymie, a robot who is programmed to do evil but switches sides and befriends the bumbling spy Maxwell Smart (Don Adams), on “Get Smart,” the hit sitcom created by Mr. Brooks and Buck Henry. The character appeared in only six episodes but is fondly remembered by fans.

Richard Gautier was born on Oct. 30, 1931, in Culver City, Calif., to parents who worked in the movie industry — his father as a grip, his mother as a seamstress. He attended military school, began his show business career as a teenage singer and served in the Navy before trying stand-up comedy at the hungry i in San Francisco in the mid-1950s.

In his later years Mr. Gautier specialized in voice-over work on cartoon shows. He was heard but not seen on “The Transformers,” “The Smurfs,” “G.I. Joe” and many other series.

Although best known for his television work, Mr. Gautier also appeared onstage in touring productions of “The Music Man” and other shows, and in movies including “Divorce American Style” (1967) and “Fun With Dick and Jane” (1977).

He was also an accomplished caricaturist and the author or co-author of “The Art of Caricature,” “Actors as Artists” and other books.

Mr. Gautier was married and divorced three times. He is survived by three children, Chrissie, Randy and Denise, from his first marriage, to Beverly Hedman; four grandchildren; and five great-grandchildren. He and his third wife, Tess Hightower, a psychologist, had recently divorced.