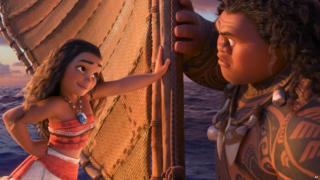 The film about a princess’s mythical journey in ancient Polynesia took an estimated $81.1m (£65.3m) on its debut.

Some observers have said that Moana and its merchandise are appropriating Pacific Island culture.

Disney withdrew a children’s costume promoting the film after activists branded it “brownface”, or mocking of their culture by stereotyping.

The costume, a full-body suit with brown skin, traditional tattoos, grass skirt and bone necklace, represented the character Maui, considered a demi-god and ancestor by many Polynesians.

Disney said it regretted any offence.

JK Rowling’s Fantastic Beasts and Where to Find Them fell to second on the US chart, taking $65.8m (£53m).

Kyle Davies, Paramount’s head of domestic distribution, said the film appealed to “older audiences” but noted those “don’t storm the theatres [on] weekend one”.

“I think they’re going to take their time,” he added.