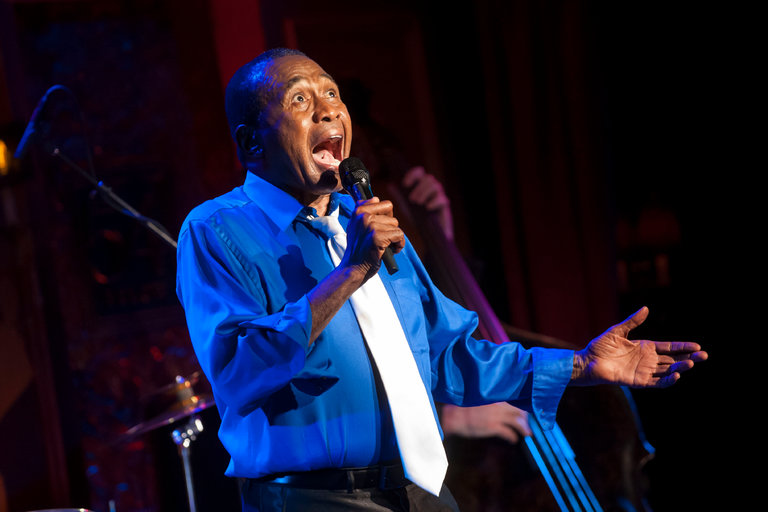 Ben Vereen performing in 2012. At the Concert for America on Friday in New York, Mr. Vereen sang “What a Wonderful World.”

For 150 minutes, no one mentioned Donald J. Trump.

Instead, a constellation of well-known Broadway performers gathered on Friday at the Town Hall auditorium in Manhattan to sing a collection of songs about love of country and hope for the future, offering a competing vision of America to the one they associate with the country’s new president, who had been inaugurated a few hours earlier.

Without a word of direct criticism, the diverse array of performers spoke of values they clearly believe are now under threat — equal protection for sexual and racial minorities, support for the poor, government aid to the arts — and raised money for groups supporting civil liberties, women’s health and environmental protection.

“It ain’t over yet,” a visibly choked up Ben Vereen repeatedly interpolated into the lyrics of “What a Wonderful World,” prompting a standing ovation. “We have no room for discouragement,” said Mr. Vereen, who won a Tony Award in 1973 as the Leading Player in “Pippin.” “Hope is all we’ve got.”

In sharp contrast to the occasionally violent demonstrations in Washington, and to many of the biting remarks offered by celebrities in Hollywood and on Broadway since the election, the gathering on Friday was striking for its emphasis on the importance of faith in the United States and optimism about its future. The entertainers insisted that the concert was not a protest but instead an effort to find a positive focus at a time when many of them felt despair.

To drive their point home, the concert opened with Kelli O’Hara, a 2015 Tony winner for “The King and I,” singing “A Cockeyed Optimist” (from “South Pacific”) and later featured an a cappella rendition of “America the Beautiful,” sung by Brian Stokes Mitchell, a 2000 Tony winner for “Kiss Me Kate.” Billy Porter, who won a 2013 Tony Award for “Kinky Boots,” emphasized the phrase “bless our homeland forever” as he sang a rendition of “Edelweiss.”

A few performers offered some pointed commentary. “We can’t have hate win,” said Rosie Perez, best known for her work on film. She spoke about growing up in poverty as she urged the country to continue helping low-income children. Lillias White, a 1997 Tony Winner for “The Life,” said, “This country is ours — it belongs to us — and we will not let the arts be destroyed in this country.” And one song, “I’m a Woman” from “Smokey Joe’s Cafe,” was sung in tribute to those participating in Saturday’s Women’s March on Washington.

The show, called the Concert for America, was organized by Seth Rudetsky, a Broadway talk show host and musician, and his husband, James Wesley. They said they intend to stage similar benefits monthly, in different cities across the country, to raise money for the N.A.A.C.P., the National Immigration Law Center, Planned Parenthood, the Sierra Club and the Southern Poverty Law Center.

“This Inauguration Day, many may be tempted to slip into a state of clinical depression,” Cornell W. Brooks, president of the N.A.A.C.P., told the crowd of about 1,500 in the auditorium and viewers watching online. “We, this day, with song and dance and performance, are consecrating this day with hope.”

Jessie Mueller, a 2014 Tony winner for “Beautiful,” was an early proponent of the concert.

“We’re performers, and we have this American art form, which is musical theater — is there a way we can use that to be a representation of what we hope the country is and what we hope it will be?” Ms. Mueller recalled thinking.

“I don’t see it as an act of protest at all,” she added, speaking in an interview before the concert. “In my mind, it was more about, if someone is feeling any lack of hope today and didn’t want to watch the news today, maybe they could come here and engage in a community coming together in hope and love and all the things we know the country to be.”