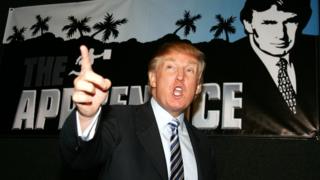 Donald Trump, pictured in 2006, has stepped down as host of The Apprentice

Donald Trump has denied that he will work on the new series of reality TV show Celebrity Apprentice after becoming US president.

It had been reported that he would continue to be an executive producer of the show he helped create.

He tweeted on Saturday that he would “devote zero time” to the new series, which will be hosted by actor and politician Arnold Schwarzenegger.

However, Mr Trump did reaffirm that he has a “big stake” in the show.

Mr Trump fronted the series, which is owned by MGM and aired by NBC, until 2015, when his political career took over.

There have been concerns about a conflict of interest because of The Apprentice’s advertising deals and because NBC also runs various news productions.

“I have NOTHING to do with The Apprentice except for fact that I conceived it with Mark B & have a big stake in it. Will devote ZERO TIME!” Mr Trump tweeted, referring to the show’s creator, television producer Mark Burnett.

He described the reports that he would be working on the programme during his presidency as “fake news”.

Mr Trump will be sworn in as US president on 20 January, 18 days after the new series begins.

Variety magazine, which first reported the story, had claimed he would be paid at least “in the low five-figures” per episode. MGM declined to comment on the financial arrangements.

Some observers have questioned whether the connection could affect the reporting on Mr Trump by NBC’s news division.

In June 2015, NBC said it had ended its business relationship with Mr Trump because of “derogatory statements” he made about immigrants during his presidential campaign.

On the links between the president-elect and The Apprentice, the liberal Media Matters blog wrote: “NBC will invite scepticism into how NBC and MSNBC can fairly cover the sitting president when there is a financial incentive to protect his reputation and the ratings of the Celebrity Apprentice.

“Furthermore, Trump and NBC should address the conflict of interest concerns raised by the fact advertisers may help to personally enrich President-elect Donald Trump by purchasing ads during Celebrity Apprentice.”

However, the new series was recorded in February, before NBC severed its ties with Mr Trump and before his election.

Mr Trump’s supporters have defended the president-elect, comparing his Apprentice credit to royalties received by Barack Obama from his books.

Mr Trump is due to hold a news conference next week outlining how he plans to leave his business “in total in order to fully focus on running the country”.