Patty Ris, who had by chance sat at Dr. Heimlich’s table in a dining hall, began eating a hamburger. “And the next thing I know, I could not breathe I was choking so hard,” she said later. Recognizing her distress, Dr. Heimlich, 96, did his thing. “A piece of meat with a little bone attached flew out of her mouth,” he recalled.

While best known for his namesake maneuver, Dr. Heimlich developed and held patents on a score of medical innovations and devices, including mechanical aids for chest surgery that were widely used in the Vietnam War, procedures for treating chronic lung disease and methods for helping stroke victims relearn to swallow. He also claimed to have invented a technique for replacing a damaged esophagus, but later acknowledged that a Romanian surgeon had been using it for years.

A professor of clinical sciences at Xavier University in Cincinnati and president of the Heimlich Institute, which he founded to research and promote his ideas, Dr. Heimlich was a media-savvy showman who entered the pantheon of medical history with his maneuver but in later years often found himself at odds with a medical establishment skeptical of his claims and theories.

Even the Heimlich maneuver, when he first proposed it, was suspect — an unscientific and possibly unsafe stunt that might be too difficult for laymen to perform and might even cause internal injuries or broken bones in a choking victim.

But the stakes were high. In the 1970s, choking on food or foreign objects like toys was the sixth-leading cause of accidental death in America: some 4,000 fatalities annually, many of them children. A blocked windpipe often left a victim unable to breathe or talk, gesturing wildly to communicate distress that mimicked a heart attack. In four minutes, an oxygen-starved brain begins to suffer irreversible damage. Death follows shortly thereafter.

Standard first aid for choking victims, advocated by the American Red Cross and the American Heart Association, was a couple of hard slaps on the back or a finger down the throat. But Dr. Heimlich believed those pushed an obstruction farther down in the windpipe, wedging it more tightly. He knew there was a reserve of air in the lungs, and reasoned that sharp upward thrusts on the diaphragm would compress the lungs, push air back up the windpipe and send the obstruction flying out.

His solution — wrapping arms around a victim from behind, making a fist just over the victim’s navel and thrusting up sharply — worked on dogs. His ideas, published in The Journal of Emergency Medicine in an informal article headlined “Pop Goes the Cafe Coronary,” were met with skepticism.

Anticipating resistance from his peers, Dr. Heimlich sent copies to major newspapers around the country. Days later, a Washington State man who had read about it used the maneuver to save a neighbor. There were other cases and more headlines. A 5-year-old Massachusetts boy saved a playmate after seeing the maneuver demonstrated on television. Testimonials flooded in. Dr. Heimlich was on his way to celebrity.

In a profession that frowned on self-promotion, he was regarded as a publicity-seeking eccentric, if not a crackpot. But as saved lives accumulated into a mountain of evidence, skeptics were mollified, state and federal health authorities endorsed the technique, and its popularity spread. Today it is known to millions from the internet, television, films, pamphlets, books, newspapers and magazines, talked up in families and taught in schools, often with videos provided by the Heimlich Institute. 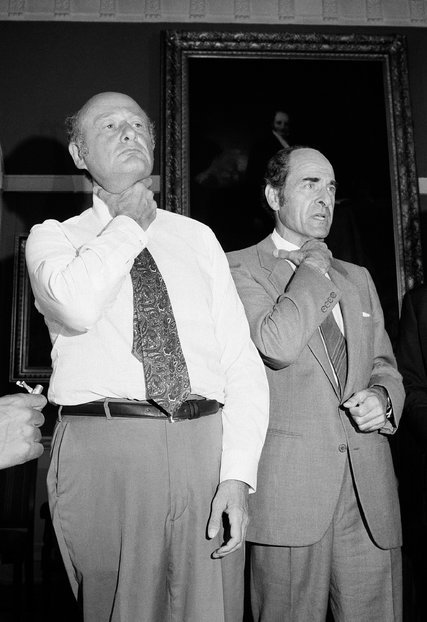 During a demonstration of the Heimlich Maneuver in August 1981, Dr. Heimlich, right, and Mayor Edward Koch showed how a choking victim should signal for help.

No one knows how many lives have been saved by the procedure, although reported choking deaths declined after its popularization. The Heimlich Institute claims 50,000 lives saved in the United States alone. A 2009 Op-Ed article in The New York Times estimated that 100,000 people had been rescued from choking. The American Medical Association, which endorsed the technique in 1975 and gave it the name Heimlich maneuver, says it saves unknown thousands annually.

Some medical authorities have been wary, partly because it can cause injuries. From 1976 to 1985, the Red Cross and the heart association told rescuers to give back slaps first, and only then go to abdominal thrusts. From 1986 to 2005, both recommended Heimlich thrusts exclusively. But in 2006 the guidelines essentially reverted to pre-1986 recommendations, dropped references to the Heimlich maneuver, and replaced it with the phrase “abdominal thrust.”

In 1984 Dr. Heimlich, the recipient of many honors, won the Albert Lasker Public Service Award, one of the nation’s most prestigious medical science prizes, for a “simple, practical, cost-free solution to a life-threatening emergency, requiring neither great strength, special equipment or elaborate training.”

Henry Judah Heimlich was born in Wilmington, Del., on Feb. 3, 1920, to Philip and Mary Epstein Heimlich. The family soon moved to New Rochelle, N.Y., where he attended public schools. His father was a prison social worker, and Henry sometimes went along on his rounds.

At Cornell University, he received a bachelor’s degree in 1941 and a medical degree from Cornell Medical College in New York City in 1943. He interrupted an internship at Boston City Hospital to join the Navy in World War II. He served with Chinese guerrillas in the Gobi Desert and Inner Mongolia. After the war he was a resident at several hospitals in New York City, and in 1950 he joined Montefiore Hospital in the Bronx.

In 1951 he married Jane Murray, the daughter of the dance studio entrepreneur Arthur Murray. They had twin daughters, Janet and Elisabeth, and two sons, Philip and Peter. A full list of Dr. Heimlich’s survivors was not immediately available. Jane Heimlich, who co-wrote a book on homeopathy and wrote “What Your Doctor Won’t Tell You” (1990), about alternative medicine, died in 2012.

In 1955, Dr. Heimlich proposed a method of restoring a patient’s lost ability to swallow, a condition called dysphagia, by reconstructing a damaged or diseased esophagus, using a section of the patient’s stomach. While the condition condemned victims to a lifetime of drooling and taking nourishment through an implanted tube into the stomach, his paper in the journal Surgery was virtually ignored in America. But a Romanian surgeon, Dr. Dan Gavriliu, wrote to Dr. Heimlich and said he had been using the procedure for four years. At the invitation of the Romanian Academy of Sciences, Dr. Heimlich visited Bucharest in 1956 to review the procedure. He returned to New York, successfully tried the operation, and it became a standard procedure in America. “Without question, Dr. Dan Gavriliu deserves credit for being the first surgeon to discover and perform the procedure that would come to be known as the Heimlich-Gavriliu Reversed Gastric Tube operation,” Dr. Heimlich wrote in a memoir.

In the early 1960s Dr. Heimlich invented a device to drain fluid from an open chest wound. Operating on battlefields in World War II, he had seen a need for something better than a standard drainage bottle with suction to pump air and fluid from an open chest. The key was a valve that would control air and prevent fluids from flowing back into the wound.

In a dime store, he found a Japanese-made toy noisemaker with a flutter valve. It worked in his device, and he took out a patent on what he called the Heimlich Chest Drain Valve. Widely used by medics on Vietnam battlefields, it also became common in civilian chest operations. By 1989, manufacturers reported annual sales of 250,000 worldwide.

In 1969 Dr. Heimlich became director of surgery at the Jewish Hospital in Cincinnati, and in 1977 he became professor of advanced clinical sciences at Xavier University. A longtime Cincinnati colleague, Dr. Edward A. Patrick, claimed in 2003 that he had codeveloped the Heimlich maneuver but had never been properly credited. He never took legal action to challenge Dr. Heimlich, however, and in 2008 he lost a libel suit against a Cleveland weekly newspaper that reported in an article, “Playing Doctor,” that he had misrepresented the extent of his medical training and his professional experience. Dr. Patrick died in 2009.

Since the 1980s, Dr. Heimlich had been widely denounced for advocating so-called malariotherapy, the deliberate infection of a person with malaria to treat cancer, Lyme disease and H.I.V., the virus that causes AIDS. He argued that malarial fevers could stimulate the immune system to fight more serious ailments. But health experts and government agencies have said such treatments are useless and dangerous. Human rights groups criticized experimental trials in Africa and China, calling them primitive.

Similarly, his promotion of the Heimlich maneuver to clear water from the lungs of drowning victims, and to treat asthma, cystic fibrosis and even heart attacks, was vehemently disputed. The heart association warned especially against it in drowning rescues, saying it endangered lives. Among his fiercest critics was his son, Peter, who campaigned extensively against what he called his father’s “wide-ranging, 50-year history of fraud.” In blogs, interviews with newspapers, television networks and other forums, he alleged that his father’s institute had conducted abusive medical experiments on AIDS, cancer and Lyme disease patients in the United States and third-world countries, and endangered people with maneuvers to rescue choking and drowning victims.

Undeterred, Dr. Heimlich advanced his ideas in articles and books, notably “Dr. Heimlich’s Home Guide to Emergency Medical Situations” (1980), and a memoir, “Heimlich’s Maneuvers: My Seventy Years of Lifesaving Innovations” (2014), and in speeches and television appearances. His animated series for children, “Dr. Henry’s Emergency Lessons for People,” won an Emmy in 1980.

“I can do more toward saving lives in three minutes on television,” he told Omni magazine in 1983, “than I could do all my life in the operating room.”