Home Lifestyle Health & Fitness Economic View: What Comes Next for Obamacare? The Case for Medicare for...

Now that Republicans have withdrawn Mr. Ryan’s bill from consideration, attention shifts to what comes next. In an earlier column, I suggested that Mr. Trump has the political leverage, which President Obama did not, to jettison the traditional Republican approach in favor of a form of the single-payer health care that most other countries use. According to Physicians for a National Health Program, an advocacy group, “Single-payer national health insurance, also known as ‘Medicare for all,’ is a system in which a single public or quasi-public agency organizes health care financing, but the delivery of care remains largely in private hands.” Christopher Ruddy, a friend and adviser of the president, recently urged him to consider this option.

Many Republicans who want to diminish government’s role in health care view the single-payer approach with disdain. But Mr. Trump often seems to take pleasure in being unpredictable, and since he will offend people no matter which way he turns, he may want to consider why liberals and conservatives in many other countries have embraced the single-payer approach.

Part of the appeal of Medicare for all is that single-payer systems reduce financial incentives that generate waste and abuse. Mr. Ryan insisted that by relegating health care to private insurers, competition would lead to lower prices and higher quality. Economic theory tells us that this is a reasonable expectation when certain conditions are met. A crucial one is that buyers must be able to compare the quality of offerings of different sellers. In practice, however, people have little knowledge of the treatment options for the various maladies they might suffer, and policy language describing insurance coverage is notoriously complex and technical. Consumers simply cannot make informed quality comparisons in this industry. 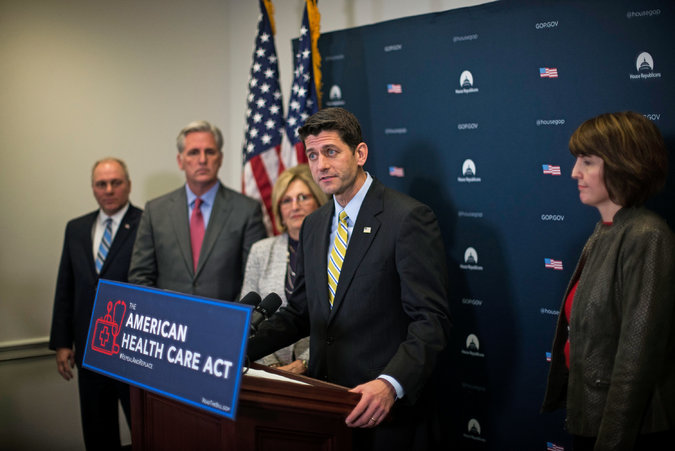 Paul Ryan, the House Speaker, at a news conference this month. His bill to repeal and replace the Affordable Care Act has drawn criticism from the right and the left.

In contrast, they can easily compare the prices charged by competing insurance companies. This asymmetry induces companies to compete by highlighting the lower prices they’re able to offer if they cut costs by degrading the quality of their offerings. For example, it’s common for insurance companies to deny payment for procedures that their policies seem to cover. If policy holders complain loudly enough, they may eventually get reimbursed, but the money companies save by not paying others confers a decisive competitive advantage over rivals that don’t employ this tactic. Such haggling is uncommon under single-payer systems like Medicare (though it is sometimes employed by private insurers that supplement Medicare).

According to the Kaiser Family Foundation, administrative costs in Medicare are only about 2 percent of total operating expenditures, less than one-sixth of the rate estimated for the private insurance industry. This difference does not mean that private insurers are evil. It’s a simple consequence of a difference in the relevant economic incentives.

American health care outlays per capita in 2015 were more than twice the average of those in the 35 advanced countries that make up the Organization for Economic Cooperation and Development. Yet despite that spending difference, the system in the United States delivers significantly less favorable outcomes on measures like longevity and the incidence of chronic illness.

But advertising expenses and administrative costs are not the most important reason the United States spends so much more. The main difference is that prices for medical services are so much lower in other countries. In France, for example, a magnetic resonance imaging exam costs $363, on average, compared with $1,121 in the United States; an appendectomy is $4,463 in France, versus $13,851 in America. These differences stem largely from the fact that single payers — which is to say, governments — are typically able to negotiate more favorable terms with service providers.

In short, Medicare for all could deliver quality care at much lower cost than private insurers do now. People would of course be free to supplement their public coverage with private insurance, as they now do in most other countries with single-payer systems, and as many older Americans do with Medicare.

As a candidate, Mr. Trump repeatedly promised that everyone in the country would be covered at reasonable cost under an amazing new health plan. But it is now clear that the A.H.C.A. could not have delivered on that promise. The president, who has not always had a close relationship with Mr. Ryan, may consider changing course and working across party lines to develop support for universal access to Medicare.

Then again, he may fear that move would be seen as a sign of weakness or defeat. But the research findings on loss aversion make one thing clear: Any setback from that change in strategy would pale in comparison to the damage he would have suffered if the A.H.C.A. had actually become law.