The executors have made clear they plan to honor Albee’s desires, even when they might be controversial. In May, for example, they refused to allow a tiny Oregon theater to cast a black actor as a blond character in a production of Albee’s most famous play, “Who’s Afraid of Virginia Woolf?,” citing the playwright’s intentions as expressed during his lifetime.

Now at stake, at a minimum, are the latest drafts of Albee’s final known project, “Laying an Egg,” about a middle-aged woman struggling to become pregnant. (Paradoxically, one plot element concerned her father’s will.) The play was twice scheduled for production at Signature Theater, an Off Broadway nonprofit in New York, and twice withdrawn by Albee, who said it wasn’t ready.

Even if the executors destroy Albee’s draft, other copies may exist — a Broadway producer, Elizabeth Ireland McCann, said she had at least a partial version of the script — but it is not clear whether Albee had done work on the project that only he had seen. It is also unclear whether Albee left any other incomplete manuscripts behind, or whether the language in the will could be interpreted to apply to early drafts of his published plays. 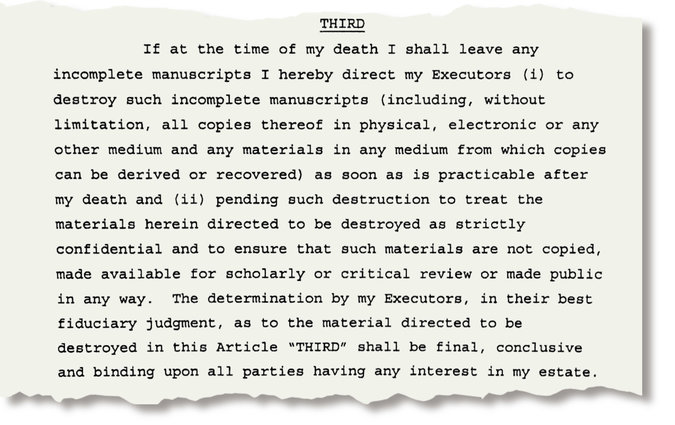 A section of Albee’s will describing how any incomplete works should be handled.

“Am I disappointed? Yes, because every tiny bit of everything that a writer has written provides insight into that writer’s creative process,” said David A. Crespy, president of the Edward Albee Society and a professor of playwriting at the University of Missouri. “But am I surprised? No. He maintained very strict control over the materials that were available to the public.”

Albee is best known for “Virginia Woolf,” a penetrating 1962 drama that was adapted into a film starring Elizabeth Taylor and Richard Burton. He won the Pulitzer Prize three times — in 1967 for “A Delicate Balance,” in 1975 for “Seascape” and in 1994 for “Three Tall Women” — and the Tony Award twice, in 1963 for “ Virginia Woolf” and in 2002 for “The Goat, or Who Is Sylvia?” He also won a Tony Award for lifetime achievement in 2005.

His work is frequently staged; a revival of “Three Tall Women,” starring Glenda Jackson and Laurie Metcalf, is to open on Broadway next year.

The playwright died in September at the age of 88. His will, which he signed in 2012, was filed in Suffolk County Surrogate’s Court; the provision in question says, in part: “If at the time of my death I shall leave any incomplete manuscripts I hereby direct my executors to destroy such manuscripts.”

Until the manuscripts are destroyed, the will says, the executors should “treat the materials herein directed to be destroyed as strictly confidential and to ensure that such materials are not copied, made available for scholarly or critical review or made public in any way.”

There is one potentially complicating provision, declaring that it is up to the executors to determine what material counts as incomplete, and is thus covered by the destruction instruction.

Sam Rudy, Albee’s longtime spokesman, said the executors would have no comment on the instruction or their handling of the estate.

“For writers, drafts of unfinished work can be quite sensitive,” said Doug Wright, a Pulitzer Prize-winning playwright (“I Am My Own Wife”) who is president of the Dramatists Guild of America. “These drafts are not public property; they belong to the author, and the author has the right to determine their fate.”

And James Bundy, dean of the Yale School of Drama, said “Edward’s choice strikes me as entirely in keeping with his own exacting standards.”

“It’s no more our business than it would have been if he had made a little bonfire of his work before his death, or shredded some manuscripts one day long ago — perhaps he did,” Mr. Bundy said. “It’s ultimately a good thing for artists to negotiate their own artistic destinies within the framework of the relevant laws: They have no more, and no fewer, rights than would you and I in the same situation.”

But lawyers who study the intersection of estate law and intellectual property say the issue is actually murkier. There is a long history of heirs substituting their own judgments for those of deceased artists, and little case law about whether that is O.K. Among the most famous examples: Kafka asked his friend to burn his diaries and manuscripts, but the friend instead allowed publication of the writer’s unpublished novels; Eugene O’Neill did not want “Long Day’s Journey Into Night” published or performed until 25 years after his death, but his widow allowed it within three years; Adam Yauch, one of the Beastie Boys, included a provision in his will barring the use of his music in advertising, but the provision’s validity was quickly questioned.

Eva E. Subotnik, an associate professor at St. John’s University School of Law, argued for some skepticism about such provisions.

“There is something special about these kinds of assets — they’re not just like a mansion or a fancy watch, but they’re socially valuable, and that has to play into the calculus,” Ms. Subotnik said. “I definitely argue against full-throttle enforcement of artistic control after death.”

But another expert on the subject, Lior J. Strahilevitz, a professor at the University of Chicago Law School, disagreed. “Part of what we value in a great artist is not just raw ability but the ability to curate, and it’s frequently the case that artists build great reputations by being selective about what they show to the world,” he said. “It’s problematic to force Albee to share these plays when he didn’t think they were good enough.”