She eventually chafed under the contract she signed with Mr. Douglas. He wrote that he ended the deal because she was impatient about the money she was being paid. But she insisted that she ended it after he lent her to Universal Pictures for “Four Girls in Town,” which she called a “very bad film.”

“I thought if he would do this for money, I would leave,” she told United Press International in 1961.

In “Hatari!” (1962) she portrayed a photographer nicknamed Dallas working with a group, led by Wayne, trapping African wildlife for sale to zoos. Her character’s attachment to the film’s scene-stealing elephant calves was captured memorably in scenes featuring the composer Henry Mancini’s song “Baby Elephant Walk.” 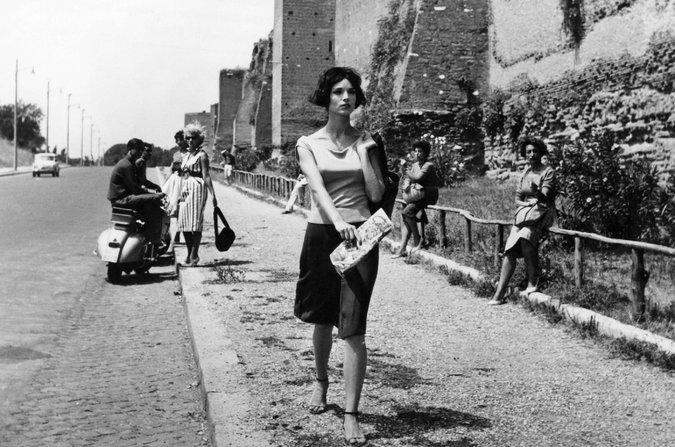 She told the website Cinema Retro in 2012 that she had gone to the location a month before the rest of the cast when the elephants were being born. “You see, the trick is to feed them right away,” she said. “That’s how you become their ‘mother.’ So they got used to me and would follow me everywhere.”

Her character was also Wayne’s love interest. “Signorina Martinelli not only attracts elephants,” A. H. Weiler wrote in The New York Times, “but also has eyes for that rugged ‘bwana,’ Mr. Wayne.”

Elsa Martinelli was born in Grosseto, in southern Tuscany, on Jan. 30, 1935. Her father Alfredo, was a railway station chief; her mother, Santina, was a homemaker. Young Elsa delivered groceries and worked as a bar cashier before her modeling career took off in her midteens after she was discovered by the rising designer Roberto Capucci. She was featured in his first collection and modeled in Paris and New York for Ford Models.

In 1956, she was described by The Sydney Morning Herald as “a kind of Audrey Hepburn with sex appeal.” The great Italian director Vittorio De Sica subsequently called her “the most stylized woman in the world.” Life magazine, in a photo spread, extolled her fashion sense but noted how limited her film wardrobe had been.

In “The Indian Fighter,” the magazine said, “she took off the squaw dress only long enough to cause a momentary sensation by wearing nothing at all.”

In 1957, she married Count Franco Mancinelli Scotti di San Vito — his mother reportedly objected to the union and expelled him from their palace in Rome — but, her daughter said, the marriage was annulled after several years. In 1968 she married Willy Rizzo, the Paris Match photographer and furniture designer, who died in 2013. She also worked as an interior and fashion designer.

In addition to her daughter, Ms. Martinelli is survived by two grandchildren, two great-grandchildren and several sisters.

In an acting career that shifted between Europe and Hollywood and peaked in the 1960s, Ms. Martinelli won the Silver Bear for best actress at the 1956 Berlin International Film Festival for the Italian comedy “Donatella.” Directors she worked for included Orson Welles (“The Trial”), Roger Vadim (“Blood and Roses”) and Elio Petri (“The 10th Victim”).

After the Locarno Film Festival in Switzerland paid tribute to her in 2012, she told Cinema Retro that she watched her films but thought of herself onscreen as someone else. “And then it happens that you say to yourself, ‘She could have done this,’ or ‘She could have done it that way,’” she said. “Yet mostly I say, ‘She was O.K.’”