Nonetheless, salt therapy, also known as halotherapy, a venerable treatment in Central Europe and Asia, is now being offered at spas, resorts and stand-alone facilities in the United States in the form of salt beds, salt rooms and salt booths. Floors and walls that are lined with salt blocks and salt crystals, and zero-gravity chairs (recliners designed to relax the back), are the norm. A device known as a halogenerator grinds sodium chloride into a dry aerosol, then disperses it to mimic the microclimate of a salt cave.

Perhaps unsurprisingly, salt spas seem to be sprouting in pockets of the United States that attract the rich. For example, at the Montauk Salt Cave, which opened two years ago in the Hamptons, a session costs $40 for adults. There’s a children’s hour ($40 per child, but adult guardians may enter free) as well as yoga classes and reiki healing amid the Himalayan salt. At the Wellery, a pop-up “wellness center” at Saks Fifth Avenue in Manhattan, weary shoppers can refresh themselves in one of several salt booths (10 minutes for $25) until the end of October.

“The ability to look at salt and see its helpful properties has become a significant part of our business,” said Allan Share, the president of the Spa Industry Association. 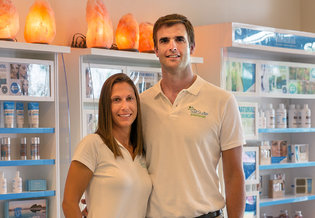 Jessica and Elliott Helmer, owners of the Salt Suite.

In 2012, there were a dozen halotherapy facilities — places with halogenerators — in North America, according to Leo M. Tonkin, the founder and chief executive of Salt Chamber, a supplier of dry salt therapy equipment, based in Boca Raton, Fla.

“In the last four years, the number has grown to 300 salt chambers,” said Mr. Tonkin, who is also the founder of the Salt Therapy Association, a trade group. “There’s been a rapid growth in stand-alone salt facilities and in resorts adding a salt room as an amenity. Day spas have taken an underutilized area and turned it into a salt room, and clubhouses of some high-end residential developments are adding salt rooms.”

Economics are a big driver: A visit to the sauna or steam room is generally included in the basic spa fee at hotels and resorts, but salt rooms often cost extra.

Adding salt therapy to spa services is another moneymaker. At the Four Seasons Resort in Oahu at Ko Olina, 25 minutes in the salt chamber costs $65. The so-called Ha Ritual — which involves 50 minutes in that chamber, with guided meditation, a dry salt foot scrub and a massage — runs $190.

But there are occasional bargains. At the Breathe Salt Room on Park Avenue in Manhattan, the “salty yoga” classes are $35, the same cost as a standard salt session.

When the Linq Hotel and Casino in Las Vegas opened a new spa two years ago, its two salt caves with halogenerators were a way “for us to differentiate ourselves,” said Joy Matti, Linq’s spa operations manager. “Several spas on the strip have salt rooms, but don’t have halogenerators.”

Linq’s salt caves feature zero-gravity chairs and soft music. Guests who book a spa service for at least $50 are welcome to breathe in the saline air at no additional charge. Otherwise, a 45-minute session runs $40. “We have guests who try it, then come back the next day because they got the best sleep of their lives,” Ms. Matti said.

The caves accommodate up to eight people “and are generally booked from 8 a.m. until the last session at 6 p.m.,” she said.

Entrepreneurs have taken note. Mr. Tonkin estimates there are 100 stand-alone salt facilities around the country, generally two- or three-room studios that charge $30 to $50 per session, though discount packages and membership arrangements can lower the price considerably.

Many of these spa owners have a side business in salt lamps, bath salts, skin scrubs and Solé, a concentrated salt solution, to create another revenue stream. To appeal to parents who believe that halotherapy can relieve symptoms of allergies and eczema, some facilities have a dedicated children’s room, with salt on the floor to suggest a sandbox or beach and fish-themed murals.

The décor can be a big part of the lure. Some of the spaces are outfitted to look like Zen relaxation rooms, some resemble caves, and some have backlit blocks of amber and pink salt.

“It’s a great business model because it’s low labor,” Mr. Tonkin said. “You don’t need instructors. You don’t have people providing services. And once the facility is built, the operational expenses are low. The only consumable is the sodium chloride that goes into the halogenerator.” A 10-pound bag is $25, he said, and is enough for 200 to 400 sessions in a salt room depending on the size of the room and the length of the session.

“It’s pennies a treatment,” Mr. Tonkin said. “This is a very lucrative business for an owner-operator.”

Five years ago, Jessica Helmer and her husband, Elliot, of Delray Beach, Fla., were looking for a business opportunity. “We were ready to do our own thing,” said Ms. Helmer, 36, who had previously worked in corporate sales.

When a friend came back from a trip to California raving about the halotherapy center that had soothed her allergies, the Helmers were sold. In 2012 they opened the Salt Suite, a wellness center in Delray Beach with three rooms.

“It was a slow ramp-up but in Year 2 it jumped,” said Ms. Helmer, who subsequently opened a salt studio in Lake Worth. She and her husband have since sold Salt Suite franchises in Fort Lauderdale, Boca Raton and Palm Beach and have fielded inquiries from people in New York, New Jersey, California and Texas “without even doing any marketing,” she said.

A single session is $35 and an unlimited monthly membership is $99. The Helmers’ clients — mostly mothers bringing their asthmatic children, and adults over 45 with assorted respiratory ailments — visit an average of one to three times a week.

Finding the right locations has been a challenge. “This isn’t a massage or haircut,” Ms. Helmer said. “It’s like a gym — it needs to be accessible so it can be part of your daily routine.”

But first, Ms. Helmer has to explain exactly what she’s selling. “No one has heard of salt rooms, so we have to explain what they are and explain that people have to come in for three or five sessions in order to see a small change,” she said.

But the low profile of salt rooms is also a selling point. “People are intrigued,” Ms. Helmer said. “We have the ‘Aah!’ factor. And now some of our customers are interested in franchising a studio.”

William Dunai, the owner of the Salt Cavern in Clifton, N.J., opened his doors in 2010 and struggled for three or four years. Groupon deals helped build the business, and now, during busy times on weekends, it operates at 95 percent occupancy.

Each of the two rooms can accommodate up to seven customers. A 45-minute visit is $50, but there is a buy-one-get-one-free option as well as an eight-session package for $150. “Some people meditate or pray or sleep while they’re here,” Mr. Dunai said.

Regulars come once or twice a week, though some clients show up only when they are sick. One customer has been coming daily since December, Mr. Dunai said, “and he told me he’s going to keep coming as long as he stays well.”